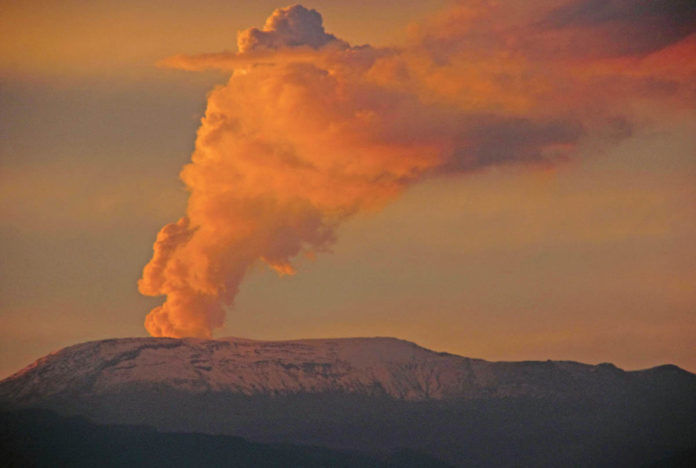 I am shivering in front of a sign depicting the evacuation route in case the volcano suddenly erupts. Not because I am afraid, but because I am freezing. My light jacket is perfect for winter in Texas, but nowhere near perfect at 4,800 meters in the Colombian Andes. I fail to honor my own advice to check my weather app every morning to discern if a swimsuit or parka should be pulled out of the suitcase.

As first light arrives and an hour’s drive from Manizales, capital of the Caldas department, I arrive at Los Nevados National Park. Towering over the Central Cordillera, PNN Los Nevados may be a mere 130 kilometers west of balmy Bogotá, but at the base of one of this country’s most active volcanoes, the climate is unforgiving, requiring a ski jacket and mask. As I scramble to complete my artic attire, a fellow bird watcher from South Africa lends me her scarf. I slowly stop shaking.

The Nevado del Ruíz is the highest of three volcanoes in the Coffee Axis. With a summit topping 5,320 meters it can be seen on clear days from the departments of Tolima, Quindío, Caldas and Cundinamarca. Even though its snowcapped crater releases volcanic ash constantly, the last major eruption took place on November 13, 1985, causing the worst volcanic disaster in South America and fourth worst in the world. As the Nevado del Ruíz erupted, lava mixed with glacial melt created a destructive mud flow that raced through a nearby valley, leveling the town of Armero and killing 25,000 people.

In May 2016, the volcano rumbled once again sending a 1,300-meter plume of ash into the sky blanketing Manizales in a fine soot, causing nervousness and the closure of La Nubia airport. The volcano still sends regular reminders that it is hardly dormant, and tremors are monitored permanently by Colombia’s seismic institute, Ingeominas. A live web cam of the Nevado del Ruíz can be viewed on the Volcano Discovery website. I resolve to show my guide every evacuation sign as I walk a narrow trail of black volcanic rock, and silent reminder of this mountain’s deadly force.

A craving for hot chocolate and a chance to see flowing smoke from the volcano as I sit in a small café – that has remained closed for breakfast among birdwatchers – means that I must continue to follow the path.

Then, all of a sudden, my colleagues dash for their cameras and madly begin taking pictures of the horizon. I expect to see a fabulous rare bird that has caught their attention, but from the murky disadvantage of my ski mask, I gasp at the enormous snow-covered volcano blowing steam and smoke with full force. According to Johnnier Arango, our guide, clouds and steam usually hide the summit from view. And he is right, as after fifteen minutes, the scene disappears not to reappear for the rest of the day.

A group of five stagger into the café that just switched from “cerrado” to “abierto” with four tables and a waist-high bar. As cooks stir steaming pots on sizzling stoves, we order plates of chorizo, fried potatoes, beans, scrambled eggs and arepas. Hot chocolate is swerved in cups so large I use both hands to bring the delicious potion up to my numb lips. Leaving not a crumb and filled with warm energy, Juan decides to takes us even higher and closer to the volcano at Las Brisas’ visitor’s center.

The summit of the Nevado del Ruíz is covered by several glaciers 50 meters thick and as the steam melts, the blue glacial walls, ice cold streams flow into the valleys providing drinking water to some 40 villages, as well as the mountain tapir, puma cougar, deer, spectacled bear and Herveo plump toad. At this elevation, the thin air stumps forests and swathes woody bushes in dew, providing a unique habitat for 15 bird species known to the slopes and folds of the volcano.

Hikers from around the world descend on Las Brisas to start a once-in-a-lifetime trek. A special permit is required from Parques Nacionales to climb within 200 meters of the summit and an experienced guide is most recommended as one trundles through this rugged habitat of lava rock, fog, glacial ice, steaming hot creeks and barren slopes.

Our morning is spent walking safer paths and spotting birds, sweet rabbits, lazy lizards and interesting vegetation, one which only active volcano terrain could support. As we make our way slowly down the valley’s walls, we find warmth and my fingers begin to thaw. I learn on this birding outing that where there is hot lava there is also hot water.

For lunch we arrive at Termales del Ruíz, and a favorite spot for weary hikers to soak sore muscles in the hotel’s pool fed by the Tierra Viva thermal springs. A landscaped garden is filled with bird feeders where colorful hummingbirds also stop for sustenance. As the pool and meandering terrace assumes a heavenly appearance, visions of smoldering lava, blistery wind and an ever-present danger dissipates with the steam.

What one needs to know about Colombia’s vapour trail:

Colombia’s Institute of Geology and Mining (Ingeominas) permanently monitors this country’s most active volcano – Nevado del Ruíz. Currently at Orange Level 2, a major eruption has the capacity to impact some 500,000 people who reside within the volcano’s range, including the coffee region’s main cities of Armenia, Pereira and Manizales. According to researchers, the summit’s ice cap is melting at a rate of 4% every year and has been reduced to just 7,33 square kilometers.

At the base of the Nevado del Ruíz is the small, conically shaped Machin volcano disguised as a grass-covered hillock. Dormant for thousands of years it is located near the main road that unites Ibagué in Tolima and Armenia in Quindío. Last month, Ingeominas recorded activity placing Machin on a yellow alert. The volcano’s crater has a diameter of 2,4 km.

The Nevado del Huila is graced by three peaks that tower above the department it is named after, and can be seen on cloud free mornings from Bogotá. Just as the Nevado del Ruíz, Huila’s glaciers are also retreating, losing an average of 2% of its total 7,5 km surface every year. The peaks are off limits to hikers given dangers posed by avalanches and dangerously steep rocky terrain. The last registered seismic activity was recorded in 2008.

As one crosses overland between Colombia and Ecuador, the Cumbal volcano dominates the landscape and its ice cap is sought after by “snow merchants” who daringly climb above the clouds to pack millennial ice to be sold in local markets. With a small crater of 600 meters, this composite volcano last erupted in 1926, blanketing Ecuador’s capital Quito in ash.

Visible from the capital of Nariño, Pasto, Galeras been erupting frequently since the Spanish first began recording its activity. Known as Urcunia by the indigenous groups that inhabit these high plains of the southern Andes, this stratovolcano has been active for at least a million years and is considered the most active volcano in all of Colombia, followed by the Nevado del Ruíz. The last major eruption took place on August 25 2010, forcing Ingeominas to declare an emergency and enacting contingency plans for the evacuation of Pasto and nearby Sandoná. Around 8,000 people live in the high risk zone of Galeras National Park.

With three craters and rising 4,580 meters, the Sotará volcano is close to the colonial city of Popayán in Cauca. With an irregular shape, this little known stratovolcano called Cerro Azafatudo by locals has never erupted, yet is still considered active by geologists.