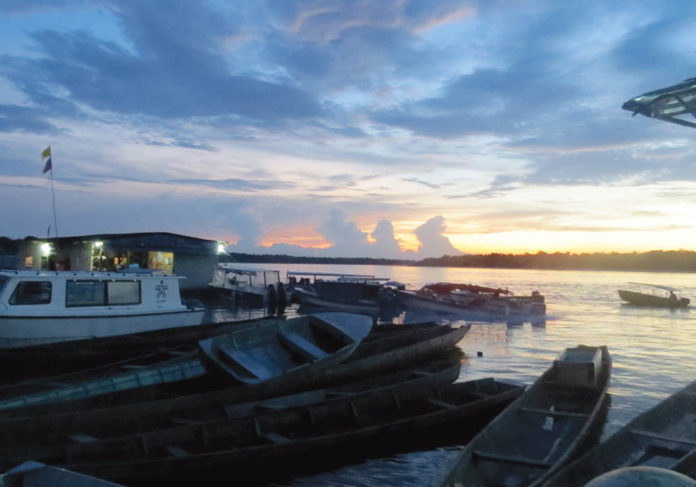 The small green and yellow boat carried me swiftly along the murky Inírida River, through the heart of the fertile Varzea rainforest and down memory lane. My love affair with the jungle began at a young age, when I would beg my mother to let me stay up and watch Tarzan on television. Living in arid west Texas at the time, I barely knew what a real tree looked like and was fascinated by the lush greenery I had seen on screen. Many years later, as the river dock came into view, I seriously considered staying on the boat.

Four days earlier and beyond excited about my first trip to the Colombian Amazon, I boarded a short and crowded flight from Bogotá to Inírida. Adorned in fashionable rainforest clothing with binoculars and cameras hanging from my neck, I stood out among the rest of a group led by the Multicolor Birding Colombia Company. As we stood there, sweating profusely in the afternoon heat, there was no doubt we had arrived.

Inírida is the largest town in the department of Guainía with a population of 10,000. Founded in 1963, it is one of the youngest towns in Colombia, situated just 25 kilometers from the Venezuelan border. In 1974 after several changes, the village was officially named Inírida after a flower that is endemic to the region and of course the river it is located by. The name is also a tribute to the mythical Princess Inirida who, according to local lore, ran crying into the jungle from a broken heart and was lost forever.

After settling into our hotel, heavy rainfall brings the temperature down a couple of degrees and the “sleepy town” suddenly comes to life with the buzz of three-wheeled motocarros racing along narrow streets. Exotic fruits and vegetables are precariously stacked on busy sidewalks, church music merges with Latin Pop beats and smiling shopkeepers wave from behind colorful t-shirts, pink umbrellas and chicken roasting on a spit. Pablo Flórez, our guide and essential translator, points me in the direction of a shop where, for $10,000 pesos I can purchase a pair of knee-high rubber boots to complete my jungle attire.

I soon come to learn that the river is home to trails that will take us to the birds. Originating in the Tuhani mountains of the Guaviare, the Inírida joins the Guaviare on its journey eastward, merging with the Orinoco near the Venezuelan town of San Fernando de Atabapo.

I occasionally take a kayak out onto the lakes and rivers of Texas in search of birdlife, but nothing could have prepared me for the sights and sounds I would experience in this corner of the Amazon. Under a canopy of giant trees we pass tropical flora, children playing on the banks of the river, women washing their laundry, river taxis piled with people and their bundled cargo, stunning sunsets and the occasional military outpost.

For the people living in the hamlets along the Inírida River, fishing is their primary source of income, with 70% of all fish caught being sold in Colombia’s major cities. Over four hundred different types of fish have been documented in the river, and the Inírida is consequently the most important source of ornamental species that make their way to markets overseas. As we glide along this liquid highway, we spot a typical family dugout hewn from a hollow tree trunk, parked in front of thatched huts dwarfed by towering ceiba trees.

During the rainy season from April to November, the river’s water level has been known to rise over four meters, flooding large areas of the town of Inirida. Although it is still early in the season, I slosh along trails that have been used for thousands of years to connect villages in this dense rainforest. Even when it floods the river gives life to local communities. The natural process periodically brings fertile soils from the forest into the river, creating a plentiful and nutritious habitat that can support a wide variety of fish and wildlife, including the freshwater Amazonian dolphin. Also known as the pink dolphin, tonina, boto or bufeo they sport a unique nose that is designed to forage in channel banks when the water rises, and their rosy hue comes from rich forest tannins released in flood waters that turn the river a dark red color.

During the entirety of my Amazonian adventure, I saw only two of these magnificent creatures. The species of dolphin is highly endangered and in a vulnerable state of conservation due to their indiscriminate killing for use as bait in order to catch smaller fish – especially the mapurite catfish which is highly desired by Colombians.

When the flooding recedes, silt carried by the river from the heart of the Amazon retreats into the forest and increases the rate of plant growth, resulting in a healthier ecosystem. My expectations of the jungle were high and although I did not see a single monkey, the magic of the Colombian Amazon truly touched me. Ignoring the common sense of any traveler, I packed my rubber boots in a musty bag and hauled them back to Texas. At least I know I’ll be ready for the next Amazonian adventure.