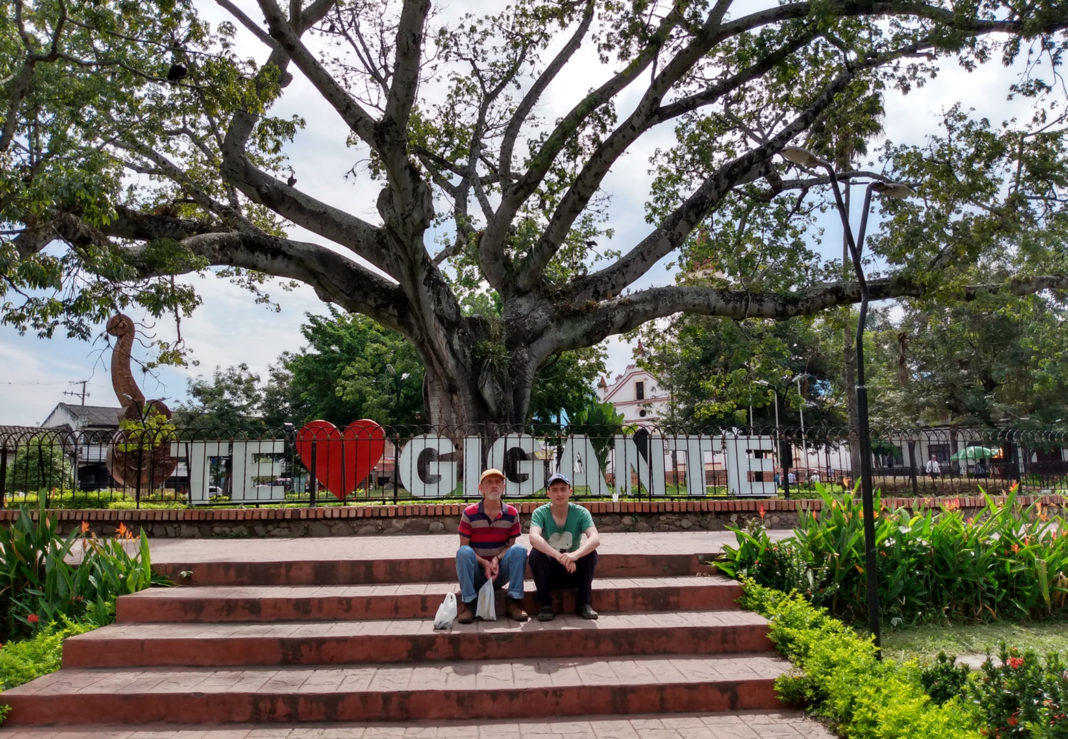 Decades ago, recently arrived, I reconnoitered the country by bus, excited, bewildered (and sometimes appalled). Later, circumstances changed, so busting out of the confines of Cundinamarca for literally the first time in four years was like returning to the deepest Colombia I’d all but forgotten. Conclusion: plus ça change, alleviated by much genuine progress, qualified by hard doubts about the latter’s sacrifice of humanism and aesthetics.

The former exemplified by the same hour and a half it takes us to exit Bogotá from the south (by car this time), to meet a savanna still poisoned by the effluents in the Río Bogotá, which peak to plunge over the Tequendama Falls, once the Niagara of honeymooners, now an evidence of the futile waste of the millions of dollars spent by the State’s environmental agencies. To the right of the toll booths, there is a glimpse of the Tequendama caves, the oldest archaeological site (1000 B.C) in the country, followed by the familiar long swoop down from the altiplano to the temperate, then the hot lands, with that subtle transition from eucalyptus and pasture to coffee and plantain to vast plantations of rice, cotton and sorghum on the central agro-industrial plains of Tolima.

Still, the highways there are great, enabling us to bypass Neiva, among other cities you used to have to go through, and thanks to our chauffeurs (my wife and son), we comfortably reach Rivera, Huila, around 9:00 that night, the entrance marked by modest country hotels for vacationers attracted by its thermal springs, yet because of (or maybe despite) that, Rivera conserves the atmosphere of similar old-fashioned towns I used to know. I search for a decent cup of coffee, my acid test of local pride, and enjoy it at a café by the plaza, where I have my photo taken before the bust of the famous Colombian writer, José Eustacio Rivera.

After another hour, we arrive at Gigante, where, all asleep, we wake up the owner of a hotel, bed down, breakfast in a lady’s backyard, and drink another excellent coffee by the main square, famous for its huge ceiba-tree. Yet whether it was planted to mark the Independence of the country or the emancipation of its slaves (in 1851), it is not the origin of the town’s name, which arose from the unearthing of some fossilized bones in the nearby mountains in the 18th century, probably of a mastodon, which the criollo savants swore were the remains of pre-historic human giants! The ones who presumably strummed on the 14 meter-high statue of a guitar nearby.

From there, a landslide sent us on an alternative route, via Guadalupe, ascending through arid scrubland with distant views of what looked like a vast inland sea but was actually the El Quimbo hydroelectric reservoir, admirable, if it weren’t for its environmental harm and uncompensated evictions, followed by a humid valley, thick with guadua-bamboo and jungly creepers, the antechamber to the coffee zone we were heading for, except a faulty GPS sent us back and forth again before arriving at hilly and hot Garzón.

Our Gol then clambered up to the rendezvous with our host, a hamlet called Puerto Alegría which gives you an idea how such cities started: here, a score of low concrete-block or timber buildings, scattered along an unpaved road, which hardly makes a dent on the countryside but oddly includes a beauty salon, two evangelical churches and the most remote internet place I’ve ever seen. We transshipped to a jeep and the road now steeper, rode though a replica of the Antioquia landscape displayed at Juan Valdez. Mountain upon mountain, their sheer sides carpeted with coffee, interspersed with forestlands, roaring streams, and miniature plateaus, the whole graced by eye-bending panoramas; Colombia at its best: uncontaminated, made by and for the little guy, and while rough, civilized, with its electricity lines, tiendas and primary schools and basic but comfortable farmhouses, like the pink-fronted one of our host, with its open-sided central corridor, wood-burning stove, herb garden and adjoining coffee-drying and – depulping sheds, all perched on a narrow row ridge above the plantation itself, so vertical and crammed with bushes walking through it would serve for a Desafío competition.

Surviving on coffee is less picturesque. Due to ever stricter quality standards, the small grower has to invest more and more on infrastructure, relying on loans from the National Coffee Growers Federation whose repayment relies on the always unpredictable harvest and international price. That’s aside from the growing scarcity of pickers, inflation of inputs and backbreaking labor needed to sustain any family farm, compensated for by the alternative occupation of our host, an ayahuasca shaman, indigenous by birth and coffee-grower by marriage to una huilense.

The ceremony on our last night, fortunately, fortified us for the return journey, which brought some disenchantment. Not with Garzón, which, despite being one of those once lazy provincial towns that have now turned into sprawling cities, still retains much of its low scale, traditional architecture and countrified atmosphere. Stopping at La Jarra by the plaza, we down a whole pitcher-full of fruit juice ($4,000 pesos with top-ups!), examine the eccentric, asymmetrical frontage of the Cathedral, plug cell phones into the free Wifi and notice a man, dressed all-white in a Rawalpindi-type tunic and skull cap, hawking full-length mirrors on a wheeled cart. A few blocks away, the garish Hotel Kahvé gapes at the marketplace, with its handsome brick frontage and wide arches, as if embarrassed a modernization which still functions as an outlet for regional farmers and supplier of their coffee sacks, baskets and donkey harness.

From there, we (with our hosts) make a pilgrimage to San Agustín and ride through a partitioned countryside I’m already familiar with from, for example, the highways around La Mesa/Anapoima, but only now do I fully perceive the ghastly invasion of rural Colombia by suburban villas, vacation consortiums, depots of fertilizers, villages with urban sprawl, etc., only relieved by a roadside exhibition of regional painters on billboards along the approach.

As art, it’s attractive but my doubts about the motive grow when we reach San Agustín, victim of the cultural equivalent of the resource curse which has led places like Venice to debase their historical or artistic renown to tourism (with the added caché of that equivalent of its Biennial). Picture one long thoroughfare, with adjuncts above and below, which mimics a barrio of Bogotá with chicken grilles, mini-marts, cell-phone outlets, etc., then add hotels, souvenir shops, and tourist touts.

Irrelevant? No, the build-up to the global commodification of culture: the $50,000 peso entrance fee for foreigners; the coffee shops at every vantage point; the guides, gates, guards (and contra-guerrilla squad); the whole “Do Not Touch” and “Keep-off the grass” ethos. On the positive side, the park nestles in and has conserved (or implanted?) what is practically an Amazonian rainforest, but it’s off-limits too. The culture we are meant to adore didn’t impress me either: their idols, crude; their pottery, unpolished, their metalwork, nil, so (except for the Lavapatas fountain) no big deal compared, say, to the Taironas.

After a farewell to our hosts, we spend the night in Pitalito and my mood darkens more at a portent of what every (once charming) provincial center in Colombia will be like soon. A plaza that is stripped of its heritage buildings, insults harmony of scale and surrenders to global brands. A noisy, traffic-clogged downtown full of chain stores and superfluous barrows of track shoes and papayas. A suburb like a fungus on all; no sense of neighborhood; apartment blocks that are not homes but sleeping bags; decrepit parks, roundabouts and phony malls for arrivistes. And, most telling, the fancy headquarters of the Federation in a coffee-growing hub where, despite a half-hour’s search, I couldn’t find a drinkable cup of it. Instead, fooled by the jazzy logos and tables with umbrellas at the café on the terrace of the ultra-modernist (and typically profligate) Mayor’s Office, I get a caffeine flavored dishwater.

Returning to Bogotá alone, I had another flashback to the late 1970s as my bus overtook everything in its way at a scrotum-tightening speed on an unimproved stretch of the highway and at every pause, was besieged by the same crowd of impoverished vendors of snacks. Enterprise, free for whom?

Neiva, where it stopped, was Pitalito but worse: a Sao Paulo-to-be rather than a civis like Athens which tamed the barbarians and fostered comfort, learn- ing a sense of belonging. Seeing it up close confirmed what Id already guessed from afar: its center, a heart eaten out by commerce; its parts plonked down every which way, in accordance with the whims of developers, the whole eviscerated by roads; and gated compounds of towering apartments to the horizon.

Due to the smoked windows, entering Bogotá by night made the factory-warehouse sector of the South look like a scene from Blade Runner and, finally home after twelve-hours non-stop, I expected to be disoriented for days, as in the era I mentioned, but was fine and slept well.