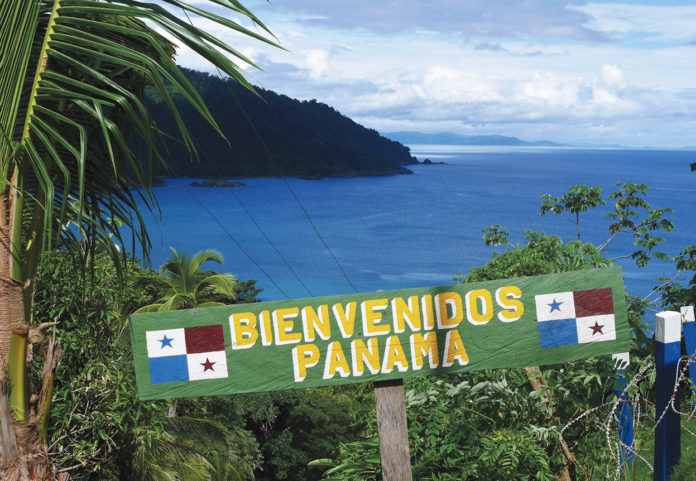 Like most travellers I dread crossing borders and being stuck at those soulless, sweaty, breeze-block-and-barbed-wire boundaries congested by trucks, touts and small-time smugglers while bored uniformed bureaucrats – who would also rather be anywhere else – pore over passports while plotting ways to impede our progress.

So, how odd to walk up a hill to Colombia’s checkpoint with Panama and find it deserted. Our arrival in another country is confirmed by a colourful hand-painted sign proclaiming ‘Bienvenidos a Panamá’, and a low wall of green sandbags surrounding some thatched huts that suggests this is the actual borderline. But no-one’s home.

“Oiga!” I call out, in case some officials are asleep in a hammock somewhere out of sight, but the only answer is from birds chattering in the palm trees that sway in the breeze.

We are standing on a jungle ridge with views back down to the Colombian fishing village of Sapzurro with its circular bay, where we set off walking half an hour before, and north to Panama’s sweeping and windswept coastline of green and purple mountains that tumble into a blue ocean. It is one of the most beautiful views I have ever seen, and certainly the prettiest border post.

“Looks like we just keep going,” I say to my travelling companion. We stroll down the stone steps to the Panamanian settlement of La Miel, much smaller even than Sapzurro, with just a handful of houses at the end of a wide arcing beach lined with coconut groves. Two yachts bob in a half-moon harbour that stretches between rocky headlands.

To walk into Panama, you first need to boat-hop up the Caribbean coast where Colombia has a sliver of the Central American isthmus. This corner of the country can only be reached by a sea crossing over Gulf of Urabá, or by small plane into the Chocó town of Acandí.

We take the Acandí option, flying from Olaya Herrera, Medellín’s downtown airport, in a 20-seat prop plane. The pilot has left his door open, so I cane my neck to watch his GPS map and weather radar and see how it compares to the sky outside.

We take off into rain and the radar shows thick bank of clouds to the west, but clear air ahead, and sure enough we pop out of the cordilleras over the grey-green plain of the Río Atrato, one of Colombia’s last untamed rivers that bisects the Chocó, and into the sunny skies of the gulf ahead.

But, storms are never far away in the Chocó, one of the planet’s rainiest places (13-meters of rain per year in some valleys) and the mountains to our left – the ones that mark the border with Panama – are now silhouetted against the dark sky.

I watch in amazement as ragged clumps of rain-laden mist break away from the mountain ridge and roll down towards the coast, like angry little clouds in an infant’s book. Even the weather seems alive.

We touch down in sunshine at Alcides Fernández Airport, a simple building named after a flying missionary priest who in the 1950s cleared airstrips in the jungle to better reach the peasant communities he founded through the northern Chocó. His Liberation Theology – and declaring himself a Christian Fidel Castro – caught the attention of Bogotá who sent armed DAS agents to the Chocó to investigate el cura subversivo. Shades of things to come, I think.

Meanwhile, two horse-drawn carts turn up to transport us through the small town of Acandí, and a motorboat to take us up the coast. Not many people linger in this run-down town with ‘AGC’ spray-painted on the walls, reminding us that the rural zone, here, holds the hideouts of the region’s cocaine cartel, known as the Gulf Clan, or Autodefensas Gaitánistas de Colombia as they call themselves.

But any fears evaporate in the human warmth of our Chocoano cart drivers as they urge their horses over muddy track. “Please fasten your seatbelts and take time to identify your nearest emergency exit,” jokes our driver as we huddle with our luggage, legs dangling over the side of the bouncing cart.

After the frenzy of Medellín, this bumpy ride through rural Chocó is both liberating and cathartic. Once again, traveling in Colombia, I find myself jolted into another dimension. And then another one, as ten minutes later we have transferred to an open motorboat and are cresting the surfline where a river-mouth meets the open sea.

Our boat hugs the jungle-clad coast, mostly cliffs and uninhabited, until we reach the sheltered bay of Capurganá, our base for the next few days. The small town here is the most touristy on this coast with dozens of hotels and even small resorts. In the high season it fills up with the boat-loads of tourists from the port of Turbo, in Antioquia, but this week- end is quiet with a few, mostly foreign, travellers.

We find an old wooden hotel on the waterfront, run-down but boasting a wide balcony with fine views of the palm-fringed bay, and a rickety plank table where you can imagine Er- nest Hemingway plonking his Royal Quiet de Luxe and a large daiquiri. “Papa H” would approve.

The clear water is tempting, but our first goal is to go inland, into the thick Darien jungle that cloaks the isthmus and effectively separates south and central America with an impenetrable green tangle. How bad can it be? We soon find out.

We follow a path out of town that leads to a viewpoint on the hills above. Immediately the going is tough. A light drizzle has started, and the trail is muddy and steep. We slip, we slide back, we fall down, we crawl, we pull ourselves up the slope holding onto vines and branches, some covered in spines. Cloying mud has just claimed my shoe.

Just a few hundred metres into the Darien and I am standing cursing on one foot, deep in mud, and holding a bleeding hand. Overhead howler monkeys are laughing at me.

But somehow, we sort ourselves out and make it to the viewpoint. I’ve been in many jungles over the years, but none quite like this. Unlike other rainforests, which can be unnervingly quiet, this one is chattering, fizzing and chirping like a greenhouse on steroids. Even the leafcutter ants seem bigger and stronger here.

The next morning, slightly battered by our jungle walk, I slip into the cool clear water – the most transparent I have ever seen – and snorkel along the shoreline to the town jetty. The corral is quite damaged by the boat traffic here, but fish are abundant.

In the deep water, at the wharf, I swim down and roll over to be entranced by huge shoals of fish, when all of a sudden, a large barracuda charges out of the shadows, hovers in mid-water sizing me up, and darts back to its lair.

The next day takes us on another short boat ride to Sapzurro, smaller and more tranquilo than Capurganá, but with its own lodges and restaurants and stone path leading to Panama.

Looking from the ridge, I realize the coastline north is more of the same: quiet sandy bays, fishing villages and an impenetrable inland. From here, travellers can coast-hop north to towns with air links to the rest of Panama, but our journey backtracks on foot, by boat and motorbike to the small airport at Acandí.

We get there in a downpour, but it stops, and the airstrip is soon steaming under a hot sun. The small terminal is deserted but we go in anyway. I look for the switches to start the ceiling fans. Other passengers turn up – many from the flight out three days before – then someone opens the drinks stall, then someone from the airline arrives to give us boarding passes and weigh the luggage on old mechanical scales.

The scene at the airport is so relaxed it is happening in slow motion. The reverie is rudely broken when a pack of powerful motorbikes roar to a halt outside and armed police, guns to the ready, swarm the squat airport building.

There is a palpable tension in the terminal as the exits are sealed and we are called one by one to present our documents and baggage for inspection. Then a plain-clothed officer films us as we file to the plane, which in the commotion has quietly pulled up on the tarmac apron outside.

As we take our seats and taxi out to the runway, I try to balance the two lingering images of my trip: an empty Panama border post and Acandí airport under armed lockdown. Yes, this corner of Colombia is a peculiar paradise.