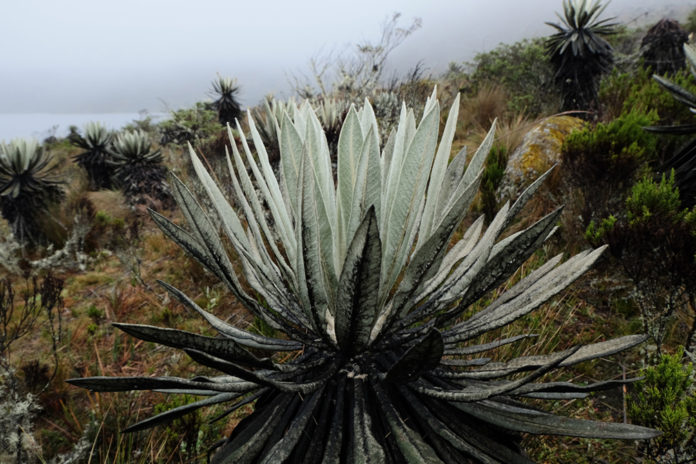 With Bogotá in my rearview mirror, the white van zooms past urban sprawl towards a unique part of Colombia, a landscape and habitat found almost exclusively in the Andes. Less than a three-hour drive from the capital sits the Páramo de Sumapaz. While smaller high-altitude wetlands — páramos — can be found in Ecuador, Peru, Venezuela, and Costa Rica, this location, which means “utterly peaceful moorland,” is considered the largest páramo in the world.

Our guide, Oswaldo Cortés from Bogotá Birding, says the area is sparsely populated due to the harsh climate and low vegetation. I find this hard to believe as I look out the window at a continuous stream of red brick homes shouldering a congested road full of farmers gathering at panaderías stacked with sweet pastries, women selling fruits of all colors, children walking to school, and dogs running in between broken, gray buildings revived by colorful graffiti. The van stops for cattle herded by ranchers on horseback, who stay sheltered from the rain with traditional knee-long ruanas.

The Páramo de Sumapaz was considered a sacred place for the Muisca indigenous people who dominated this area of central Colombia before the Spanish arrived. The location is associated with the creation of mankind, somewhere humans were not suppose to enter. But even with the inhospitable conditions, people came.

During the 16th century, German adventurer Nikolaus Federmann led an expedition across the Sumapaz searching for the legendary treasure of El Dorado. Various botanic research expeditions later documented the flora and fauna surrounding the lakes formed by retreating glaciers. Armed guerrilla groups, such as FARC and ELN, used the area in recent years as a passageway for moving hostages to camps in the Eastern plains. Today, the Colombian military has established a mountain battalion to secure the area.

As we climb higher, trees are slowly replaced by large stretches of farmland. Farming is risky here due to frost-endangering crops. So throughout the years, families living on less than 4,000 pesos a day struggled to raise cattle, altering the natural grassland and contaminating the water flowing downstream. In 1977, the 223,000-hectare Natural Sumapaz National Park was established to protect the main source of water for the Bogotá savanna. Today, this park is responsible for providing water for the entire city of Bogotá.

An hour later, after climbing to almost 4,000 meters (about 13,120 feet), I put on my wool jacket and gloves. Scrubby bushes intermixed with bright red, yellow, and blue flowers holding up old stone fences begin to border the almost-empty road. Over 200 species of vascular plants are native to the páramo; many are only found in Colombia. The rain stops, but the moisture continues to hang heavy in the air as I step out of the van, wondering if I am on a different planet.

Desert-like plants and an unforgettable view of the Andes surround me. Fields of flowering espeletias plants, also known as frailejónes, stretch across the hillsides surrounding dark lagoons below us. Oswaldo says the plants can live for more than a century.

The frailejón is well known for capturing water vapor from passing clouds in its spongy trunk and releasing the water in liquid form through its roots into the soil, thus explaining the lagoons nestled in the mountain valleys. It is also among those páramo plants whose properties help guarantee water security for the more than eight million people living in Bogotá. During the rainy season, it soaks up torrential rains to help prevent flooding, while its ability to retain water means it can continue to supply local reservoirs even after the weather turns dry.

The plant has adapted well to this cold windy weather and acid soil. But it is considered endangered. The long leaves resembling a rabbit’s ear, fuzzy and soft to the touch, are perfect for making rudimentary mattresses to sleep on by farmers and soldiers.

The spectacled bear, also called the Andean bear, lives in Sumapaz, thriving on the stems of the frailejón plant and berries. Fur colors range from black to brown with white markings around the eyes and nose that give the bears the appearance of wearing glasses. The only native bear species in South America, this solitary animal related to the giant panda bear can only be found in the Andes mountain range. Considered the second most endangered bear species in the world, they are very vulnerable to deforestation and poaching.

I am eager to get a closer look at an endemic bird, the Apolinar’s wren, singing in the reeds, but I’m warned not to venture out on my own as the ground is misleading. The rainy season lasts almost the entire year with only three months of drying sunshine. The ground remains soaked, and tiny vegetation covers shallow bodies of water, called “chucas” that are difficult to spot by the inexperienced visitor. No sooner does Oswaldo warn us when his left foot sinks suddenly up to his knees. I reach out to save his scope from getting wet and decide maybe he is not the person to follow.

My rubber boots squish below my feet on Sphagnum moss, a thick layer of humus that functions as a sponge slowly releasing its moisture to lower lying recesses. Covering most of the Sumapaz area, this brilliant green moss increases the soil’s capacity to hold water and nutrients. I hear a shout to look up as a green-bearded Helmetcrest — endemic and also dependent on frailejon plants — zooms overhead. I forget all about chucas and race to follow this scarce tiny hummingbird with tall feathers sprouting out of its head.

Laughing, out of breath, cold, and now very wet, we slosh our way back to the van as fog moves towards us, keen to dump more rain. A quick selfie with Oswaldo ends another perfect day in Colombia.