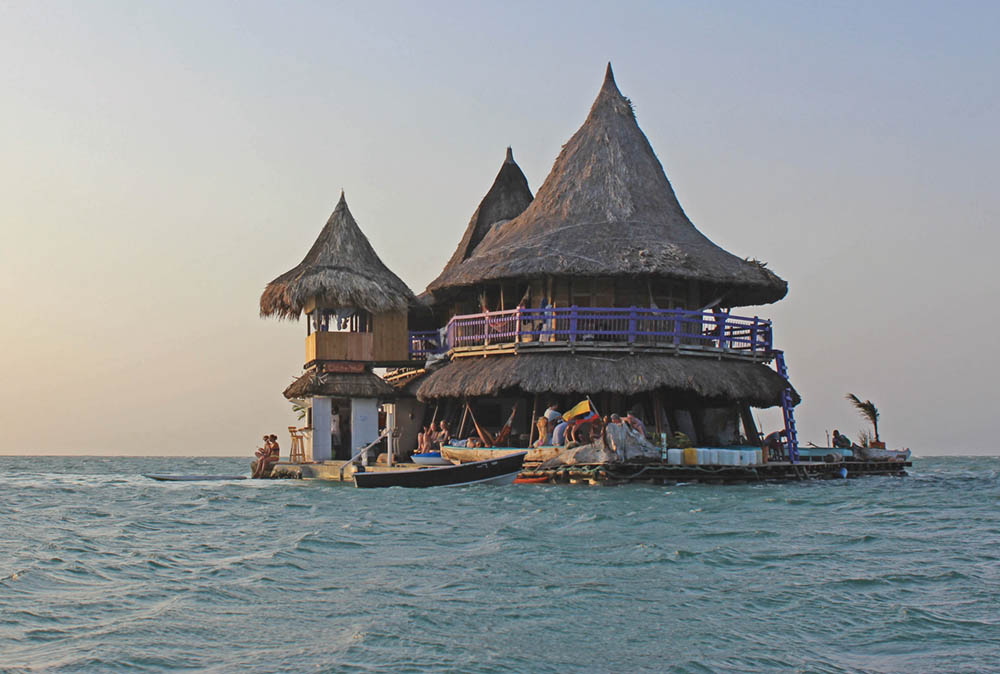 There’s a lot of hype surrounding Casa en el Agua. After all, it’s a hostel, on an island, hemmed in by the extraordinary colors of the Caribbean. Scratch that. The hostel is its own island.

Two bumpy hours in a speedboat from Cartagena and set among the string of islands that make up the Archipelago de San Bernardo, the Casa en el Agua is a well-kept secret, but one with a reputation that is quickly spreading thanks to social media.

Launched in 2010 and too recent to be mentioned in many guidebooks, this rocky island paradise offers travelers the choice of a private room, dormitory bed, or hammock, the latter often at the mercy of gusty oceanic winds.

The two-tier edifice one appreciates after two hours on the open sea was con- structed 20 years ago by a wealthy – and clearly eccentric – industrialist. After growing tired of living without running water and fending off the tropical storms, the thatched building was woefully abandoned until some – ex-girlfriend’s friend’s relative – snatched it up and decided it would be the perfect setting for the hostel to end all hostels. And it is, except for sun seeking, scantily-clad college castaways lounging in Wayúu woven hammocks.

Be prepared to pay an average of $90,000 pesos for a dorm bed and $20,000 pesos for a cocktail. The hostel has all the necessities a traveler could want, such as communal meals shared at a large table, an island bar with two Happy Hours, and hipster touches like a slack line. They also arrange various tours to the mainland in case you get stir crazy.

Given its remoteness to any form of connectivity, Casa en el Agua is about conserving nature’s essentials, such as fresh drinking water. An eco resort, borne out of necessity rather than marketing, the hostel is powered by solar power and guests must take bucket showers. There are no sinks and compositing is the only method of sanitation. As the majority of the staff hail from nearby Islote, the food comes right out the sea and is served up with fried plantain and a heap of coconut rice. Pick a live crab or lobster from the fisherman’s stash. Think farm to table in no time.

So, what do you do at Casa en el Agua? Most people seem content with the idea of simply basking in the sun, reading a book or cooling off with a dip into the pristine water. If you are a Type A personality there is underwater surfing with Subwing and best enjoyed in deep water as you are pulled out by a boat. As you glide and spin by titling the wings of a rotating swivel, Subwing unleashes your inner dolphin.

If you prefer to stay put on “land,” at least prepare for the majestic sunsets and sunrises. And if you are lucky, when the stars align and the moon is far from full, a spectacular light show can be seen every night when luminescent firefly squid sail past the Casa, like shooting stars in a rush out to sea.

With stars below and stars above, it is easy to lose yourself in the magic of being at one with nature. And to make sure you have a hassle-free experience on an island of almost one’s own, remember to bring cash as there are no ATMs on the archipelago. For more information on accommodation and updated prices for high and low season visit the hostel’s website: www.casaenelagua.com.