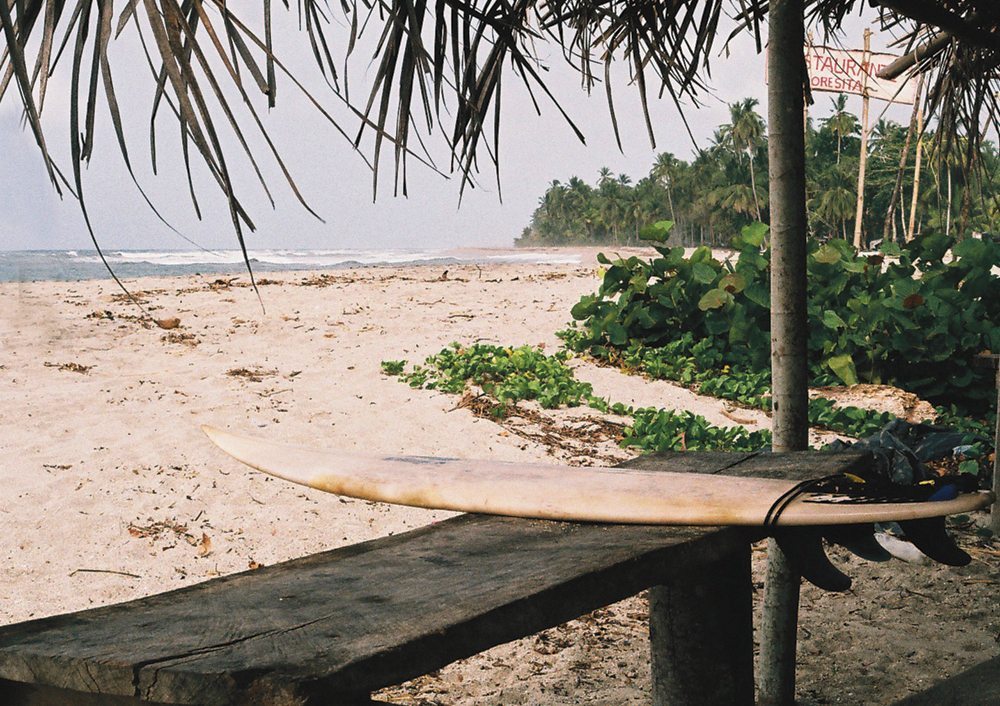 Ten years ago, two Canadian brothers fell in love with strip of sandy beach along Colombia’s Caribbean coastline and decided to build a hostel. Inspired by the bestselling novel The Beach, by English author Alex Garland, the two backpackers found themselves barefoot and surrounded by palm trees at the heart of Tayrona National Park and a place fondly known as costeño beach.

To get there, take the Santa Marta – Palomino bus, which departs every 20 minutes from Mercado – Santa Marta’s city market. But unlike most of other passengers heading to Arrecifes and Playa Blanca, you don’t get off at the main entrance to the park, and neither at nearby Palomino. Instead, disembark somewhere middle of nowhere, kilometer 36 (vía La Guajira) to be excat, in the township of Guachaca. On the side of the road, a wooden sign points you to the beach. A moto-taxi (for $3,000 pesos per passenger) will pick you up and dash through a tropical forest until you reach Costeño beach. For travelers looking to avoid the Tayrona daytrippers, this destination of surf and sun – just one hour from Santa Marta – is a great escape.

The perception of insecurity, which clouded many travelers’ perspectives of the Colombian Caribbean, helped preserve the pristine nature of the beach. Just a decade ago, when Palomino was a spot on the tourism map, Costeño received a sprinkling of committed surfers and even fewer adventurous backpackers. Then, the word got out on blogs. Charmed by the idea of discovering Colombia’s wildness, Brian Rea and his brother Colm, set out to build a hostel.

After studying international relations in Canada, Brian ended up in Barranquilla on an exchange program. The “gringo among costeños” quickly picked up the local accent and the relationship changed. Outside of class, Brian spent most of his time enjoying the local beaches but found Tayrona too crowded. The idea of opening a surf school surfaced. Colm came on board with him. Several surfboards later and a two year in the making project, the castaways opened their surf school. “It may not be the best surf in the world, but it is possible, and it is very fun,” said Brian.

But the school wasn’t the end of the road for this duo. They bought a small piece of land to open their first hostel. They called it Costeño Beach as a memory of how Brian and his friends in Barranquilla always mixed English and Spanish into their daily vocabulary.

An Australian friend, Dion, became the head of the surf school. Living in Costeño for five years, Dion has seen how tourism is growing. “Back when I first arrived, nobody knew about this place,” he said. “Today, every bus or taxi driver knows Costeño beach.”

Some of the original hostels have expanded their facilities, and the backpacking culture is being replaced by more affluent tourists.

Along with the changes, their hostel, once the only one in the region, has grown more than the founders expected. “It became too small and crowded,” said Brian. “So we sold it and bought a new bigger piece of land just next to it.” Last September, Brian and Colm began to build everything again from scratch. “Today we are almost done, but a hostel is never finished,” he said.

The brothers are confident about the future of this beach. Even though tourism is growing fast, they believe it is important to make sure that the newer arrivals maintain the spirit of a land that convinced them to call this place home.

“When you are the first one to build, you are also the first to change the beach,” said Brian. “We are not buisness men. We do it because we want to live here. We are just happy with what we have.”