It starts with huge potholes. The road, that is, as we wind our way down from Medellín and the Aburra valley toward Urabá. It is striking to see how the craters start appearing in numbers as you pass through Santa Fé de Antioquia: a well-preserved colonial village and highly-appreciated weekend hangout for the local ‘paisas.’

Judging by the state of the road, it looks like my destination — the northwestern tip of Antioquia — is a far less popular choice for getting away than I had imagined. I took it as a sign. I was entering a place left to its own destiny, forgotten by the state authorities and cut apart from the rest of the country.

Its name could be that of an imaginary world: the Urabá. I had heard and read many things about the area. It seems like a widely shared opinion that its considerable potential is neglected and that it could become another open door to the world for Colombian trade, thanks to its link to the Caribbean through the Urabá gulf.

It is also known for having been hit hard by guerrillas in their land grab against the productive landowners of the area, many of whom were forced from their farms.

It is also a region with rich Afro-Colombian traditions and a diverse indigenous population, due to its proximity to the Chocó and a shared river — the Atrato.

With more security presence in the region these days and large-scale investment in the banana growing and harvesting industry, the Urabá is seeing better days and even a handful of tourists, like myself.

Once I left the curvy mountain road and reached the plains, it’s the heat that gets to me. The Urabá sun seems unforgiving and it hit me as we stopped in the village of Mutatá for what I thought was the last thing I needed, in such a climate — a hot fish stew!

Sitting on a wooden bench, covered in sweat, while dipping my fingers into the bowl to reach for the fish made the whole experience quite unique. I gathered the green parrot that cautiously observed the whole process thought the same.

In the “gateway” of the Urabá, one can appreciate the ethnic diversity of the locals. The vegetation switches from patches of vibrant green open fields and endless banana plantations to misty hills where the palm roofs of indigenous cabins emerge.

The landscape is amazingly beautiful. The day I arrived, the air suddenly grew damp, the sky closed up and the wind rose until a generous tropical downpour began to fall. It did not last, however. The clouds soon passed and gave way to the scorching sun.

No wonder these plains are full of rivers, I think to myself, and that swimming in the creeks is a popular pastime.

The first day of my Urabá odyssey ends in the main square of Chigorodó under the welcoming shade of a rubber tree. The community is peaceful and the streets clean. Locals can be seen riding their bikes around a modern church, its doors wide open to let the breeze through or welcome in the faithful.

It’s a comforting sight, especially if one recalls, that just a decade ago, 18 people were killed here in what is known as the Chigorodó massacre. Since those dark days, new businesses have appeared, among them several austere hotels and informal restaurants.

Just a few kilometers down the Pan American Highway lies one of Urabá’s main commercial hubs, Apartadó. This city of 100,000 inhabitants seems to live up to its name as being somewhat “apart” from the rest of the department.

And in a way it is. The road that leads here is cracked and gives way to gravel. There is little association with the Antioquia best represented in quaint villages and the modern metropolis.

An even more surprising sight is the town of Turbo. It lies in a perfect setting to be the main port of Antioquia, but it is chaotic. The vast majority of the population comes from the Chocó, and wandering in the streets took me years back to the sweet memories of African travels in Mali.

To my eyes Turbo resembled Mopti, a colourful and lively town on the banks of the Niger river. Lost somewhere between Mali and Colombia, I was struck again by the extreme diversity that can be found in this country and by the unvarying kindness of its people.

As if representing them all, Betty, who runs a small restaurant in the main market of Turbo, welcomed me warmly. As she served me her version of fish stew and told stories of “her people,” I knew that I was in a place of mystery and good storytelling.

But I was also at the end of the Pan American Highway and my journey. Looking out over the waters of the Urabá, with its clay beaches and expanse of blue sky, I knew that I would come back to the Urabá and possibly, beyond. Urabá held the promise of exploration and the frontier that is the Chocó. 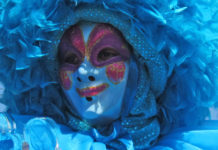 Barranquilla Carnival and the court of King Momo