Recently while traveling in Europe to see family, I got online at a Barcelona ‘Hotspot’ and after quickly browsing through my  spam folder to see which messages might have fallen through the digital crack, I came across a link sending me to YouTube to see the premier video of Colombia’s international brand campaign #TheAnswerisCOlombia.

Between bites of a Spanish ham sandwich, and what I can recall of the video, there are plenty of nicely framed scenes all shot through a Magenta filter, to give a warm glow to the country. From scuba diving in San Andrés to a tandem bike ride in a #ThisIsACartagenaSunset moment, the video immediately put me back in an Avianca seat, as the man who is reading the script with his very noticeable and flowing Colombian English accent, is also the man you gives you the in-flight safety briefing with his mellow take on: “in case of a loss in cabin pressure…”

The video was simply too much to digest. The sandwich delicious, however. So I began to envision life on the ground, once the visitor to this country walks up the metal ramp from the plane and into the glass terminal at El Dorado. In the video, it’s all #LoveActually, with hugs and kisses where the tow trucks generally park and the policemen whistle, not letting passengers get in and out of cars fast enough before racking up their daily quota of parking fines. After one of the actors touches her silver pendant setting off gules of light I am subjected to the epic #ThereExistsAPlace narration voiced over some sweeping scenes of Colombia’s tinted countryside. Of course, everyone is happy.

You are in Colombia wandering the colonial square of Villa de Leyva with a woolly mochila and (what we don’t see on camera) looking for an ATM that works because you urgently need cash to buy a razor and shave that hippie beard. Of course the actors couldn’t buy razors at the airport as the new El Dorado is all Duty Free, high end luxury goods, VIP lounges on all floors, and a food court with two fast food options: Italian pizza and a Burger King. Gone are the days of a soupy ajiaco and empanadas as airport “take away.”

Back to the video and Colombia’s colonial towns have tuned-in to hippie tourism. Wherever the actors go, they manage to change their hats and mingle in the parade. We are shown the beautiful flower march of Medellín and Barranquilla’s Carnival. Truth be told, if I didn’t know Colombia well, I might confuse parts of the video with a Panama City or San Juan, Puerto Rico.

One can appreciate the efforts of trying to brand a country when there is the reality that news can trump expensive promotion. Last month revealed disturbing numbers that for the fourth year running, Colombia had the highest number of internally displaced people on a list documented by the Norwegian Refugee Council’s Internal Displacement Monitoring Centre (IDMC). Then, news broke that an editor and investigator for news magazine Semana, Ricardo Calderón, narrowly escaped death after gunmen opened fire on his car.

Unfortunately, the attack against Calderón proves how difficult and dangerous it can be to exercise freedom of the press in this country. It seems Calderón had been investigating abuse by military officials in a jail near Bogotá.

I always find it strange to look at Colombia from a distance. Maybe the closeness to events clouds our vision, like the heavy use of filters in the Colombia promo. Sitting through the video, it seems languid and sanitized; everything too glossed over to #DriveHomeTheEmotion. A seemingly expensive campaign to sell a thirty-something country to more thirty-somethings who travel with hashtags. And here I am inching my way to fifty-something.

There is no ideal way of presenting the vastness of a country. I even got somewhat turned off with the recent screening of Anthony Bourdain’s “Parts Unknown” where he thrashes through the Guajira dunes, narrowly avoiding cacti and crushing some precious biodiversity. Then the world had to see how we slaughter goats in the desert and collect their blood in bright buckets. Bourdain’s savage Colombia and the pristine “Magic Realism” of @BrandColombia portray two very different places.

I seem to live in neither, but rather a country that queues up to pay its bills, sees how it can get enough cash together to pay district taxes, and is deeply concerned of overcrowding in its health system. I live in a place where every morning I am woken up by a man with a megaphone asking for scrap metal and used batteries. Where everyday I am asked for some spare change and an old sweater. Colombia could do well to tone down the man with the St.Tropez voice. We seem to be trying too hard to become what we are not. For #ThereExistsAPlace that works the mines, from emeralds to salt to coal. A place that works from dawn until dusk and isn’t afraid of a little grime. 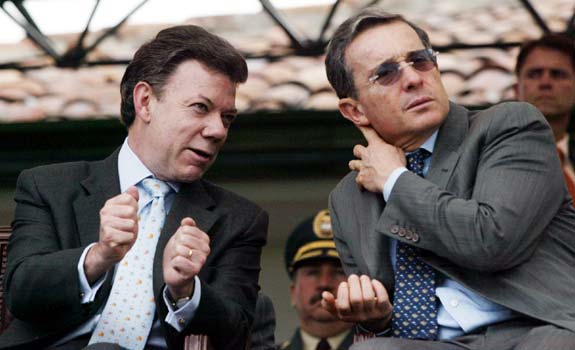