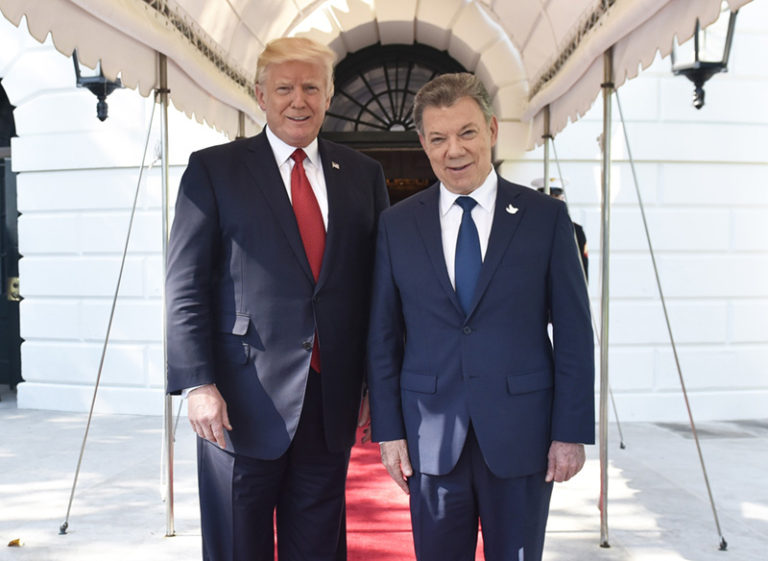 All smiles over avocados. That’s one conclusion to take away from the recent photo opportunity in the Oval Office of the White House after Colombia’s Juan Manuel Santos met with his U.S counterpart Donald Trump. But the plight of Tolima’s avocado cultivators were hardly top-of-mind, instead, another cash crop that needs no introduction took away the spotlight during “frank talks” and seems to have pushed the bilateral agenda back a quarter of a century to when the only discussion point, between these two historically allied nations, was drugs.

So, the peace process with FARC and planned hand-over of 7,000 AK- 47s by the end of June to the United Nations was reduced to a mere sound bite. The possible visa waiver program for Colombians was a non starter given the urgency of building a wall with Mexico, the tragic events in Caracas, and North Korea’s Kim Jong-Un going ballistic.

Santos clearly relishes a state visit to Washington, a loyal partner in fighting organized crime, but Trump’s remark to the Colombian President was hardly an endorsement of this country’s decade-long effort in stopping the flow of cocaine. “We have a problem with drugs, and you have a very big problem with drugs,” said Trump.

Trump’s appraisal of Colombia shows how we’ve come full circle. In other words, whatever this country does, or strives to achieve in reworking its image stateside, we’re branded publicly as a nation overrun by narcos right out of a Netflix episode. So much for our foreign policy “offensive”.

Santos returned from Washington with an agenda brimming with adjectives that made communications agencies glee: especially “awesome” that Nobel Peace Prize. Meanwhile though, 6,800 FARC guerrillas are waiting out another 60 days in 26 designated demobilization camps and wondering to themselves, what comes next? After the initial rush to sign the peace accord, the post-conflict began to stumble once jungle-tested guerrillas emerged from their hideouts.

While it seems FARC anxiously wants to move on with a political agenda and appear willing to reveal where the COP 1 billion in cash they accumulated from kidnapping, drug trafficking and extortion are buried in 400 or more “caletas”, hard-working Colombians aren’t reaping benefits by having been good citizens. Instead, they are taxed out of oblivion by a tax overhaul that was designed to inject much needed liquidity into a sluggish economy, which appears to have stumped growth to the extent that the GDP for the first quarter of 2017 was a mere 1%.

Add to this taxation hike, discontent over rising food prices, a host of corruption scandals in the energy and infrastructure sector, and the favorability of Santos as he reaches the end of his second-term presidency is a paltry 26%.

If a black cloud hangs over the Casa de Nariño, it’s not getting brighter across the Plaza de Bolívar for mayor Peñalosa, who is facing the ire of citizens – not over what he has failed to do (because, in fact, he is doing more than two previous mayors), but because of a leadership style that seems impersonal and detached. A year after shutting down one of the most notorious Drug districts in the city, “El Bronx”, an objective former mayor Gustavo Petro never executed, Peñalosa’s administration has been returning some measure of civility to areas of the capital prone to crime by putting more police on the streets, improving basic and essential services, such as better street lighting and CCTV cameras.

But the damocles sword of a recall vote is still swinging over Peñalosa, motivated by those who believe populism is good for democracy (look next door to Venezuela to see how that is working out). And vandalizing a TransMilenio station is hardly a political statement. The recall should fail miserably in the tribunals as it sets a dangerous precedent for those who lose an election by embroiling a future mayor in legal battles that distract from following through with a planned agenda. So,if you have to take a year out a four-year term grappling with lawyers, is taking charge of a city of nine million really worth it?

Bogotanos, jaded by the polarization of local politics, will inherit a better city by the time Peñalosa ends his term – at least he’s not ranting from the balcony of the Palacio Liévano every night. And Santos, grappling with perception issues of his own, did manage to remove FARC from the battlefield, and by doing so, reduced to an historical low the numbers of Colombians killed in combat.

But as far as international perceptions of Colombia go, we’re still a violent nation. Probably in Trump’s eyes, one that hasn’t progressed much since the days of Escobar. But those of us who live here, know better. And there’s another consolation– Colombia has avocados, and plenty of them. After the Washington meeting, our Hass avocados have been cleared for import to the United States . A small achievement maybe, but one that proves that not everyone who works the land in Colombia harvests coca.