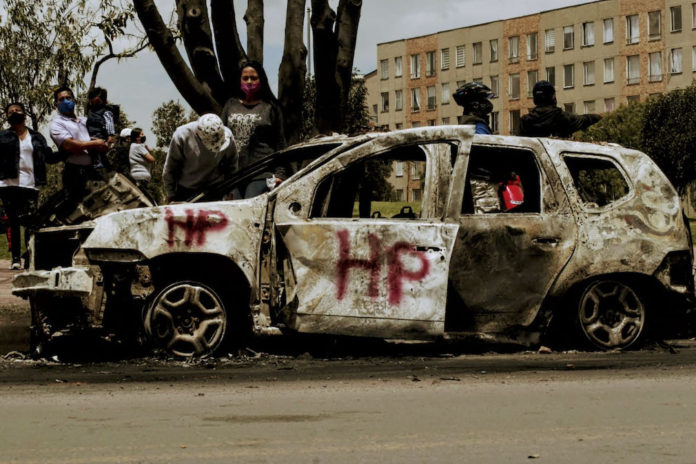 As protests continue on the streets of Colombian cities against the social and economic agenda of the government of President Iván Duque, some ending in violent confrontations with the state’s security forces, and which have resulted in 42 civilian deaths (according to the Office of the Ombudsman – Defensoría del Pueblo), an equally aggressive battle has been waging on social networks, with Twitter the lead protagonist.

While support for the National Strike (Paro Nacional) aims to discredit the national government on all matters of public policy, and at a moment in which the third wave of the pandemic has pushed the country’s hospital capacity to the brink of disaster, collective hysteria, intimidation, and fearmongering run rampant in cyberspace long after peaceful protests end. To get a grasp of debased social media one has to look no further than across the border to Venezuela and Maduro’s second-in-command Diosdado Cabello.

In Tweets that open with hashtags #DuqueNarcoParacoYAsesino and affirmations that “the fresh winds of the Bolivarian Revolution are blowing. We will win!,” the incitement for destabilization of a democratically-elected government is evident, and one fueling misinformation on social media. And headlines from media outlets such as The New York Times’ “Colombia Police respond to Protests with Bullets and Death Toll mounts,” and today’s “Colombia’s Police Force, Built for War, finds a new one,” don’t contribute to defusing an internal crisis that for many Colombians has already ended with the start of negotiations between the government and strike organizers.

Even The Guardian’s recent coverage that “Cali is the cockpit of chaos” presents to the outside world the image that the country’s third largest city is Mosul, engulfed in chaos and on the brink of civil war with “the presence of armed civilians attacking protestors.” The only line in the article that copy editors in London missed adding – while confirming 47 civilian deaths – the official number at the time was 26 (Fiscalía) – are “affluent Colombians hire snipers to murder coca farmers from narco compounds.” Systematic editorial bias to present the country as one intent on massacring civilians makes for a terrific – and terrifying – read. But far removed from the reality that the “Bolivarian winds” are blowing.

While Maduro’s verbal flatulence will not oust Duque before elections are held in 2022, many journalists on the ground are embedded in their bias of presenting Colombia as a terror state, and Colombian police as upholding a war machine (when all counter-insurgency operations are responsibility of the Army). In times like these, the Colombian insight of a John Simpson (BBC), David Lloyd Marcus (Dallas Morning News), Douglas Farrar (Washington Post) and Tom Quinn (TIME) is absent. From President Duque down, everyone in Colombia condemns and regrets the deaths of 42 fellow citizens, and while denouncement of excessive force by the police is justified, in the last 48 hours, 70 persons have been killed in Gaza. International condemnation of decades of genocidal acts committed in the Israeli – Palestinian conflict remain eerily tempered.

Colombia has been ill-versed in responding to the international community, news organizations and big tech on how to stem the avalanche of misinformation involving alleged police brutality, and social media that preys on vulnerable, quarantine-fatigued youth, uneducated minds, the disenfranchised, the malicious. One video of a mobile morgue collecting cadavers at night that went viral was filmed in Venezuela during one of many crackdowns by a regime that does murder pro-democracy supporters.

Context, however, doesn’t grab the world’s attention when Colombia’s Twitter feed frenzies with hashtags #SOSColombia #ColombiaAssesina #NosEstanMatando. And if during two weeks of largely peaceful protests (and several toppled conquistadores), the clarion call of #WeAreBeingMurdered is accurate, the death toll from the police’s new “war” would have surpassed the 9,000 Colombians, who since strike action began on April 28, lost their lives to coronavirus.

Wednesday’s Paro Nacional professes to champion every value at the core of a society (without police), and as several thousand demonstrators march, assemble and block roads on a day Minister of Health Fernando Ruíz confirmed ICUs are 100% occupied, the right to “Life, Freedom, Democracy!” belongs only to those supporting Paro Nacional. What the Strike Committee fails to embrace is the freedom of expression beyond their streets.

Hashtags that dare open a debate on Twitter against the strike are being spammed into oblivion with asinine videos of Korean K-Poppers. The blueprint of a K-Pop spam hijacks an issue relating to the Paro, beginning with support for the National Police. Within minutes of a #YoApoyoMiPolicia or #NoMasParo, legions of Korean performers and coiffured no-hit music wonders invade the conversation, the great majority posted by profiles created with fewer than 15 followers. K-Poppers continue to “trend” alongside “Colombia” on Twitter, and orchestrated spamming has infested the feeds of radio networks, TV news channels and journalists critical of Paro Nacional. Then again, when you’re reporting from the “Aleppo of the Andes”… truth is trival.

Editor’s note: On Wednesday a truck carrying oxygen and medicine for ICU patients was attacked and looted by vandals infiltrating the protests. For those strapped to life-saving equipment in a Bogotá hospital where the shipment was desperately needed, it’s time to remind the Strike Committee: #NosEstanMatando.