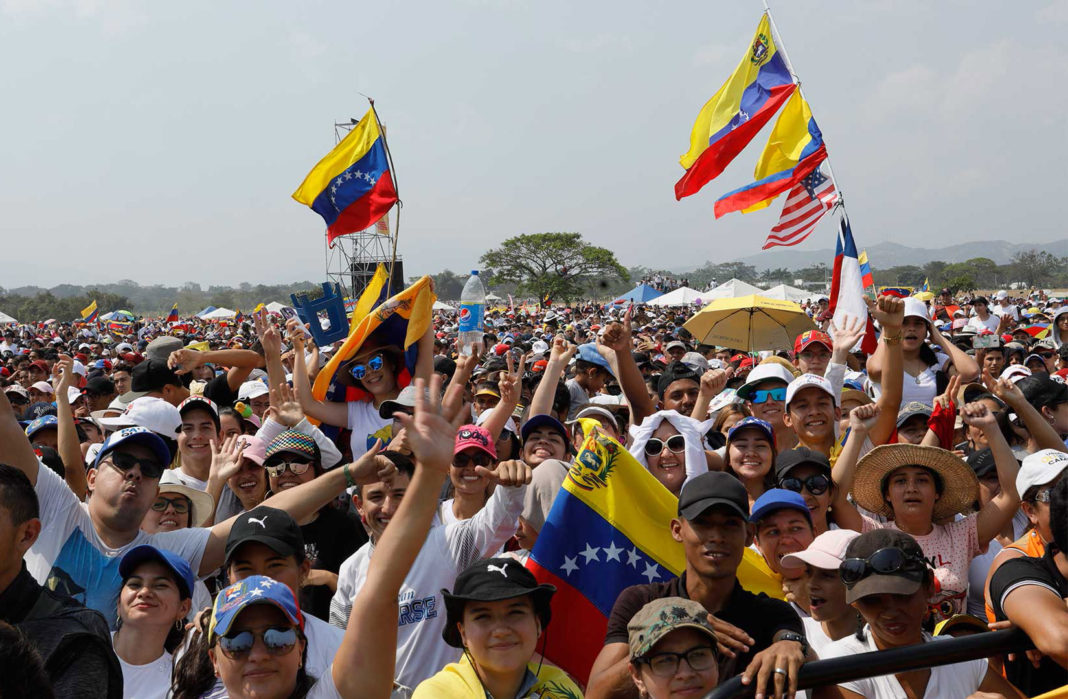 “Let’s hope the Venezuelan Army is on the right side of history,” remarked Colombian President Iván Duque upon arrival in the Colombian border city of Cúcuta and where Richard Branson’s Venezuela Aid Live concert is taking place. Accompanied by the President of Paraguay Marío Abdo Bénitez, Duque referred to the momentous situation taking place along the Colombia-Venezuela border, and emphasizing that “in a very short time we are going to have the same meeting on the other side of the border, but celebrating with the Venezuelan people their freedom and return to democracy.”

Paraguay’s Abdo Bénitez is one of several South American heads of state in Colombia ahead of the Lima Group’s summit on Monday in Bogotá. “We come to ratify our commitment of solidarity with the Venezuelan people, and those who will be remembered by history for their resistance to tyranny,” said Bénitez.

With an estimated 300,000 attending a concert that was organized in six days and counts with a slate of Latin American musicians, Venezuela Aid Live organizer Richard Branson, appeared on the stage and sent this message to an assembled crowd of Venezuelans and Colombians: “If we can take people to space, why is it so difficult to get our brothers out of poverty?” remarked the founder of Virgin Group. “This concert is about much needed humanitarian aid. It’s about making a difference in the lives of millions who have been suffering for too long,” added Branson.

The maverick entrepreneur was expected on Friday in the Mojave desert of California to witness the test flight of a Virgin Galactic rocket plane that soared to the edge of space, but instead spent the day in Cúcuta. The relief effort of humanitarian aid starts Saturday, February 23, when trucks filled with 700 tonnes of food and medicines head to a border that has been heavily barricaded by the Venezuelan army.

“Every day that goes by, the misery only gets worse, inflation is out of control, infrastructure has collapsed, the richest country in Latin America is now the poorest, this is unacceptable,” said Branson from a stage that backs the Tienditas bridge, and main overland crossing that has never been opened.

As millions tune-in to watch the musicians on stage and an audience decked with Venezuelan and Colombian flags, Duque welcomed that “the eyes of the world are on Cúcutá […] and start of an irreversible process of restoring democracy to Venezuela.”

“This is a historic weekend for Latin America because we are all united for the freedom of Venezuela,” stated Duque before the arrival of Chile’s President Sebastián Piñera in a military transport plane filled with donations from the Chilean people.

As the bands play on, Venezuela’s interim president Juan Guaidó is heading to the Tienditas bridge with a convoy of supporters to give the order with his presidential mandate of all entry of U.S aid, Saturday. The move by a leader who has the backing of the Lima Group of nations, U.S, Canada, United Kingdom, European Union, among others is seen by Russia as a “provocation” intended to topple Nicolas Maduro.

During a press conference from the Kremlin, Russian Foreign Ministry spokeswoman Maria Zakharova told reporters that Saturday is a critical date for the Maduro government and the U.S-aid convoy could end in violence.

Bogotá protests result in 340 injured, one student in critical condition