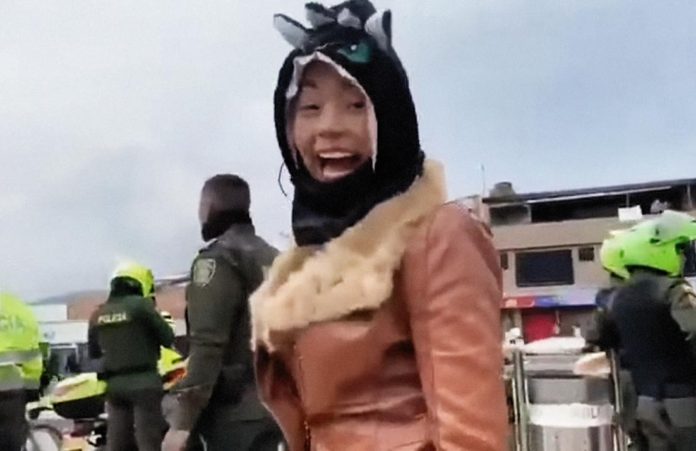 Of the many grotesque images, fake news and continuous t.v coverage Colombians were subject to as rioting and senseless acts of vandalism besieged Bogotá on Thursday, one cellphone video sparked outrage across the nation, and that depicts a social media “influencer” smashing a TransMilenio bus station.

Known by her online alias as “Epa Colombia,” 23-year old Daneidy Barrera joined the rampage of vandals sweeping through the capital armed with her cellphone and hammer to destroy public property. Gloating into her mobile screen, Barrera is seen taking aim with a hammer at TransMilenio ticket wickets, a pay booth and glass windows before sharing her 40 second “how to destroy” post.

By enflaming social media with her in-situ “performance,” and explaining in Spanish – but mostly in gibberish – why she so energetically trashed a station,  the National Police placed Barrera on their radar, and she is now a fugitive from Colombian justice. With authorities tracking her physical and digital trails, on Monday, the country’s top law enforcement entity, the Attorney General’s Office (Fiscalía) issued an arrest warrant against the Youtuber-turned-vandal. However…

Barrera surfaced briefly on social media greeting her 900K audience and confirming the obvious: “At the moment I am in hiding because I am very afraid.” And without making a dent in her maniacal alter ego, Epa Colombia, continues: “I know how much you love me, and are super fans of mine, as I am a public figure … I am going to pay, I swear that I will pay.”

Barrera’s damages, however, could cost a lot more than the “likes” she was bargained for according to the Fiscalía: A fine of $31 million pesos for destruction to public property and up to 11 years in prison for “conspiracy to commit acts of terrorism.”

In a surreal turn of events – almost as surreal as Barrera’s video – a judge overruled on Monday the Fiscalía’s arrest order against the hooded influencer as she “presented no harm to society.” According to Control and Guarantee judge Catalina Res, Barrera has shown remorse and, for the time being, can walk free. But for many Colombians, this influencer will remain a fugutive in the digital world.

Colombia receives $5 billion from U.S to finance projects in coca-growing...