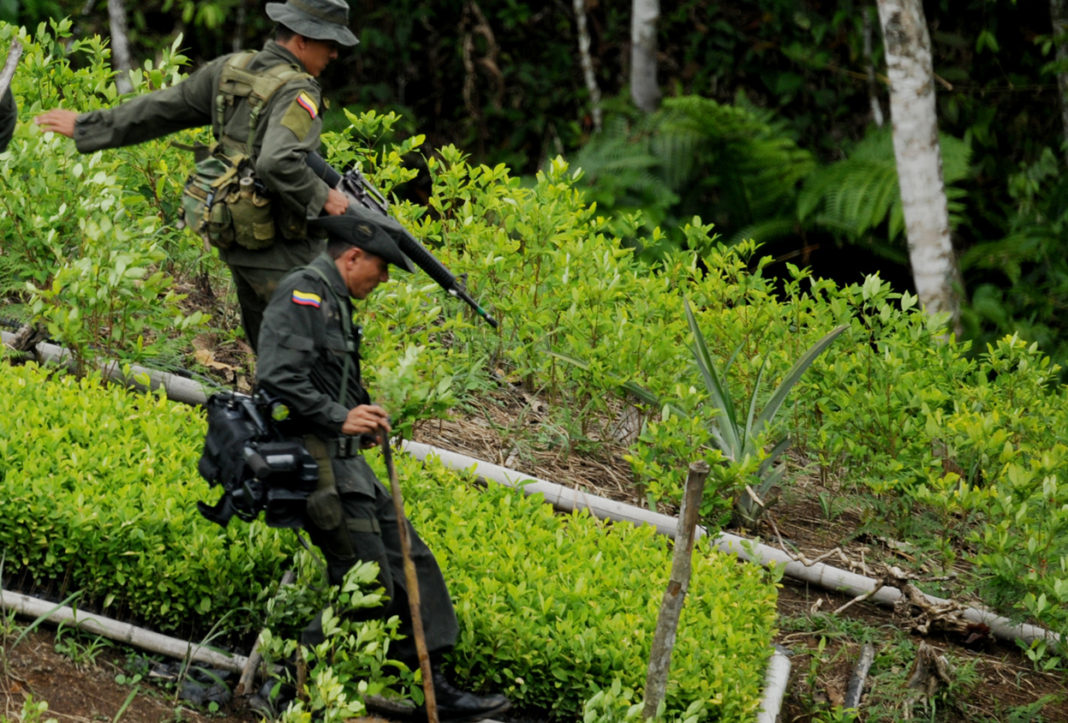 U.S. drug officials will meet in Colombia next week to “engage in serious discussions with the Government of Colombia” about the sharp increase in coca cultivation and cocaine production in the country in recent years, U.S. drug officials said in a press briefing on Thursday.

The announcement of the meeting, though officials did not offer more details, comes as Colombia has seen a spike in illicit coca cultivation, with increases of 39 percent in 2015 and 43 percent in 2014, the latest figures available from the United Nations Office on Drugs and Crime. The meeting could also offer the first glimpse of U.S. drug policy in Colombia under U.S. President Donald J. Trump, who has repeatedly vowed to be “ruthless” in the fight against drug trafficking.

“We are working on the problem. It is a serious problem,” said William R. Brownfield, assistant secretary of the U.S. Bureau of International Narcotics and Law Enforcement Affairs, during Thursday’s press briefing. “Both governments recognize this fact. Both governments realize that it is neither in the interest of Colombia, nor in the United States of America, nor, frankly, any country in the Western Hemisphere or the world, that there be more than a doubling of cocaine production coming from Colombia over the last four—three or four years.”

Since Trump was elected in November, there has been much speculation on how the new administration would approach the drug war and to what extent it would back the implementation of the peace accord with the Revolutionary Armed Forces of Colombia (FARC), a rebel group that the U.S. has classified as a terrorist organization. But given Trump’s mixed messages on foreign aid—at times suggesting it is a waste of money—and his “America First” platform, it is still unclear if the administration will favor anti-narcotics operations in the country at the expense of social and peace building initiatives funded by the U.S. State Department.

In January, U.S. Secretary of State Rex Tillerson said he wanted to “review the details of Colombia’s recent peace agreement, and determine the extent to which the United States should continue to support it,” according to Latin America Goes Global. Tillerson has also called “Plan Colombia,” a multi-billion-dollar U.S. counternarcotics military aid program, a “foreign policy success.”

But in February, Trump reportedly expressed his support for Paz Colombia, a proposed Obama-era initiative to allocate US $450 billion for peace efforts in Colombia, in a phone call with President Juan Manuel Santos. The day before the call, U.S. Vice President Mike Pence “congratulated President Santos for the initial steps in implementing the Colombian peace accord,” according to communiqué from the White House.

“We have to start winning wars again… We never win.  And we don’t fight to win,” Trump said on Monday during a meeting with the National Governors Association.

Although coca cultivation in Colombia has increased since 2012, the eradication of the crop has steadily declined in each of the past nine years, plummeting from nearly 230,000 hectares in 2008 to around 17,600 in 2016, according to the Colombian Ministry of Defense.

In January, the Colombian government unveiled an ambitious goal to eradicate 100,000 hectares of illicit coca crops in 2017 despite missing its goal of eradicating 20,000 hectares in 2016.

Colombia is the world’s leading producer of cocaine, according to the most recent statistics from the United Nations Office on Drugs and Crime. Although Peru surpassed Colombia in 2013 to become the world’s top producer of the drug, but by 2015, Colombia was growing more illicit coca than Peru and third-place Bolivia combined.

Around 90 percent of cocaine seized in the U.S. came from Colombia, according to the latest figures from the U.S. Drug Enforcement Administration. Brownfield, who served as the U.S Ambassador to Colombia from 2007 to 2010, said he estimates this country produces “2 percent to 4 percent” of all heroin consumed in the United States.