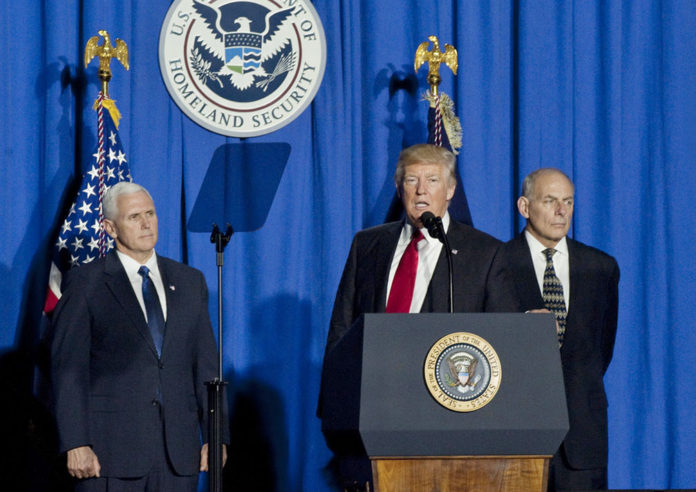 U.S. President Donald J. Trump’s controversial executive orders to build a wall along the U.S.-Mexico border and temporarily bar refugees and citizens from seven predominantly Muslim countries have been met with enthusiasm some 5,500 miles to the south—in Argentina.

Facing an uptick in violent crime associated with the drug trade during an election year, Argentine President Mauricio Macri issued a decree in January that would not only boost security measures along its borders, but also suggests that foreigners are largely the culprit for the rise in crime. Days later, conservative Congressman Alfredo Olmedo called for a 480-mile-long border wall with Bolivia and to deport foreign criminals, specifically naming Colombians.

“The Bolivian people are very hardworking and I respect them a lot,” Olmedo said. “But criminals must stay on the other side of the border. And if a criminal enters from Colombia, from Paraguay, or from wherever, they will have to return home. We will not pay to imprison them.”

Although Macri’s administration has attempted to distance itself from Trump’s travel ban by expressing its willingness to take in Syrian refugees, the branding of foreigners—particularly Colombians, Peruvians, Bolivians, and Paraguayans—as criminals has raised concerns that Trump’s divisive immigration policies could embolden the most conservative elements of Latin America who are using fear to stoke long-standing prejudices.

Olmedo’s declarations do not appear, however, to have the support of the Macri administration, which has expressed concerns over Trump’s “unilateral initiative” to build a border wall with Mexico.

On January 25, Trump signed an executive order to start building a wall along the 1,954-foot-long border. Two days later, Trump issued an executive order that barred citizens of Iran, Iraq, Libya, Somalia, Sudan, Syria, and Yemen from entering the U.S. for 90 days and all refugees for 120 days, except for Syrian refugees, who are barred indefinitely.

The move was applauded among Trump’s supports, many whom see the U.S. as their own, despite the fact that Europeans seized the land from indigenous groups who long inhabited the present-day U.S. Additionally, much of Trump’s campaign rhetoric stoked fears and prejudices that refugees fleeing war in the Middle East could be members of clandestine terrorist cells that are plotting attacks in the U.S.

Trump has said the ban will allow his administration to put “extreme vetting” in place in the targeted countries to weed out alleged would-be terrorists. Trump’s opponents say the ban discriminates against Muslims and that the U.S. already sufficiently vets refugees.

On February 3, a federal judge issued a temporary restraining order (TRO) to prevent the enforcement of the ban while the court considers a legal challenge from Washington state.

The Trump administration then sought to block the 14-day TRO, arguing that the ban is necessary because it prevents terrorists from entering the U.S.

On Thursday, the U.S. Court of Appeals of the 9th Circuit denied to lift the TRO, ruling that the administration failed to make a case that the TRO posed a national security threat. The court, however, did not rule on the legal merits of the ban. The ruling said the administration was unable to provide evidence that terrorist attacks have been carried out in the U.S. by people from any of the banned nations.

Trump told reporters on board Air Force One on Friday that he was considering “a brand new order” that could be issued as early as Monday or Tuesday. But White House chief of staff Reince Priebus said the administration has not ruled out escalating the legal dispute.

“Every single court option is on the table, including an appeal of the Ninth Circuit decision on the TRO to the Supreme Court, including fighting out this case on the merits,” Priebus said.

It is unclear as of yet how the travel ban, which is due to expire in April, or Argentina’s immigration decree would affect Colombians, if at all.

However, Colombians with dual citizenship in one of the countries targeted in Trump’s ban could face problems entering the U.S. Immigration raids carried out across the U.S. in recent days could also affect Colombians who are in the U.S. illegally. The raids have led to the arrest of hundreds of immigrants.

Nevertheless, uneasiness has worried Colombians who fear Trump’s crackdown on immigration could affect their ability to visit family, travel, or study in the U.S. In the wake of Trump’s travel ban, rumors were widely circulated on social media that suggested that Colombia could be added to Trump’s ban presumably because the U.S. State Department classifies the Revolutionary Armed Forces of Colombia (FARC) and the National Liberation Army (ELN) as terrorist organizations. But Homeland Security director John Kelly dismissed rumors that the Trump administration would add more countries to the travel ban.

“I read something where there were an additional 12 countries being considered to be put on the list. That’s not true,” Kelly told the House Homeland Security Committee on Tuesday. “Right now, we’re contemplating no other countries because…we’re satisfied that most other countries…can provide the information we’re looking for to start making recommendation to send people here.”

On February 1, Maria Fernanda Gardeazábal, an 18-year-old Colombian, was denied entry to the U.S. on a tourist visa after she allegedly told immigration officials in Houston that she was planning to take English courses during her visit, which would require a student visa.

“They isolated her, they put her in a room for 10 or 12 hours, they took away her cell phone, and they wouldn’t let her talk to me for even two minutes,” Ricardo said.

The Trump administration, for its part, has repeatedly expressed its desire to maintain close diplomatic ties with Colombia and respect the “special relationship.”

On Friday, U.S. Vice President Mike Pence “congratulated President (Juan Manuel) Santos for the initial steps in implementing the Colombian peace accord,” according to communiqué from the White House. And on Saturday, Santos spoke with Trump on the phone for a 25-minute conversation in which Trump invited Santos to the White House and reportedly backed Paz Colombia, a proposed Obama-era initiative to allocate USD $450 billion for peace efforts in Colombia.

But any measures to increase U.S. visa requirements could affect Colombian companies who regularly send employees to do business in the U.S. and Colombian airlines such as Avianca and Viva Colombia, which have direct flights from Colombia to major U.S. hubs.

It appears international travelers are wary of Trump’s immigration policies. From December 29 to February 1, internet searches for international flights bound to the U.S. dropped by 17 percent, according to travel research website Hopper.com. The U.S. is the top international tourist destination for Colombians, with over 1.2 million Colombians visiting the country as tourists in 2016, according to Colombia’s migration service.