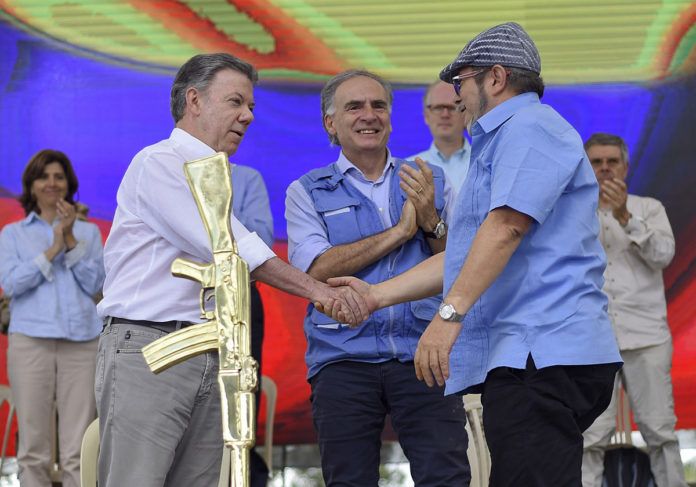 In a town considered a bastion of the Revolutionary Armed Forces of Colombia (FARC) guerrilla, Colombian President Juan Manuel Santos attended a ceremony, Tuesday, in Mesetas (Meta) to preside over the end of FARC as a fighting force.

Accompanied on stage by FARC’s top brass and maximum commander Rodrigo Londoño, known by his nom du guerre “Timochenko,” President Santos recited words by French novelist Victor Hugo written for the 1948 International Peace Congress in Paris. “One day will come when there will be no more wars. One day will come when men stop arming against each other.”

The hour long ceremony in one of FARC’s 26 transitional zones marks the end of one of the world’s oldest Marxist insurgencies, although “Timochenko” said his organization would continue in the struggle to defend the agreements of the final peace accord, signed last November in the Colombian capital. “We continue to exist. We exist as a legal movement,” said Londoño.

On Sunday, FARC handed over the last of their weapons to United Nations monitors, completing a three month demobilization process that UN Special Envoy and head of the Colombia mission Jean Arnault claimed was “honored by both sides.”

“This is the best news for Colombia in the last 50 years,” said Santos to an audience of former combatants and representatives of Colombia’s left-wing political parties.

During the disarmament process 7,132 sophisticated weapons were registered and sealed inside special UN containers. The UN’s Arnault stated the handover collected more armaments “than those used in other conflicts around the world.” The weapons will be melted into iron for three sculptures to commemorate victims.

At the end of the ceremony, Londoño handed Santos a metal replica of an AK-47 turned shovel, to mark the end of his group’s half-century long war with the Colombian state. “Today we are one people, one nation, that can live in peace,” concluded Santos.