Attending the World Economic Forum in Davos, Switzerland, President Iván Duque referred to the events of Tuesday’s National Strike – Paro Nacional – when hordes of masked vandals took to the streets of Bogotá with the sole intent of attacking members of the police, as well as public and private property. “When we see hooded individuals who vilely attack our security force, we have to be even more forceful,” said President Duque, and “when we talk about decisiveness, we have to proceed to capture and clarify who are the people behind these organizations.”

The President added, that the responsibility to prevent acts of vandalism in the future must be shared among the mayoralties. “These acts must be punished exemplarily. This is the path to defend the Constitution and the law,” he said. President Duque also reiterated that peaceful protest is a right of all citizens, but vandalism, attacks on mobility, are also an “attack on the right to health and work of all Colombians.”

President Duque’s words echo those of Bogotá Mayor Claudia López, who on Tuesday evening, addressed the media claiming the “vandals are a minority” in the overwhelmingly large and peaceful protests. López also justified sending out the anti-riot squad – Esmad – with stripped-down equipment to face protestors armed with petrol bombs, sticks and improvised explosives. “We cannot start with violent confrontation, with lethal weapons, which end up taking lives. That cannot be the logic, we have to recognize that people who mobilize have legitimate claims,” she said. López confirmed that during the day of mass protests only eight persons were injured, compared to 100 on November 21, 2019, first day of the Paro Nacional.

Despite continuous coverage on television showing mobs of masked vandals smashing windows of TransMilenio stations, setting fire to tires on streets, including scenes in Bogotá’s historic center of encapuchados destroying sidewalks for bricks to hurl at police, López confirmed that 3 vandals had been arrested and face prosecution. “I call on the Attorney General’s Office that these hooded, violent, vandals, not be freed due to lack of evidence. We are available to authorities to deliver all the necessary evidence,” she said.

In a rebuke of President Duque’s National Dialogue, which had conducted 20 working sessions with student groups, trade unionists and human rights organizations to create an agenda, that in the words of the President, will “strengthen us as a nation,” Claudia López reaffirmed that as long as protests continue “we will continue to protect life, facilitate mobility and ask the National Government not to talk, but to solve.” 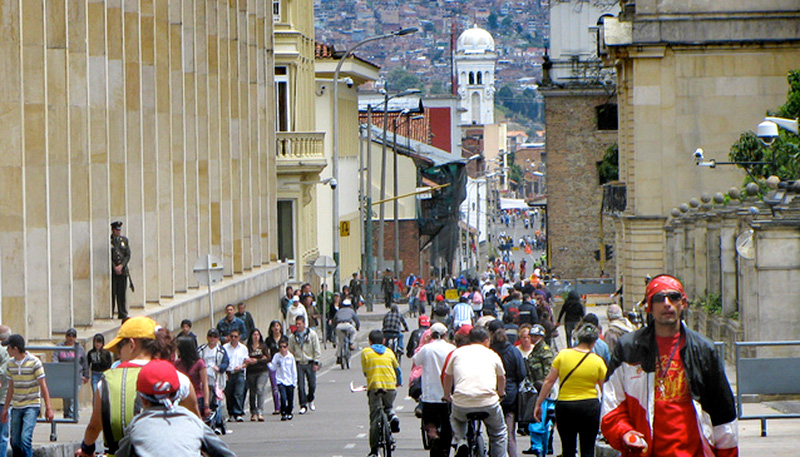 A day without cars