For the opposition, 107 seats constitutes a more than three-fifths majority, which confers greater power than a simple majority. That’s a step up from early Monday morning when the first results were announced, giving the coalition 99 seats.

If all three indigenous representatives join the opposition coalition and they pick up the two disputed seats, it would provide a two-thirds majority, otherwise known as a supermajority.

A National Assembly supermajority would have the power to substantially reshape some of Venezuela’s most powerful institutions should it choose to do so.

With two-thirds of the Assembly, opposition representatives could set or remove price controls, appoint or remove high court justices and call constitutional assemblies, among other powers.

In a historic vote, Venezuelans picked opposition candidates from the Democratic Unity Roundtable (MUD) coalition to fill at least 99 of the 167 seats in the National Assembly, leaving the Socialist Party with at least 46. Vote counts had still not been finalized for the remaining seats by early Monday morning.

“To all of Venezuela, many thanks and congratulations for this great day of democracy,” said Tibisay Lucena, president of Venezuela’s National Election Commission (CNE), before announcing the vote tally after midnight Monday morning in Caracas.

International political analysts had called for a landslide based on public opinion polling from the past few weeks. Final results seemed to confirm that prediction.

“A new majority has spoken, but we won’t arrive at the Assembly to step on the minority,” announced Jesús Torrealba, executive secretary of the MUD before a celebratory crowd after the results were announced. “We are all part of this project, because it is all one project called Venezuela — a Venezuela united.”

In the speech, Torrealba also said his party would work to free political prisoners, the most prominent of whom is Leopoldo López, a former leader of the opposition Popular Will (VP) party who has been in prison since September on charges of public incitement.

The Socialist Party has held control over the country’s politics since 1998, when the late former President Hugo Chávez won the presidential election.

But Chavista rule started to meet substantial resistance when Venezuela’s economy took a sharp downturn shortly after Chavez’s death in 2013 and the beginning of President Nicolás Maduro’s administration later that year.

*Counts are as of 1 a.m. Caracas time

Since then, the global price of oil has tanked, plummeting from more than $100 per barrel at the start of 2014 to roughly $40 per barrel today.

That drop devastated Venezuela’s economy, leading to long lines for food, medicine and basic household goods. The country’s inflation rate hit 68 percent last year, according to the Venezuelan Central Bank, making it the highest in the world. It could reach the triple digits by the end of this year.

“The constitution has triumphed and democracy,” he said in the speech, which ran nearly 40 minutes. “We accept the results exactly as they have been given to us.”

But Maduro also spoke extensively about what he claimed was negative outside influence on voters’ decisions. He blamed “economic warfare” for swaying public opinion and called out foreign interference and media bias as other factors.

A Pew Research Center poll released Thursday showed that Venezuelans had an overwhelmingly negative view of their country’s status and the people in charge of it.

Only 14 percent of Venezuelans said they were satisfied with the country’s direction. Thirty percent said the national government is having a good influence and 29 percent approved of President Maduro.

Opinion was split starkly along ideological lines, however.

Venezuela’s refusal to allow all but minimal international oversight raised concerns that the Sunday election might not be completely free.

But voting seemed to take place in relative calm over the course of the day, according to Venezuela’s Minister of Defense.

Some analysts worried that might not be the case. President Maduro has spoken aggressively about the importance of his party prevailing. In June he said that there would be “massacre and death” if his party’s so-called Bolivarian revolution were to fail.

That tone was notably more subdued on Sunday, however. Maduro reportedly resigned himself to a potential opposition victory and said that “peace and democracy must reign” in importance above any particular political movement, according to The Washington Post.

The law allows polling places to stay open until all voters already in line have had a chance to cast their ballots, but some experts questioned whether it could be extended nationwide. President Maduro, for his part, reassured voters on Twitter that they would still be heard and congratulated Venezuelans for a peaceful turnout. Jorge Quiroga, former president of Bolivia and one of a handful of former Latin American heads of state present to monitor the elections in Venezuela, had his credentials revoked after he denounced the extension of official polling hours. Voters were still in line at some polling places well after 8 p.m. Caracas time. But shortly after 9 p.m., opposition candidates began celebrating their victory on social media hours before official results were announced after midnight. The next presidential election won’t be held until 2018, but Sunday’s results will likely spell trouble for President Maduro. The at least 99 seats won by opposition party members allow them to appoint a new leadership of the National Assembly, call for a national referendum and approve constitutional reforms. If they pick up another two or more seats, they could approve emergency powers for the president and pass censure motions against government ministers.  And if the opposition manages to clinch 112 or more seats and obtain a supermajority, representatives would be able to pass laws without presidential approval and appoint or remove judges from the Constitutional Tribunal, among other powers. 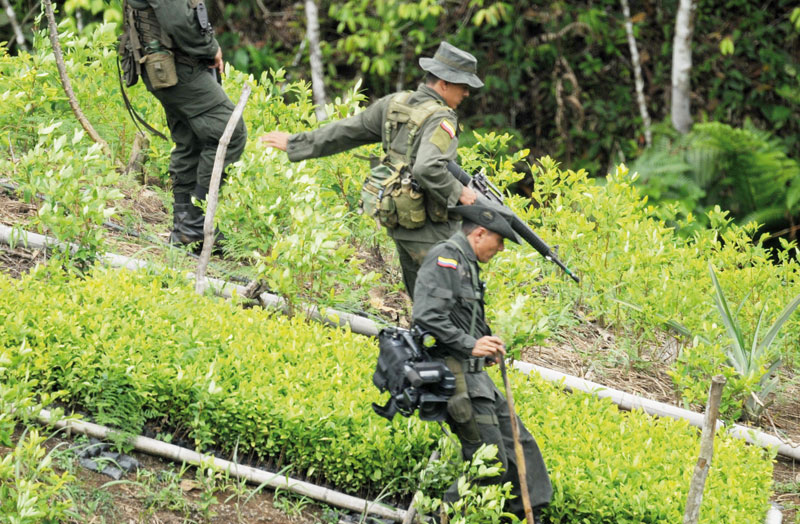 Drugs on the table