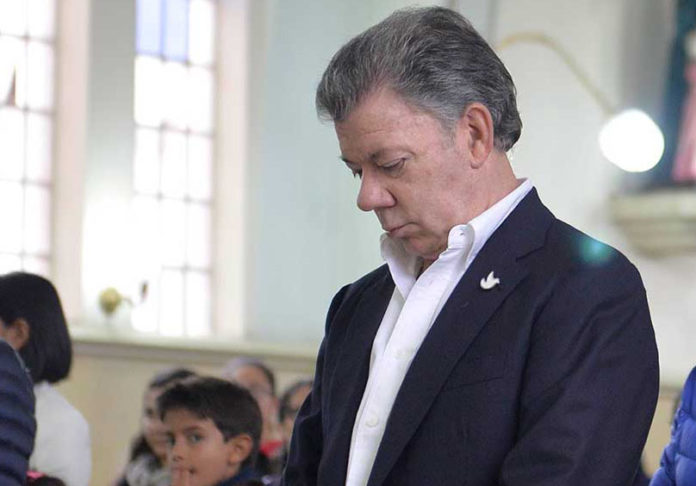 When the polls closed at 4 pm across Colombia, more than 34.8 million were eligible to cast their vote in the historic peace plebiscite. With a “Yes” or “No” on the ballot, voter turnout was steady throughout the day despite a rainy start in most of the country. The Colombian capital had 12,078 booths set up to receive voters from 8 am onwards.

Colombians residing in 56 countries also cast their votes to accept or reject the Final Accord signed on September 26 between the Colombian government and the Revolutionary Armed Forces of Colombia (FARC) guerrilla group.

In order for “Yes” to win and ratify the final accord with FARC, more than 4,536,993 votes were needed to be cast nationwide. When the Colombia’s Constitutional Court approved the peace plebiscite on July 18, it lowered the voting threshold to this mark, which represents 13% of national registered voters.

The peace plebiscite aimed to break voter apathy regarding the peace process with FARC that lasted almost four years in Havana, Cuba. But an hour after the polls closed, some 13 million Colombians had cast their votes, showing important participation in the democratic process.

After more than a half century of conflict, the plebiscite summed up in one question the original six points of an agenda that both sides set out to address beginning in August 2012. On Monday, September 26, President Juan Manuel Santos signed with FARC’s “Timochenko” the 57-year-old revolutionary Rodrigo Londoño Echeverri, the final accord during a televised ceremony in Cartagena attended by 15 presidents and U.N Secretary General Ban Ki-moon.

Colombia’s security forces confirmed that there were no reports of violence during the voting day Sunday.

The upset has sent shock waves across the country.

Upon receiving the news that “No” clinched victory, the FARC tweeted “We don’t have a plan B.” During the peace signing ceremony in Cartagena, “Timochenko” assured Colombians that their objective is to form a political party and not return to war. On this historic Sunday, “Timochenko” released the following tweet: “We are convinced that all Colombians can overcome their difficulties and smile with hope for the future.”

The question that was put to Colombians on the ballot — “Do you support the Final Accord for the End of the Conflict and the Construction of a Stable and Lasting Peace?” — faced opposition by those who claimed that “supporting” peace does not equate to “approving” a peace that hands out impunity to FARC combatants.

With the large voter turn out Sunday across Colombia and a clear rejection of the peace agreement with the oldest guerrilla insurgency in the world, the political future of the 65-year-old President Santos appears to be uncertain. Upon receiving news of the “No” victory,  Santos called an emergency meeting at the presidential palace Casa de Nariño with all his ministers and chief peace negotiators. President Santos has staked his presidency on a “Yes” victory and mandate for peace.

All polls leading to voting day suggested “Yes” would have a decisive victory over “No.”

The head of state addressed the nation at 7:00 pm stating “Tomorrow I will call on all the political forces — particularly those that demonstrated “No” today — to hear them and encourage dialogue and determine the way forward.”

President Santos also confirmed that the chief peace negotiator, Humberto De la Calle, and High Commissioner for Peace Sergio Jaramillo, will head to Cuba to brief the FARC negotiators on the outcome of the political debate.

After President Santos’ four-minute speech, the FARC’s “Timochenko” sent out an official statement: “The FARC maintain their will of peace and reiterate their disposition to use only the word as a weapon to build the future. To all Colombians who dream of peace, you can count on us. Peace will triumph”

The war with FARC has claimed 260,000 lives during more than a half century of conflict. The deadline for the demobilization of the 13,000-strong guerrilla now appears uncertain.

With the peace signing between their top commander “Timochenko” and President Santos last month, FARC fighters were beginning to move to 28 U.N.-monitored “verification zones” in order to begin the handover of weapons and process of reintegrating back into society. The razor-thin margin on Sunday reflects deep divisions among Colombians regarding a peace process that was four years in the making.

The “No” victory at the polls Sunday, October 2, means the 297-page Final Accord with FARC cannot be implemented.