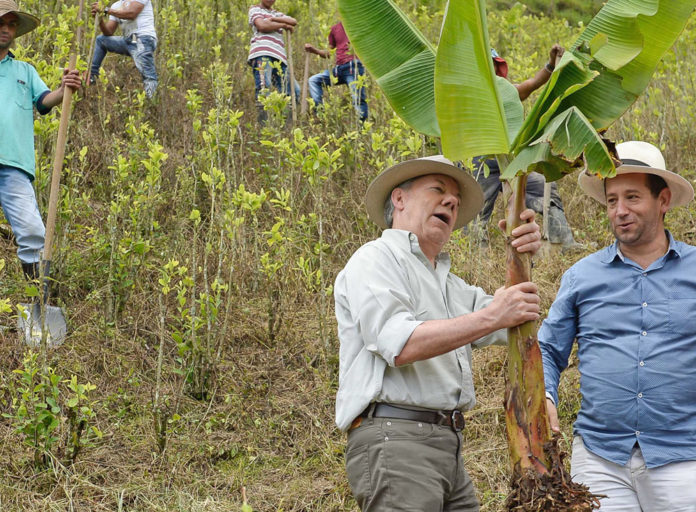 On Thursday, U.S. President Donald Trump will meet his Colombian counterpart, Juan Manuel Santos, at the White House to discuss ways to reinforce the strong ties that exist between the two nations.

In a statement released by the White House, the meeting will focus on the “peace accord implementation, engagement on shared security objectives, such as counternarcotic and transnational organized crime, and countering democratic backsliding in Venezuela.”

Thursday’s meeting marks the first official visit to Washington for Santos under a Trump presidency, and at an historic moment for Colombia as some 6,800 guerrillas of the Revolutionary Armed Forces of Colombia (FARC) have begun handing over their weapons for destruction, in a process monitored by the Office of the Secretary General of the United Nations.

While FARC combatants remain concentrated in 26 verification zones, the first 12 combatants were reintegrated last week into society during a ceremony at the United Nations. Yet, despite facing delays to meet an end-of-May deadline for the handing over of an estimated 7,000 weapons, lawmakers in Bogotá and Washington are growing increasingly concerned that ever since FARC have relinquished territorial control in coca growing areas of the country, a rush by criminal organizations to fill the power vacuum is underway.

On Tuesday, Colombia’s Defense Minister, Luis Carlos Villegas, denied allegations that criminal organizations are “co-opting” zones formerly controlled by FARC. The Minister also released statistics in which 15,000 hectares have been manually eradicated so far this year, the same as in all of 2016.

In the latest report released by the State Department’s Bureau of International Narcotics and Law Enforcement Affairs, Colombia has witnessed a surge in coca cultivation, attributed to “FARC elements […] urging coca growers to plant more coca, purportedly motivated by the belief that Colombian government post-peace accord investment and subsidies will focus on regions with the greatest quantities of coca.”

The report claims that Colombia’s drug control strategy involves forced coca eradication, interdiction, rural policing, alternative development, crop substitution and protection of its national parks. On Monday, Santos visited a coca crop substitution project in the rural township of Briceño, Antioquia, that directly benefits 24 families and has cleared the hills of 44 landmines as part of nationwide demining initiatives agreed upon in the Final Accord between FARC and the government.

Despite suspending aerial fumigation of coca on October 1, 2015, over public health and environmental concerns, Colombia, has manually eradicated 12,600 hectares of coca in 2015, surpassing its goal of 11,000 hectares in 2014. In a press briefing at the Ministry of Defense in Bogotá on Tuesday, Villegas stated that the objective for 2017 is to manually eradicate 50,000 hectares.

After 18 years of Plan Colombia and U.S $10 billion in aid funneled to combating the so-called War on Drugs, Colombia’s coca crops cover an estimated 188,000 hectares (460,000 acres), equivalent, according to Minister Villegas, of an annual production of 700 tonnes of cocaine.

While coca cultivation proliferates, Colombia’s security forces have targeted in recent weeks the Clan del Golfo cartel, resulting in the arrest Tuesday of Jorge Iván Arboleda, alias “Hernán”, a former paramilitary and senior member of the crime syndicate. The Clan del Golfo is responsible for smuggling cocaine to Europe and the United States from Colombia’s Pacific Coast and Uraba Gulf.

From the war on drugs agenda to strengthening the trade relationship between the United States and Colombia, Trump and Santos in their 60-minutes together will also discuss the regional impact of the Venezuelan crisis.

Santos will meet with U.S Vice President Mike Pence and members of the U.S Congress, where he will thank the representatives for approving a ‘Paz Colombia’ budget of US$ 450 million. This approval “is a very positive sign of the way the new [Trump] administration and the United States sees peace and post-conflict,” said Santos.