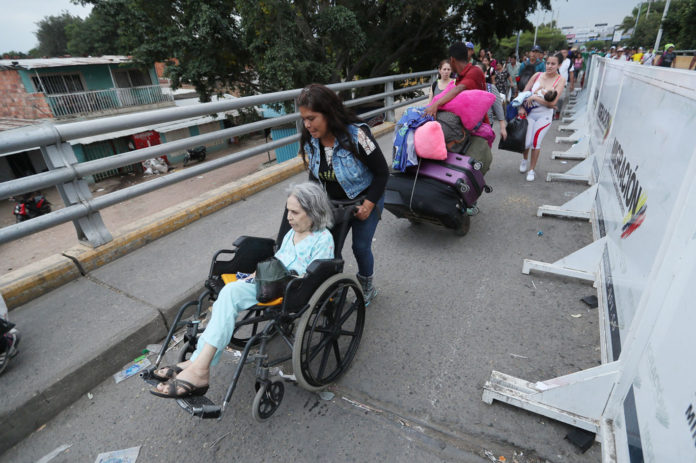 The figures as of January 31, 2019, include Colombia’s 32 departments with the least concentrated in the departments of the Amazon basin (Caquetá, Vichada and Guaviare), as well as Caribbean archipelago of San Andrés.

As hundreds of migrants stream across the narrow Simón Bolívar bridge every day that serves as a lifeline for migrants in search of essential foods and medicines, the Colombian government has kept the border with Venezuela open to welcome some 3 million fleeing the regime of Nicolás Maduro and economic collapse of their country, often walking great distances to reach neighbouring countries, Peru, Ecuador and Brazil.

On the Venezuelan side of Las Tiendas International bridge which was never opened to facilitate the flow of cars and trucks between the two nations, black-clad members of the National Guard barricaded the three-lane highway with discarded shipping containers and fuel trucks  to prevent humanitarian aid from entering, and act repudiated by the international community and Venezuela’s interim President Juan Guaidó. 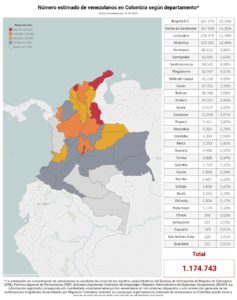 The installation last week of a unified command post in Cúcuta (the main Colombian city on the border crossing point with Venezuela) to coordinate aid shipments destined for tens of thousands was quickly ridiculed by Maduro as a pretext by Colombia and United States to launch a military offensive. Referred to by Maduro as a “cheap show” that turns Venezuelans “into beggars,” the Lima Group gathered in Ottawa, Canada, called on security forces along the border to not prevent the transit of tons of humanitarian aid waiting to be delivered to those in need. But calls from governments that have recognized Juan Guaidó as the legitimate Venezuelan President are being rebuked by Maduro, his inner circle and loyal military commanders. But on Tuesday, during huge anti-government protests in the streets of Caracas, Guaidó defied the regime. “Allow in the humanitarian aid. That’s an order!” he said.

In a decisive move to re-establish diplomatic relations with Colombia, Guaidó named a former oil executive and geologist Humberto Calderón Berti Ambassador to Bogotá. “Of all the countries from which we have received more support in the migration crisis, it has been Colombia,” remarked Calderón Berti during the appointment ceremony at the San Carlos Palace. “Venezuela is a country that has deep gratitude to Colombia as we have had historical and cultural ties, very strong family affinities along the border, and feel tremendously committed to this country,” said Calderón.

Francisco Santos, former Colombian vice-president and current Ambassador to the United States dismissed allegations that his country is on a war footing with Venezuela and that one of the reasons President Iván Duque is heading to Washington on Wednesday to meet U.S President Donald Trump is to secure an additional US$150 million to help deal with the constant flow of migrants. “Those who think that with the bat of an eye, the dictator is going to leave, well no. We must let sanctions work, and for the humanitarian aid to get through,” remarked Santos in an interview with El Tiempo.

The outpouring of support for Venezuelan migrants at the border includes numerous religious groups and charities operating soup kitchens and temporary shelters. Among the NGO’s that will establish a network of citizen journalists to promote communications as an essential human right is the Association of Christian Communication (WACC). The initiative “Entre Parceros y Panas” is set to begin this month in communities impacted by the crisis and where a culture of distrust and, in some cases, discrimination exists. The citizen journalists will receive special training from 20 community radio stations, six on the Venezuelan side of the border, six on the Colombian side, and eight in Bogotá.

The people of Venezuela have a brave leader in Juan Guaidó, but until the day Maduro is ousted from power and democracy finally restored, the humanitarian tragedy will only deepen with much-needed relief accumulating along a border where the most vulnerable are starving.