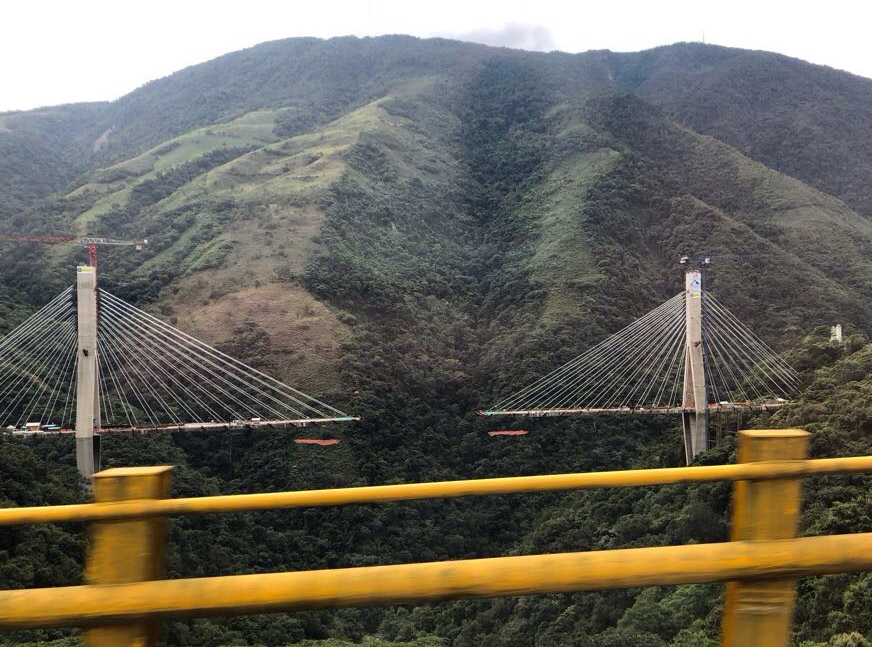 A suspension bridge that was to shorten significantly the travel distance between the Colombian capital, Bogotá, and the capital of Meta department, Villavicencio, has collapsed, resulting in the death of at least nine persons, including construction engineers working on the site. The death toll is expected to rise.

Eight persons are confirmed injured in the tragedy and are being attended to in hospitals in Villavicencio.

The unfinished bridge, part of a major infrastructure project on the much-transited Bogotá to Villavicencio highway collapsed Monday at midday, sending columns of concrete and steel into the narrow Ríonegro gorge at the height of Kilometer 64. The planned 614-meter bridge was just 20-meters from being completed confirmed Colombia’s Minister of Transport Germán Cardona.

The distance between Bogotá and Villavicencio is 86 kilometers, but given the difficult terrain, travel time can take up to three hours.

The road is also known for being very narrow and steep, dropping-off 2,000 meters from the height of the Sabana de Bogotá, to reach the lowlands of the Eastern plains.

Emergency crews at the scene of the accident have pulled from the rubble three bodies, believed to be employees of the road’s concession company Covinandes. According to a eyewitness reports, at least 21 construction workers were on the bridge at the time one of two 258 meter high towers collapsed.

Some 120 workers are at the site on any given day.

The bridge was to be one of the engineering feats of Colombia’s Fourth Generation, dubbed 4G, highway modernization projects. The so-called Vía al Llano connects the capital with the oil and agriculturally rich Llanos Orientales.

Last November, President Juan Manuel Santos inaugurated one of the longest of 16 tunnels along the highway and visited the bridge that was to be completed by March this year. Santos’ visit coincided with the religious festival of the Virgin de Chirajara, the municipality where the bridge was being built.

Some 12,000 vehicles use the Vía al Llano every day, and which counts on three tolls, ambulance, police and tow truck services.

Segments of the highway were closed Monday afternoon to facilitate the work of emergency crews, confirmed Colombia’s Ministry of Transportation and roads entity, Invías.