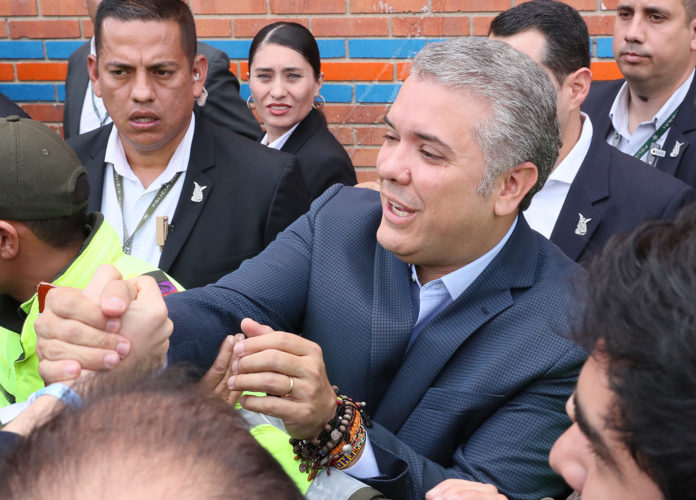 Some 890,000 Colombians in 69 countries were eligible to vote in Sunday’s highly polarized election. Voter turn-out was heavy throughout the day and authorities reported that no public order problems were reported.

The country’s second guerrilla group, National Liberation Army (ELN), upheld their ceasefire agreement, after the fifth cycle of peace talks taking place with the Colombian government in Havana, Cuba, failed to produce a lasting bilateral truce. “These have been the most peaceful elections in the history of Colombia,” remarked the National Registrar Juan Carlos Galindo when polls closed nationwide at 4 pm.

In the first official bulletin released by the National Registry, the 41-year old lawyer and economist had 53,1% of the vote and Gustavo Petro 42,9%. By Bulletin No.3 –  at 4:20 pm – Duque began surging ahead with 57% of votes compared with Petro 39%. This tendency remained throughout the entire vote count.

Bogotá is responsible for 20% of the national vote and in the Colombian capital, Petro won the majority, as well as in the southern department of Valle del Cauca, and coastal department of Sucre.

Duque swept the country’s coffee departments Caldas, Risaralda, Quindío and Antioquia, a bastion of support for Centro Democrático’s founder, Álvaro Uribe Vélez, former governor and who served as 31st President of Colombia from 2002 to 2010.

Half and hour after polls closed with 45% of total votes counted, Duque had 56% of the vote and Petro 39,6%. With bulletin No.6 (or 68% of the total vote), Duque’s marked a 2 million vote advantage over the former M-19 guerrilla member.

Duque becomes Colombia’s youngest president and will be sworn in on August 7.

Upon receiving the official results that confirmed Duque’s victory, President Juan Manuel Santos called the president-elect to congratulate him.

FARC’s former top commander, Rodrigo Londoño, known by his wartime alias “Timochenko” tweeted a message of congratulations to Duque, saying “the roads of hope are open” and celebrating “a moment of greatness and reconciliation for Colombia.”

Despite a 12 point difference and clear political mandate for Duque, Petro did not congratulate his political rival, but accepted the “triumph of Duque.”