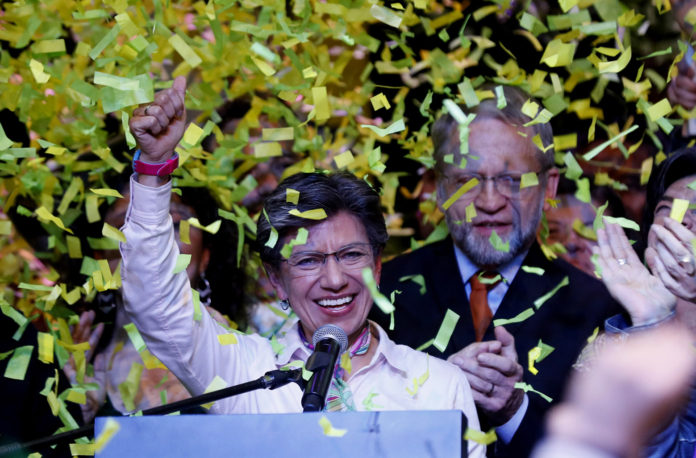 The national elections on Sunday, October 27, was to a large extent focused on the outcome of the mayoral race in the Colombian capital, and well-deserved victory by the Green Alliance candidate Claudia López. As the first woman to occupy the second-most important political seat in the country and responsible for governing a city of 9 million inhabitants, López’s anti-corruption agenda and socially inclusive vision for Bogotá resulted in more than 1.1 million votes and highest registered count in a Bogotá mayoral race.

Even though López was, according to polls, “neck-and-neck” during much of the 45-day campaign with another independent Carlos Fernando Galán of the coalition Bogotá para La Gente, the former Green party Senator and vice-presidential formula was given a decisive mandate to implement new infrastructure projects for the capital, resolve mobility issues and provide free, high-quality education to students.

López’s victory marks a departure from previous elections when leading candidates had the backing of traditional parties, and trend that marked other mayoral races across the country, including Medellín where another independent Daniel Quintero Calle, won with 303,000 votes compared to Luís Alfredo Ramos of the right-wing Centro Democratico with 235,000 votes. The upset by the 39-year old Quintero in a region considered the political bastion of former President Álvaro Uribe Vélez shows how younger voters elected candidates without the clientelism and polarizing discourse represented in political elites. And in Cartagena, voters rejected a cacique of the coast, represented in William García and gave the political “unknown” Willam Dau the mayoralty with 113,000 votes, compared to García’s 102,700.

Barranquilla, the political seat of one of the coast’s most influential families, the Char, secured the mayoralty with Jaime Pumarejo, and the city’s former mayor Elsa Noguera was elected Governor of Atlántico. But next door, in the department of Magdalena, the self-professed “anti-politician” Carlos Caicedo secured the mayoralty of Santa Marta, successfully blocking the advance of two powerful clans, the Noguera and Cote. In Cali, capital of Valle de Cauca, voters also elected an independent with Jorge Iván Ospina and gave the governorship to Clara Luz Roldán.

The political losses suffered by the right with Centro Democrático, party personified in the two-term President and Senator Álvaro Uribe Vélez, was of seismic proportions. In Bogotá, Centro’s official candidate Miguel Uribe Turbay came last with 13.5% of the vote (426,000) and a disappointing showing given his track record in public service. In the words of Claudia López during her election night speech, Uribe’s future: “is distanced from the alleged support of a political party,” and called on the 33-year old conservative to “join and follow the path of his generation.”

The party represented by former Bogotá mayor Gustavo Petro, Colombia Humana, was also one of the election’s big “losers” with the official candidate Hollman Morris narrowly gaining more votes than Uribe. When the National Civil Registry confirmed López’s victory hours after voting ended Sunday, Petro took to Twitter saying: “In Bogotá, Claudia López wins. She does not represent us. The Colombia Humana Movement will be independent of her government.” Hardly a congratulatory message. And a tweet by columnist Felix de Bedout sums of the mood of the nation the day after these historic elections. “Uribe lost in Bogotá, Medellín Antioquia, Cali, Manizales, Bucaramanga, Pereira, Cartagena, Popayan, Caldas, Boyacá, Cordoba, Sucre, Guajira. And Petro did not win anywhere.”