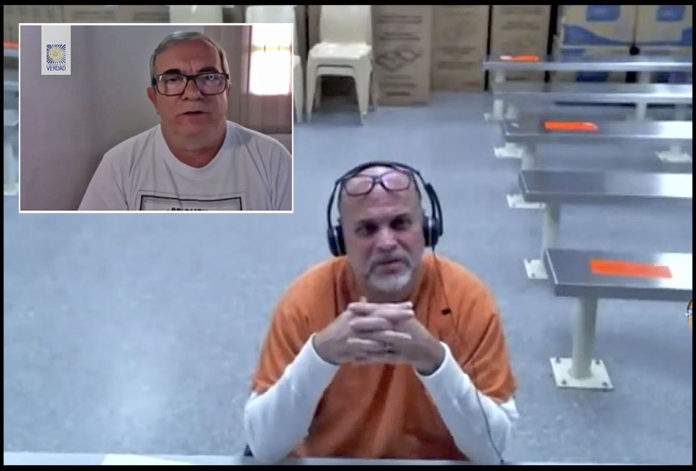 Two of the most bitter enemies in Colombia’s internal conflict, and commanders of powerful illegal armed groups responsible for atrocities against civilians, faced each other in a virtual meeting on Wednesday.

The encounter was organized by the country’s Special Jurisdiction for Peace (JEP), and presided over by Jesuit priest Francisco de Roux, president of the tribunal’s Truth Commission. FARC’s former top commander Rodrigo Londoño (known by his war alias Timochenko) and Salvatore Mancuso of the paramilitary United Self-Defense Forces of Colombia – AUC – explained to victims what motivated their enmity and degradation of a conflict that resulted in thousands forcibly displaced and massacres against civilian populations.

Separated by technological divides given coronavirus restrictions, as well as real physical distance as Mancuso is serving a prison sentence inside a Georgia penitentiary on drugs trafficking charges, while Londoño spoke from his Bogotá residence, both former warlords asked the court to recognize their responsibilities in a conflict that in the words of Londoño “generated deep wounds in society.” De Roux reminded the audience that “we are not judges, the Commission is a space to tell each other truths with transparency and clarity.”

With this opening statement and for the next two hours, Londoño recounted his years as a Marxist revolutionary within an organization that JEP recently ruled was responsible for War Crimes and crimes against humanity. “Life gave me the privilege of being the signer of peace,” said Londoño. “I have the possibility of working to heal those wounds.”

Mancuso, on the other hand, saw his role in the AUC as part of a “political, military and economic project,” that grew under brothers Carlos and Vicente Castaño to protect the interests of cattle ranchers and powerful agro industrialists from the scourge of guerrilla extortion and kidnapping. “This is not a justification or apology, it is only what happened years ago, when we were actors in the war,” remarked the orange-clad Mancuso who was extradited to the U.S in 2008.

The contributions of Londoño and Mancuso in explaining the reasons why both groups waged war of attrition, ending with the demobilization of AUC during the last Presidential term of Álvaro Uribe Vélez (2002-2010), and FARC with the 2016 Final Accord, didn’t appease the suffering of victims, but was the most recent act of contrition along Colombia’s elusive road to peace. “I invite all victims not to lose hope. We will fight so that truth from everywhere is brought to light,” stated De Roux, before these former arch enemies faded from this historical moment.

After FARC disarmament, what next for Colombia’s peace?