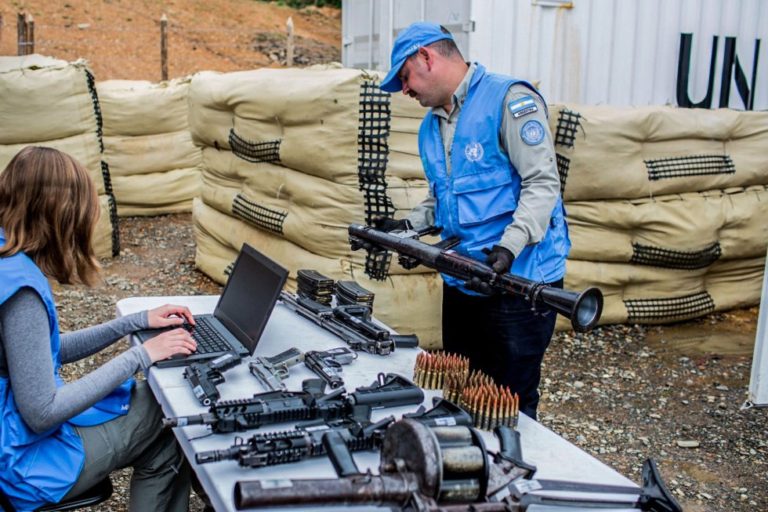 The oldest guerrilla insurgency in the world, the Revolutionary Armed Forces of Colombia (FARC) has ceased to exist.

After completing the handover of 100% of their weapons to monitors of the United Nations on Sunday and meeting a final deadline agreed upon with the Colombian Government, on Tuesday, in one of the group’s former military strongholds, Mesetas (Meta), FARC launch themselves as a political party.

The three month long disarmament process collected 7,132 weapons that are now sealed inside United Nations containers, including ammunition and explosive materials of war from 77 caches – caletas – hidden deep in the Colombian jungle. The end of FARC as a fighting force will be marked with a ceremony attended by representatives of the Havana peace negotiating teams, FARC’s senior commander Rodrigo Londoño Echeverri, and Colombian President Juan Manuel Santos.

Arriving on the eve of the ceremony at the transitional demobilization camp Mariana Páez, near the town of Mesetas, Londoño  – known as “Timockenko” – remarked on Twitter that “there is great emotion and much expectation.” Londoño will shake hands with Santos in a symbolic gesture marking the end of 53-years of an internal conflict in which an estimated 260,000 persons were killed.

The last time Santos and “Timochenko” met was on 24 November last year in Bogotá, during the signing of a revised peace accord. The ceremony at the emblematic Colón Theatre followed an original signing in the colonial city of Cartagena on 26 September.

The event will be presided over by Jean Arnault, Special Representative of the Secretary-General for Colombia and Head of the UN Mission in Colombia. “Colombia’s peace process is an example that should be replicated around the world,” said Arnault. “The handover of weapons has been honored.”

According to the United Nations, the weapons collected from FARC are many more than those involved in other conflicts around the world, and highly sophisticated.

Several former combatants will be given the official Colombian identity card – cédula de ciudadanía – during the ceremony and officially starting a new life as civilians.

Mesetas, located 90 kilometers southwest of Bogotá, was militarily strategic for FARC, serving as a gateway to the eastern plains and Serranía de la Macarena mountain range.

During the failed peace talks from 1998 to 2002 between the conservative government of President Andrés Pastrana and FARC’s founder Manuel Marulanda Vélez, alias “Tirofijo”, the town of Mesetas formed part of a demilitarized zone.