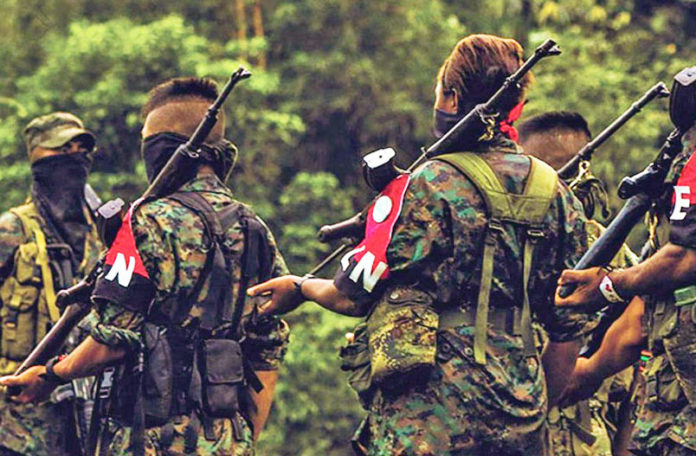 The National Liberation Army (Ejercito de Liberación Nacional) guerrilla, known by its acronym ELN,  has announced a nationwide Armed Strike from Thursday, February 14 (6:00 am) to Monday, February 17 (6:00 am). The “paro armado” falls within the dates of the anniversary of the death of the organization’s founder Camilo Torres on February 15, 1966.

Camilo Torres, known as the “Guerrilla Priest,” abandoned the priesthood to join the armed insurgency based on the principles of Liberation Theology. Torres was killed by the Colombian Army during a confrontation in Patio Cemento, a small town in the department of Santander.

According to a statement released by the guerrilla from the mountainous region of Catatumbo, Norte de Santander, the 72-hour Armed Strike warns civilians “to avoid all road, air and river transport.” The statement goes on to claim that “by following this order, being prudent and staying inside your homes, will avoid regretful consequences.”

Pamphlets announcing the Armed Strike are circulating in the departments of Antioquia, Cauca, Boyacá, Arauca, Santander and Norte de Santander. During previous Armed Strikes, the guerrilla has attacked key road and energy infrastructure. The 3,000-strong Marxist guerrilla also threatened attacks on those who travel on roads, especially if they are in caravans escorted by the Army. “During the Armed Strike, the right to transport patients who need hospital treatment, as well as the movement of relatives to attend funeral matters, will be respected,” writes ELN.

In response to the announcement, the Colombian Army has been placed on maximum alert “to meet all requirements of citizens’ protection,” said Defense Minister Carlos Holmes Trujillo. Trujillo added that “all Defense Forces and National Police will respond with adequate and legitimate firmness to the threats of terrorists.” General Óscar Gómez, commander of the Bogotá Police also announced measures to prioritize surveillance points in the capital, from government buildings to public, educational, military and police installations.

On January 17, 2019, the ELN targeted the country’s largest Police Academy – Escuela de Cadetes General Santander – with a car bomb, killing 22 cadets and injuring more than 60. Following the attack, the Colombian Government ended peace negotiations with the ELN and requested the Cuban Government hand-over the organization’s senior commanders for prosecution. The members of ELN’s Central command – COSE – remain in Cuba, despite a Red Alert arrest warrant issued by Interpol.

The ELN’s Communiqué No.2 is signed “Liberation or Death!”