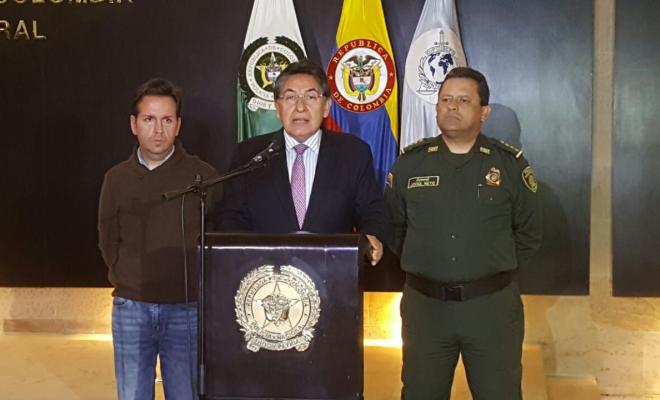 “The state can triumph over terrorism,” remarked Colombian Attorney General Nestor Humberto Martínez Saturday night during a press conference in the capital Bogotá, in which he confirmed the capture of eight suspects involved in the June 17 bombing of the Centro Andino shopping mall in which three women were killed and nine injured.

In a coordinated effort with the Colombian National Police, Nestor Humberto Martínez claimed the investigation went ahead “at lighting speed,” and thanks to this joint effort, it resulted in the capture of eight individuals affiliated with a new urban militia group known as Movimiento Revolutionario del Pueblo (MRP), or People’s Revolutionary Movement.

Exactly a week after a bomb exploded in a women’s bathroom on the second floor of the Centro Andino in Bogotá’s Zona Rosa district, the Attorney General accompanied by General Jorge Nieto, Colombia’s National Police director, and Bogotá’s chief of security Daniel Mejía, confirmed the capture of four men and four women, who will face on charges on Sunday that include terrorism, homicide, kidnapping, theft and conspiracy to commit an act of violence.

The first security operation took place in the town of El Espinal, Tolima, in which three men and one woman were captured, while enjoying a local fair in that department. Four arrests were made simultaneously in Bogotá. Nestor Humberto Martínez thanked the collaboration of citizens in helping to provide information to the security agencies involved in the investigation. Some 200 agents from the Fiscalia participated in the case that resulted in the arrests.

Bogotá Mayor, Enrique Peñalosa congratulated the work of the national police and Attorney General for the capture of the  Andino bombers. “Bogotá will not bow to terrorism,” he wrote.

Police chief General Nieto also stated that as a result of the arrests, the alleged suspects will clarify involvement the group’s involvement in 14 other attacks since 2015, including a rash of attacks in the capital of Risaralda department, Pereira.

Besides eyewitness testimonies, intelligence officers examined hours of footage from 250 security cameras located inside the shopping center in order to identify the suspects who coordinated a terrorist attack in one of the capital’s most visited areas. The bomb that exploded at 5:10pm on the Saturday before Father’s Day claimed the lives of Ana María Gutiérrez, 41, Lady Paola Jaimes, 31, and French citizen, Julie Huynh, age 23.

Extra-officially, none of the three victims who died in the bathroom of the Andino had explosive residue on their bodies that could implicated them as suspects in this on-going case.

The eight persons captured during 10 police operations across Bogotá and Tolima department will be formally charged Sunday at the Paloquemao justice center. More arrests are likely in the up coming days and weeks.