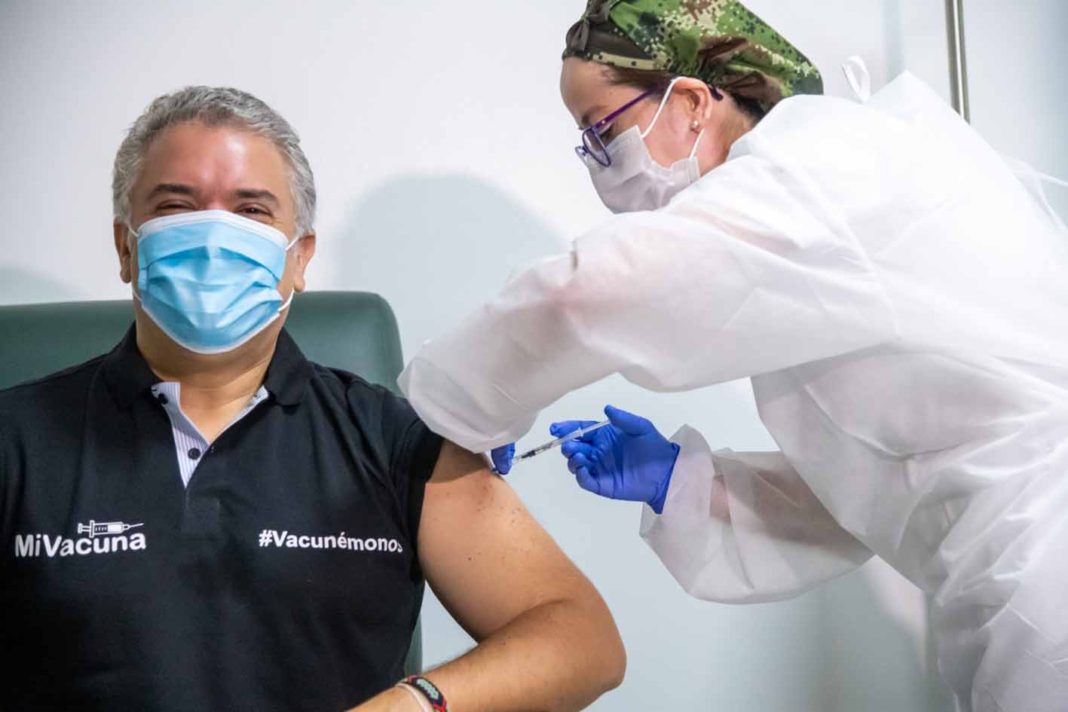 After 13 million Colombians have received first and second doses of the coronavirus vaccine, on Sunday, President Iván Duque finally got to roll-up his sleeve and get a first jab of Pfizer.

The inoculation of the 45-year of head of state was followed by a brief statement at the Central Military Hospital in Bogotá, where President Duque paid a tribute “to all the people who, in the midst of this painful pandemic, have died in the world, in Latin America and, of course, in our beloved Colombia.”

Duque also thanked healthcare workers for their dedication and care as the nation registers record numbers in new cases and disease-related deaths. And hours after Duque was given his first dose, the Ministry of Health confirmed an additional 586 COVID-19 fatalities – highest single day on record – raising the country’s death toll to 95,778.

After almost six weeks of anti-government demonstrations with a national strike, and which stymied the deceleration of the third wave in new cases, President Duque called on Colombians to “reconcile with the moment we are living in,” and assume the constitutional right to peaceful protest with “responsibility.”

Since strike action was declared on April 28, Colombia has registered per day deaths above 500, as well as 30,000 additional victims. “We have to be aware that in recent weeks this situation (infections and numbers of deaths) has deteriorated due to agglomerations in various parts of our territory,” stated Duque. “Agglomerations in which one participates today, and that can represent the contagion of a loved one and, sadly, a fatal outcome tomorrow.”

The Ministry of Health aims to complete for June the vaccination of 17 million citizens, of 35 million necessary to reach herd immunity among 70 percent of the total population. On Sunday, Colombia received another shipment of 204,000 doses from AstraZeneca putting the total number of available doses for second jabs at 3.8 million.

FARC’s “Timochenko” calls on Colombians to rally behind presidency of Iván...