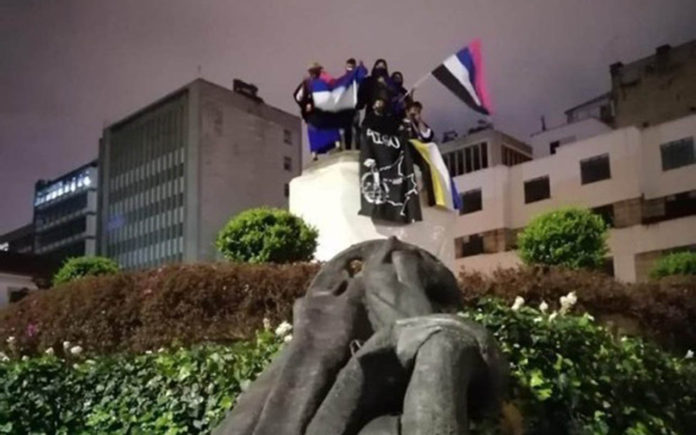 Early on Friday morning members of the Misak indigenous community from the department of Cauca in southwest Colombia toppled the statue of Bogotá’s founder, Spanish conquistador Gonzalo Jiménez de Quesada (1509 – 1579) in the historic center of the capital. Jiménez de Quesada is the second conquistador to fall flat on this face during 10 days of the national strike.

The Misak leveled a statue of conquistador Sebastián de Belalcázar in the city Cali during the first day of the Paro Nacional. Belalcázar founded Cali and Popayán as he marched south to conquer the northernmost city of the Inca Empire, today’s Quito, capital of Ecuador. Jiménez de Quesada founded Bogotá as a colonial outpost on August 6, 1538.

The downfall of a statute that stood in the center of the Plazoleta del Rosario and hemmed-in by emerald traders, students, clerks, and shoeshiners won’t alter the cityscape of La Candelaría’s merangerie of colonial, Republican, Bauhaus and post-modernist architecture, but does for many residents represent the imposition of cultural revisionism without the activists following legal recourses available to petition the district to remove a symbol of 16th Century repression and brutality.

The statue was donated to the Colombian Government in 1960 by Spain and the work of the sculptor Juan de Ávalos (1911 – 2006). The statue was inaugurated in front of the city’s oldest church Las Aguas before moved eight years later to the corner of the Bucholtz booksellers on Carrera 9 with Avenida Jiménez. In 1988, the explorer was relocated again to adorn the Plazoleta del Rosario.

11:00 Minister of Defense Diego Molano confirms reopening of the Bogotá – Tunja highway allowing trucks and vehicles to enter the Colombian capital after protestors lifted their barricades near Tocancipá, 40 km north of the capital.

11:48 Mayor Claudia López, the district’s Health Secretariat Alejandro Gómez and Minister of Health Fernando Ruíz held a joint press conference in which they announced that Mother’s Day will be postponed from this Sunday, May 9 to May 30 based on ICU occupancy in city hospitals at 94.4%. “It is important that Bogotanos and other residents of the country understand that we are at a critical moment with the pandemc, and we must try not to celebrate nor get-together inside homes,” said Ruíz.

13:00 Sixteen protests are taking place in different parts of Bogotá, including Monument Los Héroes, Parque Nacional, Avenide Chile with Cra 11; Universidad Distrital (Calle 40 with Cra 7); Cra 7 with 45 (Javeriana). According to the Mobility Secretariat an estimated 2,500 persons are protesting.

Members of the NASA Indigenous Guard arrive in Bogotá along with community leaders to join the social protest.

17:00 Ministry of Health confirms 17,525 additional cases of coronavirus and 453 fatalities from the disease. Bogotá registered 5,704 cases, followed by the department of Antioquia with 2,342.