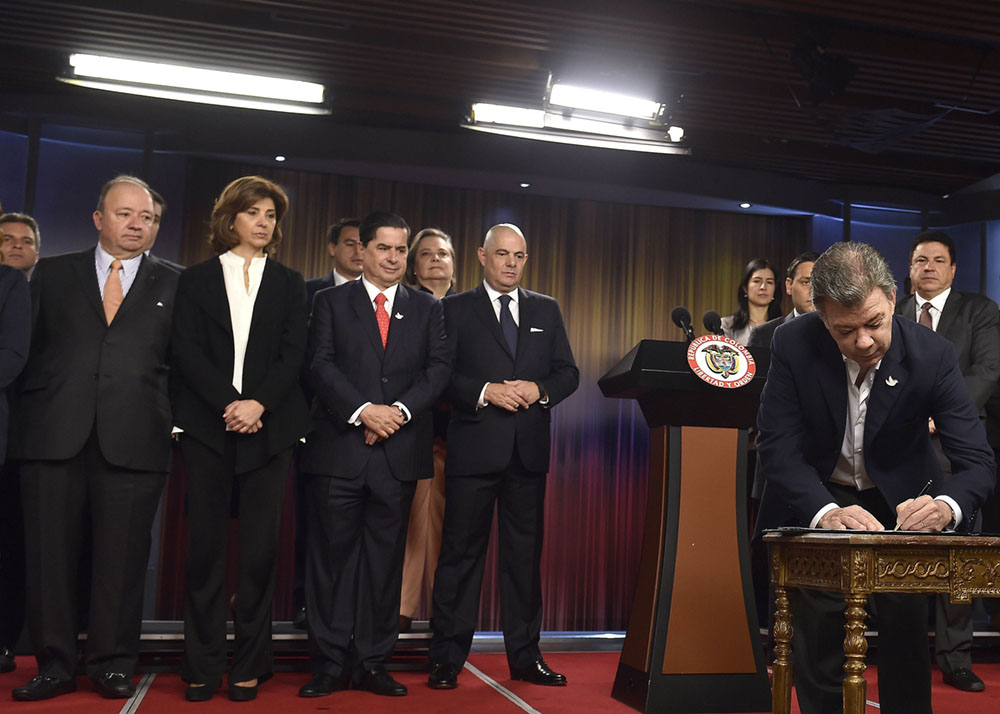 After more than a half century of conflict with the Revolutionary Armed Forces of Colombia (FARC) on Wednesday night, in a modest setting of a Havana conference room, the end of the war was finally declared by Humberto de La Calle.

The government’s senior peace negotiator had achieved what millions in this country had never thought possible – the unreachable prospect of ending a brutal internal conflict that claimed the lives of 220,000 Colombians and forced millions to become internally displaced.

With the words “The war is over,” Humberto De La Calle ended four years of peace talks with an adversary that to many Colombians seemed too cynical and too violent to ever sincerely relinquish their weapons of war. But as the chief negotiator addressed his fellow citizens during the live transmission from Havana, after presenting the Final Accord reached with FARC, Colombians celebrated, for many have never enjoyed a day of peace with FARC in their lifetimes. “We this we open the door to a more inclusive society,” said De La Calle “one in which we can recognize each other as Colombians, and where no one must ever fear for their integrity as a result of their political ideas.”

The Final Accord will be put to the Colombian people with a “Yes” or “No” question in a plebiscite October 2.

With the war over with FARC, the challenge in the months ahead for the government of Juan Manuel Santos is to convince Colombians that the Final Accord is the only one attainable and necessary outcome to end years dialogue and decades of bloodshed. “We need understanding, altruism, tenacity and patience,” affirmed De La Calle. “We owe each other a new lease on life.”

For Iván Marquéz, the FARC’s appointed top peace negotiator, reaching the Final Accord and signing the peace was “the most beautiful of all battles.” The former guerrilla commander went on to claim that “the battle of weapons ends where the battle of ideas begins.”

For both De La Calle and Marquéz, the deal is not just a agreement forged between former foes, but a roadmap for a future of greater social equality and closing the gap between the urban and rural worlds. “There’s a clear objective in recovering the dignity of peasant families,” said De La Calle.

After the announcement from Havana, President Santos addressed the nation from the Presidential Palace, stating that “Today marks the beginning of the end of the suffering, the pain and the tragedy of the war.” The head of state thanked the government’s delegation in Havana, as well as FARC negotiators for their dedication and determination to reach this historic moment and one that “responds to the dimensions of the conflict.”

The 297-page document is now in the hands of Colombians. With just over a month until the plebiscite, there will be plenty of public discussion on what was agreed upon in Havana. The FARC must now embark on a bold new future of winning over the hearts and minds of their fellow citizens at the ballot box and waiting for the outcome of what appears to be heavily-contested vote for both the “Yes” and “No”.