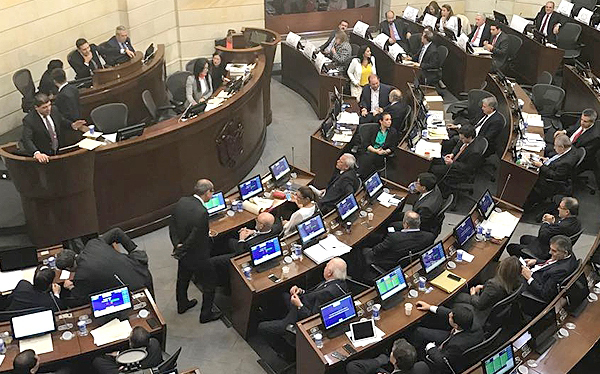 The deal, which if passed will end more than a half-century of conflict, was passed 75-0 with no official dissenting votes. But the proceedings were highlighted by the ongoing opposition of former President Álvaro Uribe’s political party, which left the chamber in protest and refused to take part in the vote.

The vote came after more than 13 hours of legislative debate that all members took part in, despite Uribe’s threat to skip the process altogether. But the Democratic Center party departed as it became clear that the deal’s supporters would easily hit the 51 votes needed to ratify the accord.

“It was a historic day, where the Congress of the Republic debated the most important issue for Colombia, the endorsement of peace,” said Mauricio Lizcano, president of the Senate. “It was a debate with stature, with ideas — a debate in which all the guarantees were given to the opposition.”

Senator Teresita García thanked the “No” campaign that, on October 2, struck down an earlier version of the deal in a nationwide plebiscite. The new agreement forged after more than 40 days of renewed negotiations with FARC in Havana, Cuba, is an improved document, according to the senator. “Thank you to the Colombians who voted ‘No,'” said Garcia. “Today there is a more structured agreement.”

Uribe and the opposition don’t believe the changes made in the interim were nearly enough, however. Their primary concerns, widely reflected among the general public who showed their dissent at the ballot box, focus on the agreement being too light on war criminals and containing overly generous guarantees of political participation for the guerrillas.

Neither of these items were significantly overhauled during the second round of talks between the Santos administration and FARC.

“The new accord does not include the substantial modifications proposed by the coalition of ‘No,'” said Senator Iván Duque, a member of the Democratic Center.

The Final Accord now moves to debate today in Colombia’s House of Representatives, the bicameral legislature’s lower chamber. It is expected to pass by a wide margin in the House, where those supporting Santos’ plan for peace have an even larger majority.