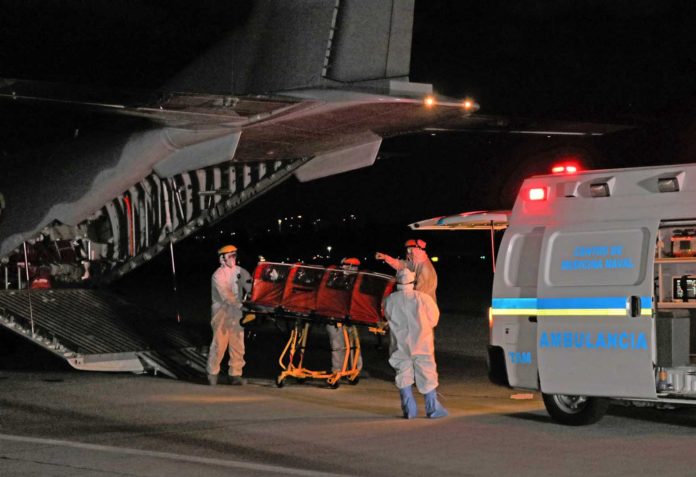 A Colombian Air Force C-295 heavy load freighter has been adapted to transport critically ill COVID-19 patients from remote regions of the country to ICU-equipped hospitals in major cities, joining the fight to protect vulnerable populations from community spread of novel coronavirus.

The C-295 aircraft is capable of moving two patients per flight in isolated sections along with medical crews and life support equipment. The short take-off and landing aircraft will be based at the military airport CATAM in Bogotá and will conduct missions to towns with basic aeronautical infrastructure.

On Tuesday, the Ministry of Health confirmed a first shipment of 50,000 COVID-19 fast testing kits from the U.S pharmaceutical company Abbott Laboratories, and part of 1,045,000 agreed upon with the Colombian government. In Bogotá, the city most affected by the coronavirus outbreak in the country, district health authorities confirmed that 11,500 COVID-19 tests have been performed on individuals with symptoms since the outbreak a month ago.

In its daily report of infections, the Ministry of Health confirmed 201 new cases of coronavirus in Colombia putting the national total at 1780. The National Institute of Health processed 2,559 samples, 658 more than on Monday.

Bogotá saw an increase of 85 new cases putting the city’s total at 861.

Twenty-five deaths in hospitals have been confirmed since March 6.

The number of patients who have recovered from the disease: 100.

During the televised announcement by President Iván Duque on Monday that the nationwide quarantine will be extended two-weeks to advance flattening the epidemiological curve, Minister of Health Fernando Ruíz remarked that the infection rate across the country was lower than the government had initially forecast, with an estimated 5,700 cases of COVID-19 in the first month of the outbreak compared to the actual 1,500. “There is a very big difference between what we thought we were going to have and our reality,” he said.

Colombia’s “epi-curve” according to the John Hopkins COVID-19 dashboard, as of Monday, April 6: