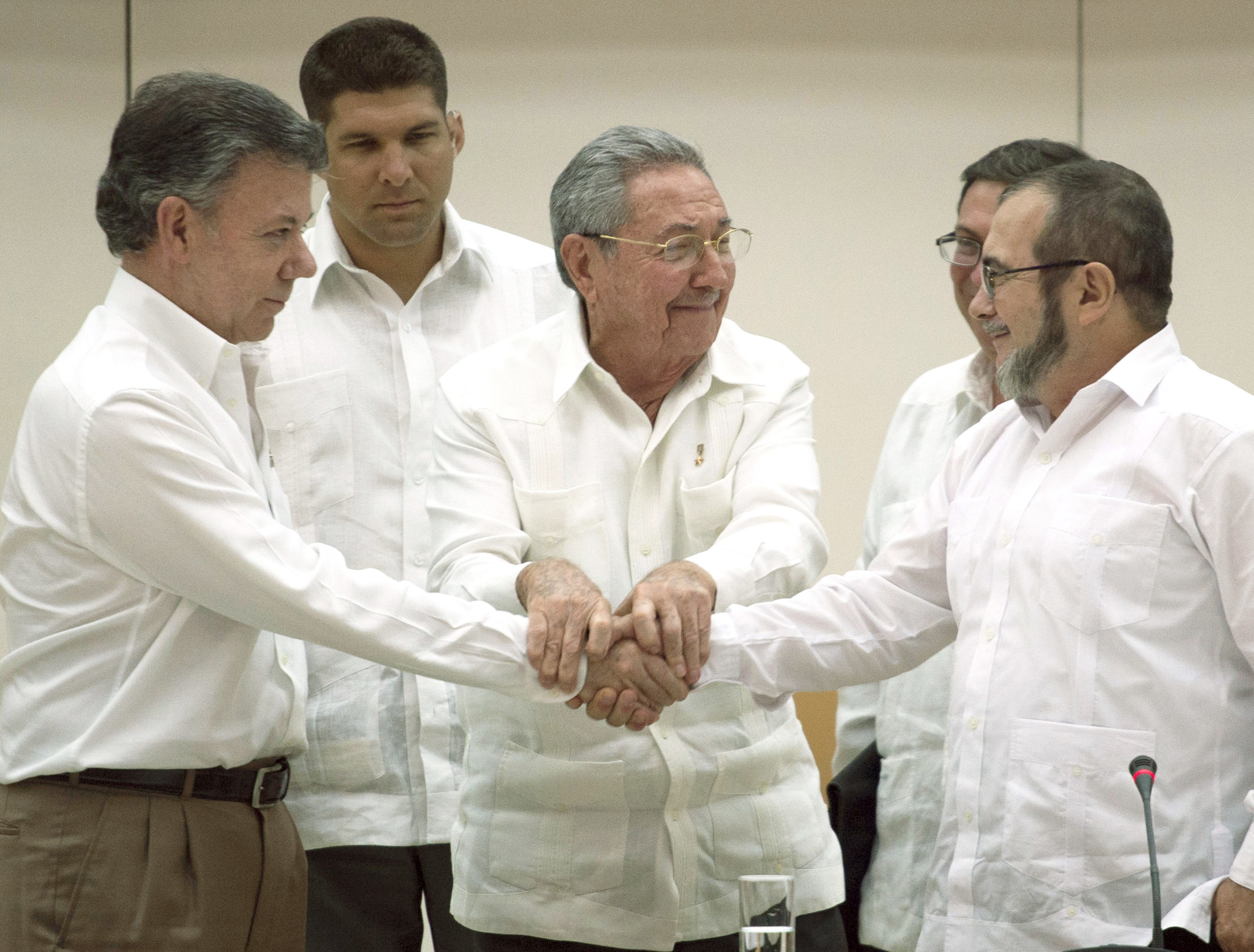 [dropcap]I[/dropcap]t was an awkward moment for Colombian President Juan Manuel Santos when at the end of an historic encounter in Havana, Cuba, the top commander of the Revolutionary Armed Forces of Colombia (FARC), Timoleón Jiménez, alias “Timochenko,” extended a handshake.

It was quickly sealed by Cuban President, Raúl Castro, who remarked that peace for Colombia was “indispensable” and thanked Santos and “Timochenko” for their determination to end the last conflict in South America.

After hours of anticipation of this sudden and historic encounter between Santos and his FARC adversary, Colombians watched in awe as a definitive peace agreement seemed closer than ever after 60 years of armed conflict. Both Santos and “Timochenko” turned up at the peace table at the Havana Convention Center dressed in white shirts.

“I have come to Havana to announce to Colombians, especially the victims of the conflict, that we have reached agreement on a system of justice, which allows me to say with conviction that we will achieve the maximum justice possible and the maximum possible satisfaction of their rights,” said Santos.

As history went primetime and millions of Colombians were glued to their television sets, hanging on each and every word of the agreed upon terms of one of the most contentious issues of the peace agenda, President Santos and “Timochenko” addressed their respective peace negotiators, representatives from the Cuban government and the guarantor nations of Venezuela and Norway.

Santos also thanked the Venezuelan government for working for the peace of Colombia and stated that a final accord would be reached within six months.

Santos turned up in Havana where negotiations have been progressing for three years to announce that the two sides had agreed there will be no amnesty for war crimes. This issue of justice for the victims of war has been the largest barrier to ending the conflict, and the deal that has been reached will establish a truth commission to ensure that “the crimes committed during the conflict, especially the most serious and representative, will not be unpunished,” according to President Santos.

Those found guilty of war crimes and who willingly confess and cooperate will receive prison terms between five and eight years. For those who do not willingly confess, terms could extend to 20 years. This judicial framework includes all the armed actors of the conflict, including the military, paramilitaries and civilians.

With the details of justice and punishment decided, President Santos said that the final peace agreement will be reached within six months – no later than March 23, 2016 – and that FARC will lay down all its weapons within 60 days of the official signing.

Highlights of the transitional justice agreement include a commitment from both sides to find a justice “formula” that guarantees the rights of victims of the 60-year-old internal conflict and “contributes to building a stable and lasting peace.” Both the Colombian government and FARC expressed their commitment to ending the conflict “so that never again is it repeated.”

The government and rebels will form part of a commission investigating the truth of the conflict and victims reparations. A “Peace Court” will be established with special jurisdiction over all other courts and with specially appointed magistrates and judges.

The Colombian peace process could also become a future case study for conflict resolution and finding the necessary balance between justice and reparations.

After all obstacles were cleared with this fifth talking point of agenda, a sub-commission in Havana is now moving forward with the “End of the Conflict” terms and security measures.

But on this historic day in Havana, peace has come in a handshake between two bitter adversaries who pledged a future of dialogue and reconciliation.