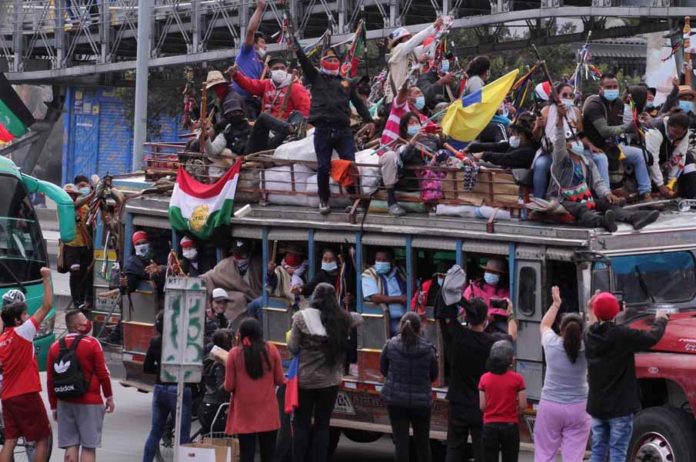 Bogotá is bracing itself for days of anti-government marches that will culminate  Wednesday with the national strike – Paro Nacional – summoned by civic organizations, human rights groups, unions and leaders of the country’s left-wing political parties.

Almost a year after the first mass protests of the National Strike on November 21 and which resulted in widespread acts of vandalism, looting and confrontations with the National Police, Wednesday’s mobilizations also include some 7,500 members of the country’s indigenous peoples rallied together as a Minga.

After a nine-day walk from the southwestern city of Cali, the Minga was welcomed to the capital city on Sunday by Bogotá Mayor Claudia López, who stated on Twitter: “Bogotá received the indigenous Minga as it deserves, with affection and respect. No danger has arrived. Citizens have come with legitimate causes, healthy and after a totally peaceful journey.” López went on to add in a separate tweet: “We in the Mayor’s Office do not have the power to prohibit or approve marches; our role is to accompany them and ensure that they are peaceful.” On Monday, the Minga will concentrate in Bogotá’s central square Plaza de Bolívar.

With the security presence of the district administration, as well as members of the Indigenous Guard with their ancestral wood batons, the Minga commands respect from many Colombians as a traditional organization that represents indigenous authority. As the Minga takes to the streets of the capital, fears that such a large gathering ahead of Wednesday’s Paro Nacional could reverse the lowering trend in new coronavirus cases was expressed by Bruce Mac Master, President of the Federation of Business (ANDI), who remarked: ‘At a time in which economic indicators are terrible, these protests are a threat to economic health and reactivation.” Mac Master’s statement comes as industrial output fell 10.6% in August, despite the government’s easing of quarantine restrictions.

As López accompanied indigenous leaders in Plaza de Bolívar, a group of masked vandals attempted to infiltrate the Minga and were blocked by the Guard in order to protect the peaceful status of the protest. The Mayor also reiterated that the Police Anti-Riot Squad (ESMAD) would not accompany demonstrators.

Monday also saw the lowest daily increase in coronavirus cases in Bogotá – 998 – the same number not seen since May 24, and also the fifth consecutive day in which the department of Antioquia has become the new epicenter of the pandemic.