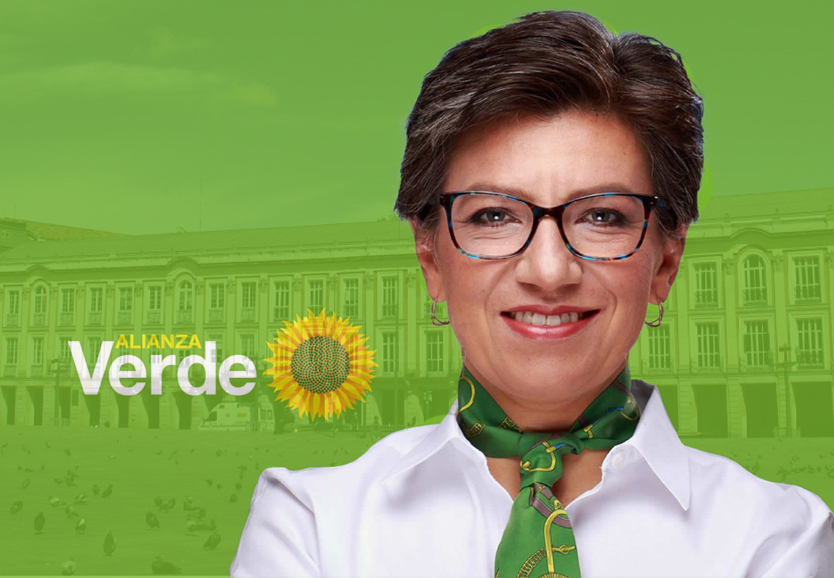 Within minutes of voting stations closing at 4:00 pm across Colombia, the independent candidate of the Alianza Verde/Polo coalition, Claudia López maintained her lead with Bogotá voters.

In keeping with the polls during a 45-day campaign, the 49-year old politician and former vice-presidential candidate won a decisive victory with 35% of the vote and margin of 84,000 over her closest rival, Carlos Fernando Galán. López becomes to first woman to be elected Mayor of Bogotá.

Also running as an independent with the coalition Bogotá para la Gente, Galán earned 32.48% of the popular vote (32.48%). Coming in third, and with a stronger showing among the electorate than pollsters had predicted, was Hollman Morris of Colombia Humana (13.97%). Miguel Uribe Turbay of the right-wing Centro Democrático party and former Secretary-General to Mayor Enrique Peñalosa came in fourth with the #Avancemos campaign (13.56%).

Bogotá witnessed heavy voter turn-out after stations opened at 8:00 am, and of 5.8 million eligible voters, an estimated 2.8 million exercised their democratic right and during a day, that according to Juan Carlos Galindo, director of the National Civil Registry, was “the most peaceful in recent history.”

Just two hours after voting ended at 16,230 booths in the capital, López’s three contenders in this highly contested race congratulated the former Green Alliance party Senator on her victory.  López is a finance and international relations graduate from Universidad Externado in Bogotá and holds a Masters in Public Administration and Urban Politics from Columbia University in New York and a doctorate in Political Science from Northwestern in Chicago.

López consolidated a strong base with voters given her anti-corruption agenda and popularity with women voters as well as Bogotá’s LGTB community. During the campaign, López received the support from center-left politicians, including Polo’s Jorge Robledo and former vice-presidential formula of Gustavo Petro, Angela María Robledo. López also had the support of former Bogotá mayor Antanas Mockus, as well as the Colombian Government’s chief peace negotiator with FARC, Humberto de la Calle.

López has promised to follow through on many large-scale infrastructure projects for the city, among them the electric elevated Metro that was given this month to the Chinese-Canadian consortium, with groundbreaking scheduled early 2020. “The Metro has won and one based on a multi-modal system that will free us from traffic gridlock and contamination,” said López during her election speech.

López’s victory is being hailed as a rebuke by Bogotá voters of traditional political parties. In her election speech, López reiterated her promise to guarantee free higher education to students and combat intolerance and xenophobia. “I will unite Bogotá and govern for everyone,” she said. And referring to Galán, Morris and Uribe, López expressed: “I know that Bogotá and Colombia will continue to count on them, as extraordinary citizens and leaders.”

López’s victory is also a triumph for Bogotá’s large LGBT community, and during her election speech, she thanked her same-sex partner Angélica Lozano for “being the love of my life, and making me happy every day.”

The incoming mayor also spoke about her vision of Bogotá as a city that “is not injured, divided or polarized. Bogotá chose a life story, trajectory and leadership style to govern for the well-being of all,” she said.