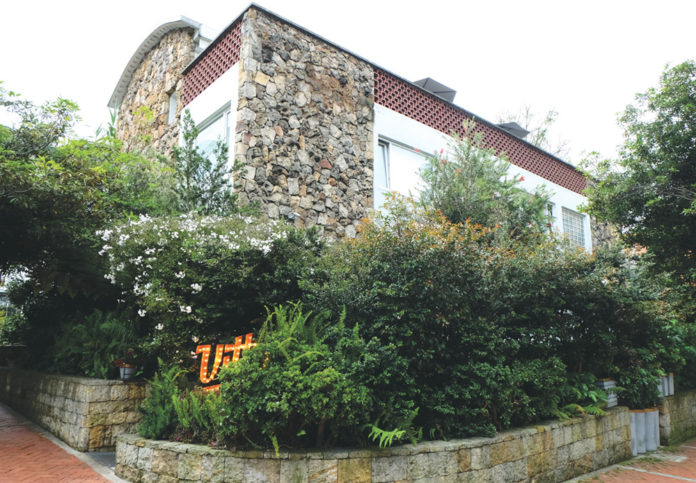 Born in New York in 1920, Jorge Gaitán Cortés returned at age nine to Bogotá, upon the death of his mother Cecilia Cortes Gregory, and fleeing with his father, the onset of the Great Depression. After graduating from the prestigious all boys Colegio San Bartolomé, he went on to study architecture at the Universidad Na- cional and Yale University. However, his first major structure wasn’t built in Bogotá, but the Baseball Stadium in Cartagena, for which he won the Na- tional Architecture Prize in 1947. But just one year later, a peaceful Bogotá would be engulfed in flames with the Bogotazo, the violence that erupted when Liberal leader Jorge Eliécer Gaitán was gunned down in the center of Bogotá on April 9, 1948.

No relative to the populist leader, except for the fact that Bogotá was a small town that reached as far north as the Parque Nacional, in 1952, Jorge Gaitán decided to move with his wife to the Chapinero, a place of eucalyptus groves, and plenty of empty land on which to build a house. The land where the boutique hotel operates was purchased from Freddy McPhilips, a British, Anglican church goer, who built the Union Church, nearby, and a recognizable Bogotá landmark for expats.

As an architect, Gaitán Cortés also knew that from the ashes of the Bogotazo a new city had to emerge, and so he began designing modernist buildings that now form part of our cityscape.

As one heads south along the Carrera 5, where the foodie Zona G district melds with the two-tier homes of Chapinero Alto, Casa Gaitán Cortés recalls an age of architectural elegance that, to this day, defines many of Bogotá’s neighborhoods.

Like Usaquén, Chapinero was saved from the rioting and destruction of that fateful day in 1948, and as an architect with a futurist vision, Jorge Cortés began to write several dissertations for his almae matres on the importance of hotels for a rapidly expanding city characterized by red brick mansions and colonial churches.

Joined by peers Rogelio Salmona and German Samper, Jorge Gaitán played an important role in bringing to Bogotá the French-Swiss architect Charles-Édouard Jeanneret, known as Le Corbusier to implement an architectural vision of the capital. As one of the most influential modern architects of the 20th century, Le Corbusier, had an enormous influence on Gaitán, and the family’s home, an example the harmonious European influences. With vaults and lofty spaces, curves and contrast of cement with brick work, the Gaitán family occupied the house on the Carrera 5 for more than three decades, until it became office space for the Organization of Inter-American States.

Juan Carlos Gaitán Villegas, son of the architect, is not only the hotel’s administrator, but remembers fondly growing up in his home of secret passageways, stairwells, and false doors. But the family home was also at the heart of Bogotá’s political and intellectual elites when the architect was elected Mayor of Bogotá in 1961. Guests who would be invited over for dinner included León de Greiff, Hernando Santos, Beatriz Santo Domingo, Cecilia de la Fuente, and Lorencita Villegas de Santos.

Gaitán’s mayoralty coincided with the historic visit in 1961 of U.S President John F. Kennedy and First Lady Jackie to the Colombian capital. Even though the 14-hour visit is remembered by the inauguration of Kennedy, a modern housing complex in the western fringes of the city that still carries the presidential name, the Gaitáns treasured this visit as one of the great moments they would share as a family. Juan Carlos still recalls his mother’s words when meeting Jacqueline Bouvier. “She was beautiful and elegant, that darn woman!”

In 1968, Jorge Gaitán Cortes, died in a freak accident, and same year Robert F. Kennedy was assassinated. While the house remained in use, the architect’s eight children began wondering what future use the house their father built could have. As an expert architect on hotels, the answer lay in their own history, and when in 2001, the children received certification from the district that the house was a conservation landmark, they began to dream of a boutique hotel.

Mario Villegas Garcia-Peña, cousin of the Gaitáns was commissioned to renovate the building, preserving the original 1950s style, but adapting the 9-bedrooms for future guests. Vintage furniture, lamps and objects now decorate the lobby and bedrooms, and clients enjoy breakfast in a long-covered terrace surrounded by vertical hanging gardens. A sensational spiral staircase, provides access the hotel’s restaurant, Vitto, which offers Italian-fusion food in a 1950s-style trattoria. Although Vitto is the culinary annex to a house once frequented by a canvas of Bogotá’s brightest, one can still sense the history with every turn. As music from a mandolin emanates from the flowering courtyard of the Casa, a refined corner of Bogotá has reclaimed its former elegance and guests are still made to feel at home just like a Kennedy.

“We are all united in Latin America” states Duque as Venezuela...