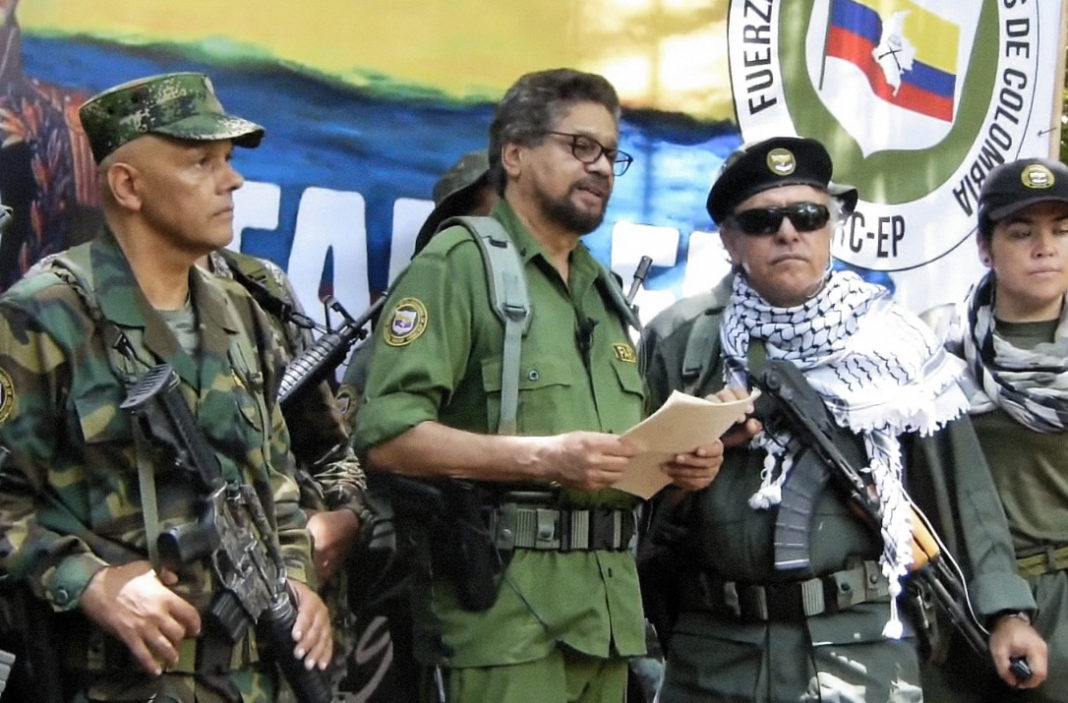 In a statement released via Youtube on Thursday, four senior former commanders of the Revolutionary Armed Forces of Colombia (FARC) guerrilla, including three former peace negotiators, confirmed their “return to arms” and appear in the video carrying rifles and dressed in military fatigues.

In the video, the former chief negotiator of FARC, Luciano Marín – alias Iván Márquez – “announces to the world the start of the second Marquetalia,” and a direct reference to the township in the department of Tolima where the Marxist insurgency was founded back on May 27, 1964.

Accompanied at his side by fugitives “Santrich”, “Romaña” and “El Paisa,” Márquez said that the return to arms was in response to the Colombian government’s “betrayal” of the peace agreement signed with FARC in 2016. “We announce that the second Marquetalia has begun […] for the protection of the universal rights of the peoples of the world to rise in arms against oppression.”

The video is believed to have been recorded in the jungles of the department of Guainía, near Puerto Inirida.

In the 30-minute video, Márquez added that the call to arms is the “continuation of the guerrilla struggle” despite the demobilization of 7,700 FARC combatants in 2017. “The unilateral modification of the text of the final agreement, the breach of the commitments by the State […] has forced us to return to the mountains,” remarked the senior commander.

The decision by Márquez, El Paisa, and Santrich to re-group with the same name FARC opens the door for a military alliance with the country’s second guerilla group, National Liberation Army (known by its Spanish acronym as ELN). “We will coordinate efforts with the ELN and those comrades who have not folded their flags,” remarked Márquez.

FARC’s former chief commander Rodrigo Londoño, known by his wartime alias as “Timochenko” was among the first to publicly denounce the creation of the “second Marquetalia” and call to arms by his former peace negotiators. “Our commitment more than ever today, as a majority, as a political party, as a country, is peace and compliance with the accords,” remarked Londoño on social media. “Timochenko” ratified the peace agreement with President Juan Manuel Santos during a ceremony in Bogotá in 2016 and reiterated that despite the “call to arms” by Márquez, Romaña, Santrich and El Paisa, more than 90% of former combatants remain committed to the peace process and return to civilian life.”Those who move away from peace are mistaken.”

Another former senior FARC commander, Pastor Alape, who has pledged his support of the Final Accord, also voiced deep concerns on Thursday regarding the  announcement: “Rearmament is an adventure that favors the enemies of peace, who today must be happy. Our total commitment is peace, NO to war!”

FARC as a political party, renamed as the Common Alternate Revolutionary Force in an official statement called on “all Colombians, the government, the international community, business leaders, representatives of social and popular movements, as well as ex-guerrillas to rally behind the accords like never before.”

President Iván Duque has yet to comment on the contents of the video declaration. However, in an unprecedented statement on Thursday, “Timochenko” told Caracol Radio that the time had come to “unite with the government and Presidency of Iván Duque.” He also apologized in the name of FARC to his fellow citizens for the “shame” incurred by Márquez, Santrich and El Paisa.

The National Liberation Army – Ejercito de Liberación Nacional – counts with some 3,000 combatants, and according to authorities, FARC dissidents could amount to 1,500. During the height of the Colombian internal conflict when former President Andrés Pastrana opened peace talks with FARC in a demilitarized zone of the Caquetá department, the Marxist guerrilla had a fighting force of some 12,000 men and women.

In the video, some 20 rebels can be seen including Henry Castellanos (alias Romaña), who commandeered the dreaded 53rd Front of FARC and mastermind of the group’s mass kidnappings of civilians.

Márquez also announced in the video his group’s “new offensive” that will target a “corrupt oligarchy.”

Colombia’s Santos: “This is the peace of everyone” as ceasefire with...