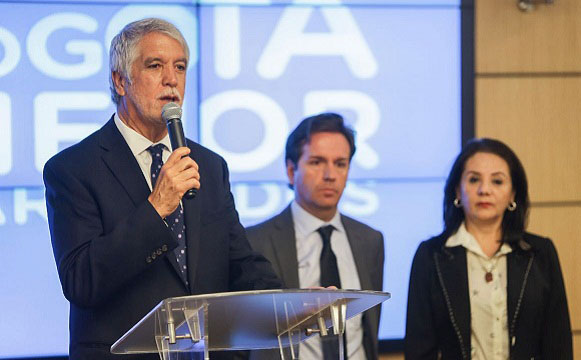 Bogotá has introduced a new digital platform to report crimes and public disturbances, Mayor Enrique Peñalosa announced this week. Through this online security initiative — Seguridad en Linea — citizens can use the government website or a smartphone app to log complaints that will be reviewed by the appropriate authorities.

The mayor said that only one out of four crime victims in the capital currently submit a formal report. The main reason is that doing so can take up to six hours. Peñalosa hopes that streamlining the process will improve that dismal rate while helping Bogotanos feel safer in the capital and more confident that filed reports will be investigated.

He also expects the new platform, which has been inspired by a similar online campaign in Medellín, to encourage more people to anonymously submit tips that will assist law enforcement fight drug dealing, corruption, extortion, and other major crimes. Depending upon the nature of the report, it will be handled by the police, attorney general, or local administration. “We are using technology to its fullest,” said Peñalosa.

While the primary goal is allowing people to report serious threats to the public order, the mobile app will also operate much like the 311 model in New York. Anyone can notify the city about potholes, broken stoplights, improper garbage collection, or various other matters.

Logging the issues will in theory help officials address them more efficiently and contribute to the city’s push to maintain better digital records. For transparency, all submitted reports will also be assigned a record number, so that users can track the progress — or lack thereof.

In addition to launching the SeguridadEnLinea.com website and free Seguridad en Linea app, which can be downloaded through Apple’s App Store or Google Play for Android, the administration is putting computers in 15 judicial houses throughout Bogotá. Anyone can use these to file a crime or complaint.