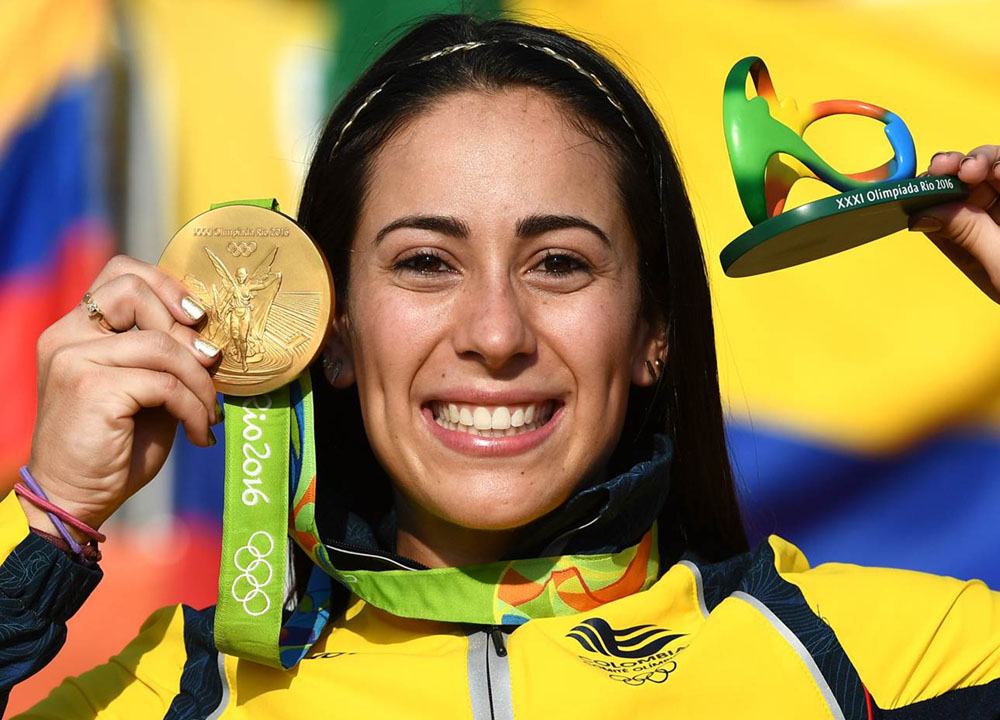 Mariana Pajón didn’t just win. She dominated the competition, winning all three semifinal heats with ease then doing the same against the world’s best BMX riders in the final. The distance between her and everyone else made the 24-year-old champion look like Usain Bolt on a bike.

It was her second straight Olympic victory in the event, making Pajón the first Colombian with two gold medals. After climbing to the highest spot on the podium — again — and singing along to her country’s national anthem — again — she had a message for her nation: “This medal is for all of you.”

The Medellín-born Reina de BMX made history for both for herself and Colombia. Her’s was the third gold medal of the games for a nation that had only claimed two in its history entering the Rio Olympics. Along with triple-jump savant Caterine Ibargúen and weightlifting inspiration Óscar Figueroa, she had helped the country bring home more gold from Rio than it had in the previous 19 Olympics combined.

Ibarguen was just as magnificent. Her best jump of 15.17 meters (49.8 feet) beat silver winner Yulimar Rojas of Venezuela by 19 centimeters (7.5 inches). Nobody else even finished within 43 centimeters (16.9 inches). By her final attempt, there were no athletes left who could outdo her, so Ibargüen was competing only against the world record.

That record has stood since 1995 — at 15.50 meters — and breaking it is all the 32-year-old now has left to accomplish in the sport. Despite Brazil likely being her final Olympics, she plans to keep competing internationally with her eyes on that distance, training to improve her career best of 15.31 (which is already the fifth-longest women’s triple jump ever). Anyone who watched her take over the event on that Rio track — the whole time flashing her dazzling smile — has to think she has a good shot.

In not just winning but dominating their competitors, Pajón and Ibargüen proved that Colombia is entering a new day in its Olympic relevance. The nation had never sent many true medal contenders to the games, but that has begun to change.

Colombia won eight medals, including Pajón’s gold, in the 2012 Olympics in London and matched that count in Brazil. Among Latin American and Caribbean nations, only Brazil (19 medals), Jamaica (11), and Cuba (11) won more. Colombia finished way ahead of regional rivals Mexico (5), Argentina (4), Venezuela (3), Ecuador (0), and Chile (0).

And while Colombia’s three golds by three great competitors dominated the headlines, it was the volume of contenders that makes Rio stand out. Overall, Colombia sent 147 athletes to Rio, the largest delegation of athletes in the nation’s history. The country also sent a record 104 to London, which was a massive jump from the then-record 67 sent to Beijing in 2008.

Pajón said her second gold was even more special since she won it in South America in front of so many of her compatriots who made the journey to Brazil. No doubt the scores of other less-heralded Colombians who came up short in competition felt the same.

By all measures, Rio was the best Olympics in the nation’s history. And if the same trajectory holds over the next few games — more competitors, more golds — then it may not be long before Colombia is finishing in the top 10 of the medal count.