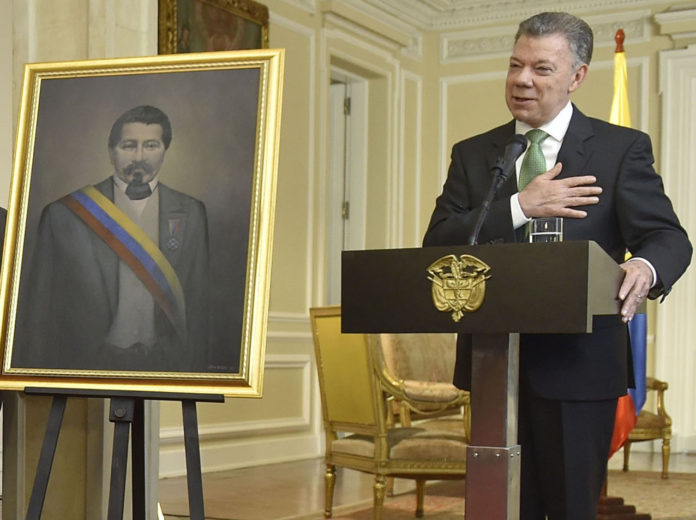 It took renowned journalist Gonzalo Guillén more than a decade, and a lot of red tape, to fulfill the promise he made to his friend and father of Colombian Sociology Orlando Fals Borda to secure Juan José Nieto Gil, the country’s only black president, to his rightful place in history and in the halls of the Nariño Presidential Palace.

“I dedicated the last years of my life to fight for Nieto’s rights, because Fals Borda, at the time a very old man, just before his death, asked me to. He said, with an air of irony, ‘here, I leave you this small task,'” remembers Guillén. “When Obama won his first Presidency, I thought the time was right.”

He first brought attention to the issue by writing: “Obama was not the first black president of the Americas. The title rightfully belongs to Juan José Nieto Gil.”

One of President Juan Manuel Santos’ last public duties before leaving office this month was the unveiling of a replica of the portrait of President Nieto Gil by artist Justiniano Durán. The original painting, from the 19th century, remains in the Inquisition Palace in Cartagena, which also holds the historical archives of the city. Supporters of Nieto Gil refused to hand over the original to Bogotá.

“No one wanted the original painting. It was found in a basement, piled up with junk and rotting,” recounts Guillén. In fact, before ending up in the dungeon of the Inquisition Palace, Nieto Gil’s portrait was whitened in Europe to conceal the fact that he was black, and his name was erased from history. Referring to the replica, he remarked: “It is an invented Nieto Gil, he is no longer white, but blue.”

Nieto Gil (1865-1866) was appointed President of Colombia for only six months of the United States of New Granada (as Colombia was called), from January 25 to July 18, 1861, at a time of deep political divisions. He fulfilled the power vacuum between the government of conservative Mariano Ospina Rodríguez and the second mandate of the liberal general Tomás Cipriano de Mosquera.

Nieto Gil was born in Sibarco, a small town in the department of Atlántico, which in the 19th century formed part of greater Bolívar. He was the first novelist of a newly established Republic with several works to his authorship, including the 1839 Geography of the Province of Cartagena. To honor his race, Nieto also pushed for the abolition of slavery among his pro-Republic compatriots, and declared Bolívar free of slavery.

The issue surrounding Nieto Gil’s presidential omission wasn’t based on a political agenda, but race. Born into a family of African descent, the leader was whitewashed by history when upon his death, in 1866, a portrait of him was adulterated by an artist in Paris to change the color of his skin. Upon its return to Cartagena, the portrait hung in the Museo Histórico de Cartagena but was withdrawn in 1974 to undergo restoration. During this process, the original pigmentation resurfaced, and while for the white Cartagena elites Nieto Gil was considered a “mulato” – racially, he was black.

The restored image, however, did not sit well with some academics in Cartagena who claimed the portrait depicted a 19th-century costeño General, even though Nieto Gil brandishes the presidential sash.

As a part of a seminal work titled Historia Doble de la Costa (Double History of the Coast), Orlando Fals Borda (1925-2008) began piecing together the episode surrounding the painting and discovered it rotting among a pile of old papers and furniture in a Cartagena dungeon.

In 2008, an exhaustive investigation by Guillén confirmed Nieto Gil’s birthright as the country’s 42nd president, based on the list that dates back to the United Provinces of New Granada (1811-1816).

Guillén presented a petition before the office of the President to include Nieto Gil in the heads of state list four years ago. The Presidential office, in turn, appointed the Instituto Colombiano de Antropología e Historia, ICANH, in charge of protecting the historical patrimony of the country, to study the claim. Santos granted Nieto Gil his rightful place in history, and communicated the good news to Guillén, by sending a copy of the study that proved him right.

Guillén donated the study to the Masons in Cartagena, as Nieto Gil was a member himself. The lodge now carries the name of the black president. “Pedro de Heredia who was an assassin and a slave trader has a statue to his name. Instead, Juan José Nieto, a true liberal, and dignitary has none, instead, his tomb is abandoned.”

On August 2, Colombia’s 116th President (based on the list that starts with La Gran Colombia 1819-1831), Juan Manuel Santos received the restored painting of Nieto Gil into the presidential palace.

“We were delayed, but here it is,” remarked Santos during a ceremony in which he was accompanied by representatives of Colombia’s Afro community, including Lázaro Escalante, mayor of Baranoa and Environment Minister Luis Gilberto Molina.

Guillén was not invited to the ceremony, although it was he who worked in favor of Nieto Gil’s recognition. “I don’t care if I wasn’t invited, because what truly interests me is that the painting is hanging on the palace’s walls, and no one can deny me the credit,” he stated.

The journalist believes he was ignored because he directed the documentary Operation checkmate: not a masterstroke (Operación Jaque: unajugada no maestra), which reports on the details surrounding the tactical maneuver to free presidential candidate Ingrid Betancourt and three American birdwatchers from FARC, while Santos was Minister of Defense during Alvaro Uribe’s presidency.

“I think it’s because of that because I made the documentary showing Operation Checkmate was a farce to steal US$100 million dollars,” he claims.

While Guillén’s initiative has been ignored in Nieto Gil’s historic recognition as the only black president this country has had, the painting now rightfully hangs on the walls of the Presidential Palace. Although the portrait was supposed to accompany other dignitaries, as a leader slighted by history, there isn’t enough room for him, yet.

In the meantime, the novelist, geographer, and abolitionist is being displayed in one of the palace’s main salons where visitors are received.