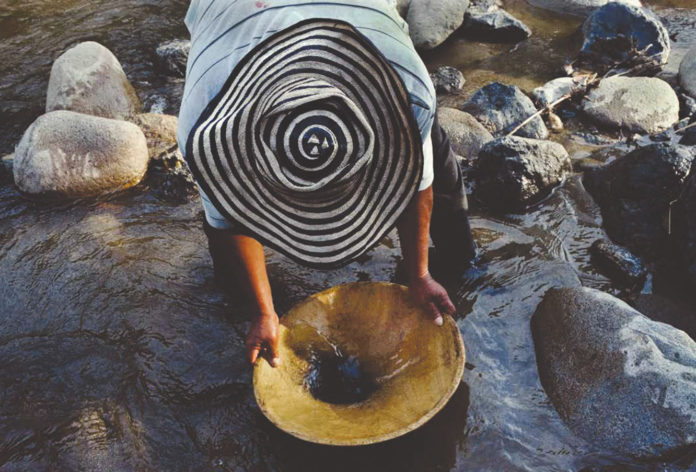 Photojournalist Stephen Ferry joined forces with his sister Elizabeth Ferry, to release an important visual document of small- scale gold mining in Colombia. In 200 pages, La Batea introduces the reader to how gold has played a central role in this country’s history, from being a sacred ore of the pre-Columbian Quimbaya, Tayrona and Muisca peoples to the conquest by the Spanish, the genocide of indigenous groups which followed, and growth of a slave trade.

Illegal gold mining is a scourge of many developing nations, including Colombia. Given turbulent economic times around the world, the price of gold continues to rise, attracting even more illegal miners to search for this precious mineral. In many regions of Colombia, gold mining has resulted in widespread devastation to rainforests and threatened the natural habitats of species, especially the already endangered jaguar. In their hardcover book La Batea, Stephen and Elizabeth cover terrain, capturing in color and black and white images the hard life of Colombian miners, as they dig, pan and scrape the rock face with rudimentary tools. Many of Colombia’s gold mines are located in conflict zones or in the hands of criminal groups, mainly the National Liberation Army (ELN) guerrilla and Gulf Clan drug syndicate.

Communities scattered across Colombia’s Pacific coastline survive on an illegal gold economy with small-scale operations attracting migrant workers from across the country. Unsafe working conditions, extortion by criminal groups, and poisoning of rivers and streams with mercury has exacerbated a humanitarian and environmental catastrophe – all in a country that is slowly emerging from more than a half-century of internal conflict.

La Batea isn’t a political tract nor does it pass judgement on the devastation caused by illegal gold mining. Short personal accounts of the mines visited, including two of Colombia’s largest mines – Frontino and Marmato – reveal a human connection between the journalists and the subject. Both Stephen and Elizabeth are no strangers to documenting the daily life of some of Colombia’s most vulnerable.

Chocó is one of Colombia’s most resource rich departments, but also, one of its most impoverished. Home to a majority Afro-Colombian population and descendants of African slaves who were forced to mine for gold centuries ago, 80% of the rural population lacks access to the most essential services – from basic housing to clean water, education and health facilities. With a large majority of the Chocó’s population living beneath the poverty line, illegal gold mining is now generating greater profits than the entire drug trafficking trade, according to the United Nations 2017 World Drug Report.

As a photojournalist, Stephen Ferry has covered international assignments for leading U.S publications including National Geographic and The New York Times. Ferry’s versatile use of traditional film gives La Batea a grainy, realistic editorial feel and is complemented by Elizabeth’s honest testimonies. The book is available in all Spanish bookstores and the English version is available at the photography gallery OjoRojo (Cra 5 26C-62), as well as through the website of Icono Editorial.

Tiempo de Juego: The life changer that begins with a game