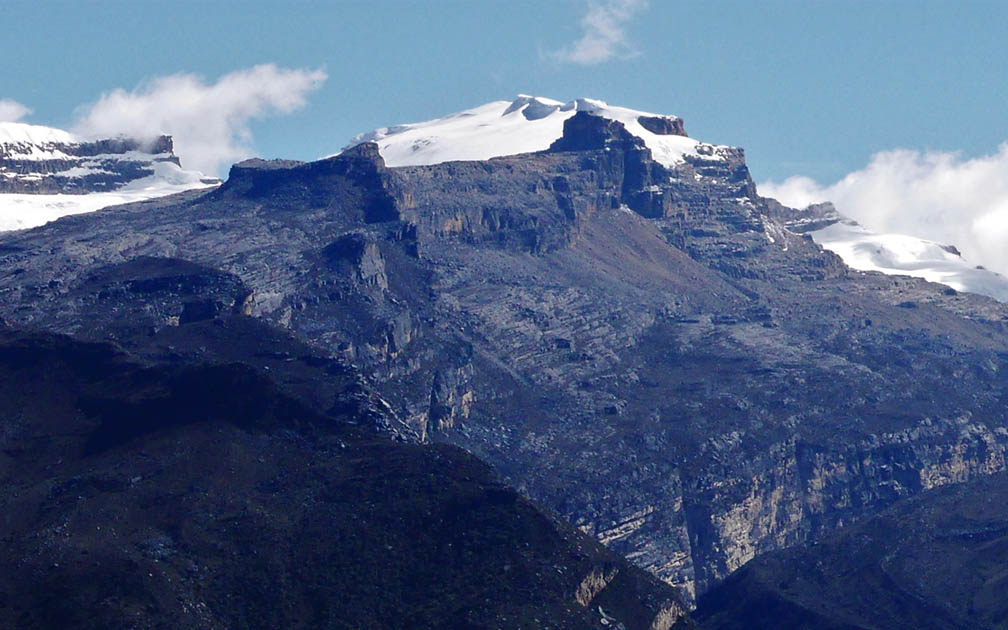 Hiking up to the flanks of the El Cocuy mountain range is a breath-taking experience thanks to the lack of oxygen (I am over 4,000 metres above sea level), but also the spiritual high of being before the magnificent peaks cloaked in Colombia’s highest and widest glacier.

Dotted over these wrinkled upland are incredible weathered rock formations, some half-buried in 16-square kilometers of white glacier, with a backdrop of rugged cliffs, turquoise lakes and gorges with rushing rivers. Rising above are 13 snow-capped peaks over 5,000 meters. The deeper valleys and lower slopes are a riot of native Andean flora; frailejones, bamboo, thick moss and trees draped in epiphytes and old- mans-beard. With reason this national park hosts some of the planet’s most beautiful treks and is a magnet for hikers and climbers from Colombia and around the world.

But all is not well in La Sierra Nevada de El Cocuy, Guicán and Chita, to give it its full title. After protests and blockades the site has been closed to tourists for almost a year, driving a wedge between communities who rely on tourism in this remote area, and interests who would rather see the mountains untouched.

Bizarrely enough the park’s closure was sparked by a football match, or not even that, just a kick-around of a football between climbers on one of El Cocuy’s glaciers as part of a stunt for a TV fund-raising event in February 2016. But this mountain match was a massive own goal: a 90-second video posted on Youtube caused massive indignation among some campesinos who blockaded the access roads claiming ‘disrespect for the mountains.’ “It’s like someone comes into your living room, breaks something, and just leaves,” said a local official backing the blockade.

So, someone kicking a snowy football causes a world-class tourist attraction to close? “Only in Colombia” I can hear you thinking. But of course there is much more to the story than meets the eye. The football is only the tip of the iceberg.

The story does not come easily. In the small town of El Cocuy, which is the main base for tourism in the area, I begin to ask locals “why is the park closed?”.

“It’s the indios! They want the whole mountain to themselves,” says a shopkeeper, referring to the U’wa indigenous communities who inhabit the eastern slopes and who joined the blockade soon after it started. This ignores the fact that the blockade was first imposed by local campesino communities closer to El Cocuy and who first dug up the roads in.

“Envy,” suggests the woman selling hotdogs. “Some families are making good money from tourists and the rest are jealous. But it’s crazy because down the line everyone benefits from visitors, without them we are a ghost town.” On that she seems correct. Many of the restaurants are closed (which is why I am buying a hotdog).

“The ELN are behind it all,” claims a man in the park, referring to the Marxist guerrillas that dominate the Llanos plains to our east. The ELN have political influence in the local towns and like to present themselves as eco-warriors, but more likely, just want hikers and mountaineers to stay away from using mountains which they use as a hide-out and corridor for guns and drugs, connecting as they do the Venezuelan border with the interior of Colombia. This ELN influence is one reason people are reluctant to talk. “People with a strong opinion tend to get shut up,” says my contact, drawing a finger across his throat.

I press on with my questions. “People walking on the mountain are making the glaciers melt, so we must close the park to protect them,” says another. I hear this opinion several times, and it chimes with the claims of the U’wa people, who see themselves as the guardians of the sacred glaciers, and that human intervention is the destroying their natural world.

The U’wa, some 7,000, are on the lower western slopes of the range and far from El Cocuy town, but their protest is far-reaching. This is the tribe that has for decades battled against predatory oil and gas extraction on their territory, and were briefly a world-wide news item in 1997 when they threatened mass suicide by jumping off a cliff if Occidental Petroleum continued drilling. The U’wa leaders took their cause to the U.S., picketing an Occidental shareholder meeting and raising awareness of their communities’ mistreatment – beating, rapes and murders – by Colombian state troops sent to quell their protests.

In that battle, the U’wa prevailed, and because a cause célebre among environmentalists, but the war was far from won. According to the Centre for World Indigenous Studies (CWIS), the U’wa are still constantly resisting oil company exploration. Added to this is the general abandonment by the state in areas such as health, and incursions of their lands by armed groups such as the ELN.

As with many indigenous groups in Colombia, the U’wa’s relationship with the guerrillas is complex. While often sharing the same space (remote regions) and a similar goal (to resist the state) the native people are frequently themselves the victims of guerrilla aggression.

Others, such as some tourism cooperatives campaigning to reopen the park, see the U’wa themselves as the aggressors using the protest to lever more land inside National Park (which legally only overlaps with a small section of U’wa territory). Some argue that the U’wa, with their crops and grazing, are more of a threat to the fragile páramo ecosystems than the tourists, and are using the park closure as a chip in other disputes over mineral resources.

No-one disputes the glaciers are melting. Studies by IDEAM, the climate bureau of Colombia, have compared historic paintings of the glaciers with modern data that suggest a staggering 90% decline in ice cover between 1851 and today. According to the World Glacier Monitoring Service in Zurich, the Andean tropical glaciers below 5,500 meters “are really endangered and probably only have a couple of decades left.”

Of course this has little to do with people hiking in the mountains, but rather down to climate change in the form of global warming since the industrial revolution, and reduced cloud cover on the mountains. Perhaps then the U’wa’s fight with the oil companies is more pertinent than their cause to close the park to tourists.

The U’wa insist that lack of sanitation for visitors is an environmental hazard. With few facilities such as adequate toilets, water courses are polluted and according to the CWIS the U’wa link this to a rise in parasitic diseases their communities suffer downstream. For them the rivers are dirty and at risk of drying up, added to which the glaciers are Zuzuma, the sacred place where their gods reside, and on which kicking a football around is the ultimate disrespect.

Everyone agrees the park is poorly managed in terms of visitors’ facilities, a problem that in theory should be easily overcome considering the park sees just 20,000 visitors a year (the same that arrives every two days at Machu Picchu in Peru). Anyone who knows Colombia also knows that toilets are in short supply everywhere, not just on mountain tops.

For its part, the National Parks authority says it has taken measures in recent years to protect the park, such as in 2013 when horses were banned, the number of park rangers increased, hiking and climbing areas restricted and entry fees raised. Lack of toilets and rubbish disposal remains an issue, according to protesters, though their main concern remains fixated on human presence melting the ice.

So it is fair to say the problems have been rumbling on for many years. And when the lockdown came in early 2016, many people thought it would blow over in time for the Easter tourism rush. But no, instead the National Parks found themselves locked out by the blockaders who blamed the authority for mismanagement and “the huge damage done to the sierra by visitors.”

After some fraught negotiations the park staff did regain access to the area, but on the condition that it remained closed to tourists while an environmental impact assessment is done. This is despite a clear statement from the Parks director that in their opinion ecotourism was not the main threat to the sierra. Hikers only visit a small sector of the 3,000 square kilometer protected area, said the director. Much more of a threat is the encroachment of grazing, farming and clearing trees.

Six months after that there is still no sign of a final decision. I am standing on the very edge of the park, chatting to a former farmer who has reintroduced native trees and bushes to his finca and has constructed cabins and a kitchen for visiting hikers.

“I fought with my father to persuade him to take the livestock off the land and bring back the wilderness,” he says, showing me where he has been planting frailejones and other native plants in land formerly grazed by sheep. But now with the park closed, few visitors come this way and the cabins are mostly empty. “We have worked to bring ecotourism here, but for what?”. His frustration is palpable.

He recounts the history of the surrounding land as we ride up to a viewpoint at Altos de La Cueva, and points out the remains of trenches dug by guerrilla fighters being bombed during the pitched battles of the 1990s. Further down the hill are the caves where families hid from death squads during La Violencia, when the Liberals and Conservative supporters made war. It seems remarkable that such a peaceful place, surrounded by such magnificent scenery, has such a bloody past.

Can calm now come to the mountains? With an ELN peace process taking shape, the area should become safer. But will this make way for a compromise between the U’wa, tour companies and campesinos? Can conservation be balanced with development? Will hikers be back on the trails?

Some commentators see El Cocuy as a test of a new Colombia: a strong but benign state able to bring harmony between polarised interests for the benefit of all. For me, El Cocuy is a wonderful place even without the right to scale the glaciers. The friendly towns, verdant countryside and magnificent views make the journey worthwhile. But while the park remains closed – and a small shadow of conflict hangs over the hills – a large proportion of visitors will stay away.

The day I leave the area, a public meeting has been planned. Some compromises are being proposed, such as severe restrictions on opening times – just a few weeks a year during peak holidays – which will make the park the preserve of a few wealthy visitors. Few are happy with that idea.

“Yet another meeting,” says a woman working at a hotel. Bookings have dropped 80% and the town of El Cocuy is losing an estimated $500-million pesos a month in visitor spending, with 16 other towns across the region also affected. “That’s all they do, talk, talk, talk, but nothing gets fixed,” says the hotel worker. “When will we get our mountains back?”

I you like Steve Hide’s stories, visit his blog: www.travelswithmitzi.blogspot.com

Conservationists attempt to save Colombia’s magnolia tree from extinction