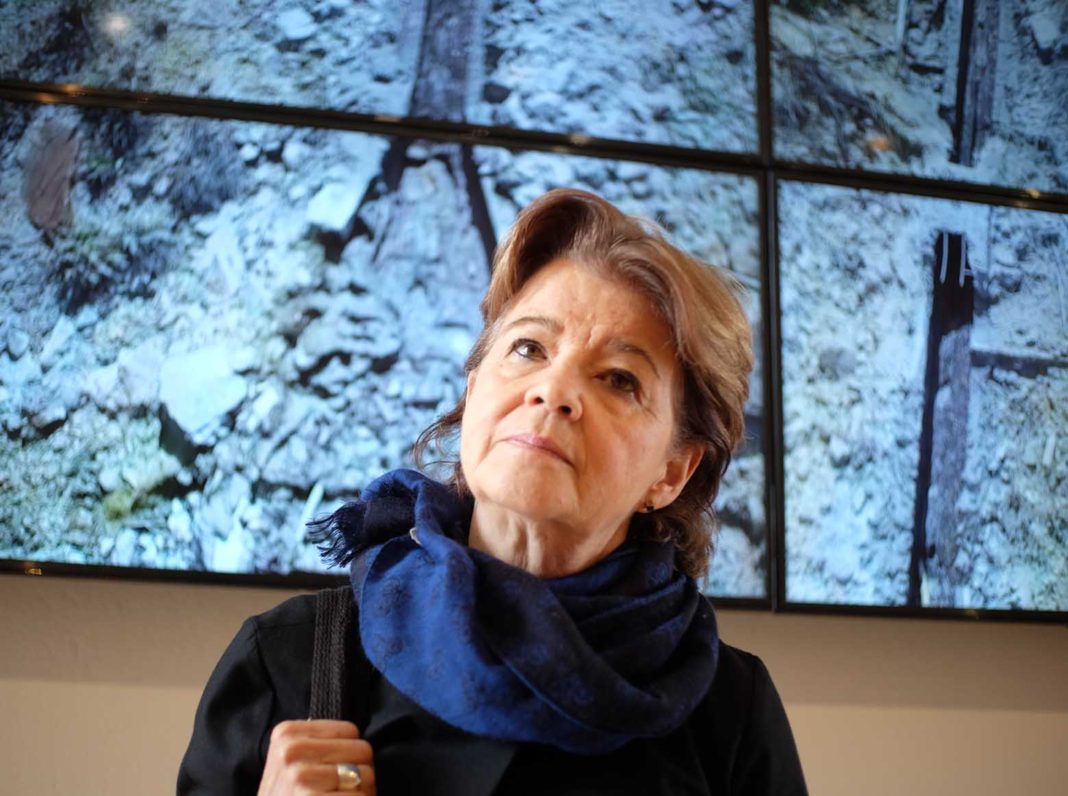 Having started her career as a painter and sculptor, Clemencia Echeverri (Salamina, 1950) found in video and sound installations a medium to evoke powerful responses with audiences. From carefully edited scripts to montages that tribute the victims of violence in Colombia, the artist’s monumental installations are as much about the medium, as they are luminous confessionals for reconciliation.

The Canadian communications theorist Marshall McLuhan’s most famous aphorism “the medium is the message’” is one of many subtexts embodied in the works of multi-faceted, multi-dimensional artist Clemencia Echeverri. Entering into dark rooms where wall-to-wall video installations create a near monastic experience with viewers, Echeverri’s use of technology canvasses are the result of years of research, concise editing and image overlapping. The brute force of nature and faceless sentinels of her native country’s armed conflict are some of the disturbing narratives she constructs with her camera and acute journalistic investigation. The artist’s aim, as art critic Stephen Zepke writes, is “neither documentary nor discursive,” instead “the exploration of emotional complexities of the conflict in Colombia.”

While McLuhan believed electronic media would result in mankind’s “alienation from other senses,”  Echeverri’s sonorous and visual incantations are layered in personal, everyday experiences, and mise-en-scene of a collective search for redemption. With a backdrop of warped soundtracks, fleeting images of hooded assailants and frenzied cattle before slaughter, The City Paper spoke with the artist about “Liminal” and other video projects that thrust audiences to the frontline of unseen realities. The exhibition is curated by art historian María Margarita Malagón.

The City Paper (TCP): Clemencia, could you explain the meaning of Liminal as the title for the retrospective?

Clemencia Echeverri (CE): It’s about limits. Borders. An undefined place or point, where one stands in front of a work while, at the same time, the work contains a sense of the “liminal.” The exhibition isn’t linear because there are no open nor closed narratives. These spaces between images and sounds make us reflect on what we are seeing and, ultimately, who we are. Even though there are palpable sensations, we can’t necessarily pinpoint them, and these sensations also situate spectators on a threshold of what is happening around them.

TCP: Your work is layered in critique, in every sense of the word. How do you respond to being labeled a political artist?

CE: It’s a stance against what is happening. I take a stance against resistance, certain moments and ensuing crises. I don’t accept certain societal conducts, from inequality to the abandonment of nature. Confronting the barbarity of the internal conflict is also a stance. These moments in our history move me, as well as all that is emotive and affective.

TCP: What made you transition to video as an artistic medium, after starting your career with a degree in Fine Arts and Communications and a Masters in Sculpture from the Chelsea College of Arts and Design, London?

CE: Everything happens because of circumstances. I felt I needed to bring to the studio events that don’t happen at one time, but happen within time. The notion that events do not follow a recurring pattern is inherent in my works. The video camera and photography became tools by which I could respond to the uncomfortable realities, among them, the internal conflict permeating society on all fronts.

TCP: In one of the largest rooms of this exhibition is the 2011 work Versión Libre (Loose Interpretation), in which anonymous figures in slow motion accompany the testimonies of masked combatants. What does this work tell us about the internal conflict?

CE: We have to be conscious of what is happening around us. It raises questions of identity, ethics and aesthetics. As artists, we want to preserve the memory of the nation, but in Versión Libre there is ambiguity regarding the testimonies of demobilized guerrilla and paramilitary combatants. I created this work for the Luis Caballero Prize, and spend time in Medellín hearing intensely emotional discourses. The black balaclavas immediately make audiences strike a connection with what is “evil” or an “enemy” in civilian society. The darkness of the exhibition rooms is one of our own interpretation. As the shadowy figures emerge, we don’t know who is who. In this confusion, it is hard to distinguish between what we believe to be true or what are lies.

TCP: Another powerful work in this 20-year timeline is Río por Asalto (River by Assault) projected on six screens depicting the wrath of nature.

CE: Each screen represents a different process of the rivers Cauca and Magdalena. It’s also an act of provocation caused by human intervention. I captured these sequences as I journeyed along both rivers to document the rebellious spirit of their waters. On one of the screens, viewers see how the security latch at Hidroituango Damn ruptures. But, the rivers find their final destination at the sea, reclaiming what is theirs. There’s a tug-of-war between nature and human elements such as waste, destruction, deforestation. The river is ultimately triumphant when something tries to retain it.

TCP: Your audio-video installations require space to reach audiences. How is the process of creating a project before knowing where it will be screened?

CE: Each work finds its space. I created Río por Asalto for the Shanghai Biennale, and I try not to limit myself to preconceived notions of space. In truth, I don’t restrain myself. The separation of sound and image through careful editing immerses audiences in the installation. Many of my earlier works were created for the Alonso Garcés Gallery. In as much as the images carry the exhibit, so too each soundtrack. Equal importance is given to the sound-image relationship.

TCP: Art critics have referred to you as a pioneer of the audiovisual genre in Colombia, with a trajectory that encompasses 20 years. How do you interpret their appreciation?

CE: I don’t consider myself a pioneer, as this label doesn’t do justice to so many others in the artistic field. However, the rooms where the works are being projected reveal what was going on in my mind at different moments in my career, and seem to have a conversation among themselves. There’s a timeline, of course, but never intentional.

TCP: In a more recent video sequence, Supervivencias (Survivals), there’s a subtext of the precarity of existence through the lens of a remote village in an idyllic setting.

CE: In Supervivencias we only know that towns exist because of their lights. There’s rhythm, as what appears to be distant, approaches with the lens and sound of feet marching through a tropical rainforest. There is tension and strain in each frame. What begins with a series of flickering gules of light becomes a homestead and narrative of encroaching fear. The movement of rubber boots evokes an invasionary force. The house is a shelter in the darkness of night. It can fend for its own as a protagonist in an ensuing fight for survival. The abandoned country house is a metaphor that responds to questions such as: “Why was it abandoned?” “What took place there?” The answers to these questions are rooted in rural Colombia, terrorized by faceless combatants.

TCP: Juegos de Herencia was recorded in 2009 in a remote community of Colombia’s Pacific coast. In this installation, viewers witness the beheading of a rooster by blindfolded youngsters. Besides an overt condemnation of cruelty, what does this installation say about our understanding of rituals?

CE: I was outraged by my feelings of helplessness when I attended the Fiesta del Gallo in El Valle (Chocó), a community where a rooster is beheaded with a machete. This fiesta is a community event that not only ends with the death of the animal but represents the resistance of a creature buried to its neck in sand. Viewers must ultimately make their own conclusions if the act of killing is a celebration or a ritual. The lack of respect for life is symptomatic of a general acceptance of animal cruelty as a spectacle. By using raw footage and projecting the instruments of decapitation, the artwork generates a moving sensation more authentic than social commentary.

TCP: As a foreigner who comes to see Liminal, the projected images are a visceral journey to the heart of the Colombian condition. For viewers unfamiliar with the internal conflict – and now post-conflict – Colombian society appears to be inherently violent.

CE: Colombian society is not inherently violent. What is violent is societal abandonment, lack of education, multiplying-effects of aggression that begin between a father and son, husband and wife. Survival is aggressive. This is also one of the messages from the masked combatants. Art is another language to express what many of us already know, or have heard from different sources. The language of art is also one that must generate solidarity, compassion. I don’t consider my work to be a condemnation of civil society, but rather an exploration of the painful emotions that stem from violence. 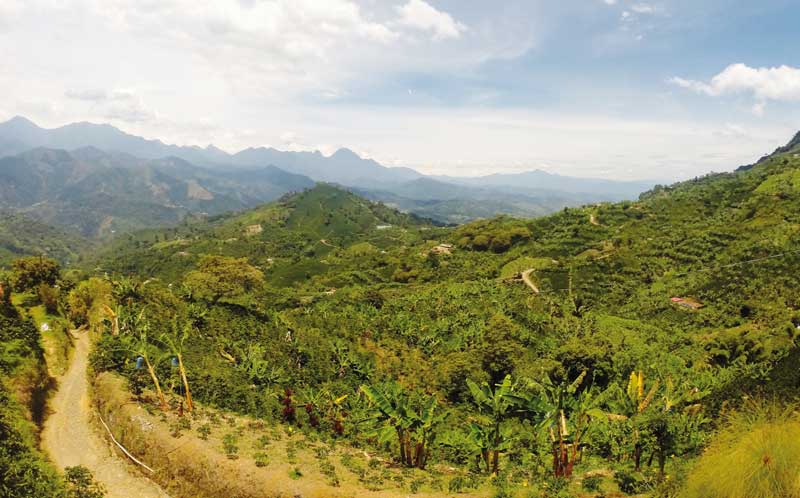