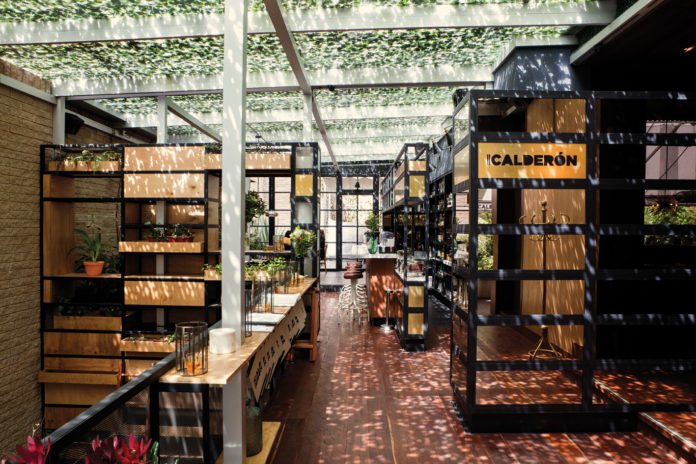 Calderón is the kind of host that brings a pitcher of ice-cold refajo when you sit down at the table. When the missus is away, he takes care of the kitchen, offering his guests a braised lamb shank or pot roast. Calderóns, however, are sadly few and far between these days, given our fast paced urban lifestyle. Yet, for Bogotanos who were raised on genteel hospitality and sumptuous food at the dinner table, a namesake that tributes the Calderón’s penchant for hospitality opened its doors late last year in front of a quiet park in Cabrera neighbourhood.

The décor sets a familiar tone drawing on 1970s influences, such as ambient mood lighting emanating from a brass ceiling lamp, striped wallpaper and a blue banquette circumnavigating two walls of the main dining room. As we pull up a seat at a wooden table in a corner, settling into what becomes an extended lunch on a balmy Saturday afternoon, chef Tómas Rueda makes his rounds as the “Calderón” of the house. Clients navigate the menu, and Rueda explains the thought process behind a bold approach to “criollo comfort food.”

At the helm of two of Bogotá’s best restaurants – Tabúla and Donostia – Rueda was one of few chefs selected to be featured on globe trotter Anthony Bourdain’s Colombia episode, for his commitment to sustainable agricultural practices and creative technique. “When I opened Calderón, my lead chef Ronald Orujela began scolding me every time I got near the stove to fiddle with the temperature,” laughs Rueda as the first plates of the opening section of the menu called ‘Mientras Esperas’ are selected.

As we are a small group of clients, Calderón stays the course with the sharing philosophy of Tabulá. Three starters are chosen from ‘While You Wait’, a first introduction to this restaurant’s culinary objective – put the spark back into dishes that are centrepieces of the Colombian homestead, but which with the passing of time, and in the hands of the untrained, have been downgraded to uninteresting.

During a quarter of a century in this country, I cannot remember the last time I tried lengua (tongue) or a jellied bone marrow – tuétano. As this capital’s most daring culinary undertaking, Calderón’s grilled tongue in a hot cast iron skillet of cherry tomatoes, capers and herbs was an experience that gave us plenty to talk about at the table. Equally jaw-dropping, baked bone marrow with encrusted garlic garnished with parsley. In keeping with Calderón’s artisan approach to food, a wood platter of sliced chicken liver paté was enjoyed with a bottle of Tempranillo.

With a canonical understanding of Colombian recipes, Rueda doesn’t improvise; instead, if you didn’t know these dishes as very Colombian, they could be served at any table in a five star restaurant in the world. “All food can be considered international,” states Rueda on the influence globalization exerts on all aspect of our lives – from what we wear, to what we eat. “So, why not Colombian?”

An example of breaking paradigms is Calderón’s asado de tira – broiled short ribs with a potato broth, cilantro and diced onion. Now, you would be right to associate this dish with an honest Colombian breakfast staple caldo de costilla, but Rueda deconstructs this dish so that the full flavour of the meat can manifest itself, and the broth, becomes a ceremonial side for dipping.

In every dish there’s a sense of ritual and tradition. As the wine flows, a star of Calderón turns up at the table: the oven-fired beef roast with toasted garlic. Cooked to perfection and accompanied with a cheese gratin, at this restaurant the side dishes are as much protagonists as the protein, melding with trimmings and gravy.

When Tómas sets his sights on a culinary adventure there is always an element of risk, but as experience proves, his hands-on philosophy has plenty of followers, and understandably so, for Calderón is as much a revelation as it is a celebration.

Restaurants in Bogotá often miss the mark when it comes to striking that fine balance between price and quality. But you can rest assured that at Calderón, the balance is respected, for as any gracious host knows, dining with friends is akin to being with family. With partners Paula Valencia and Daniela Mazzilli, ´Tómas Rueda has embarked on a quixotic quest to reclaim Colombia’s endangered culinary traditions. At Calderón, food returns to its rightful place – the center of experience and memory.