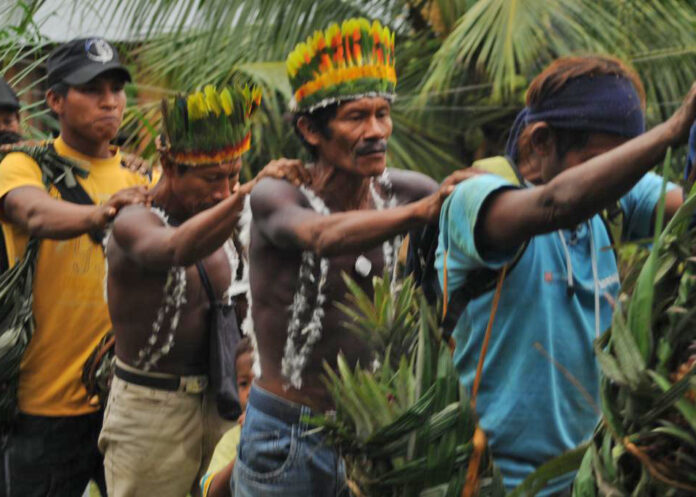 The dances can last hours, men clutched shoulder-to-shoulder and moving to the sounds of percussion and chants. The traditional dances of the indigenous peoples of La Chorrera, Amazonas, are unique to the indigenous communities of the Uitoto, Mɨnɨka, Bora, Okaina, and Muinane peoples, and celebration that announces the arrival of a harvest, inauguration of a round house (maloca), appointment of Elders, the end of a conflict, or sealing an alliance among tribesmen.

Like many other of Colombia’s ancestral expressions inscribed in UNESCO’s Intangible List of Cultural Heritage of Humanity, including the traditional knowledge of the Jaguar Shamans of Yuruparí, Vaupés, or the Wayüu’s legislative system applied by Word Guardians (Palabreros), the traditional dances of La Chorrera have been nominated for Intangible Patrimony of the Nation.

The nomination was proposed by the National Council of Cultural Heritage (CNPC), and received technical support from the Ministry of Culture and Amazonian Institute of Scientific Research (SINCHI). “It is essential to guarantee the transmission, safeguarding of practices and permanence in time of this cultural manifestation, fundamental for the survival of these communities,” affirmed Minister of Culture Angélica Mayolo.

The next step in the process involves the elaboration of a Special Safeguarding Plan to be presented to the National Heritage Council, and which serves as the framework for this group of tradition-bearers to be recognized by international aid and non-profit organizations, including the United Nations.