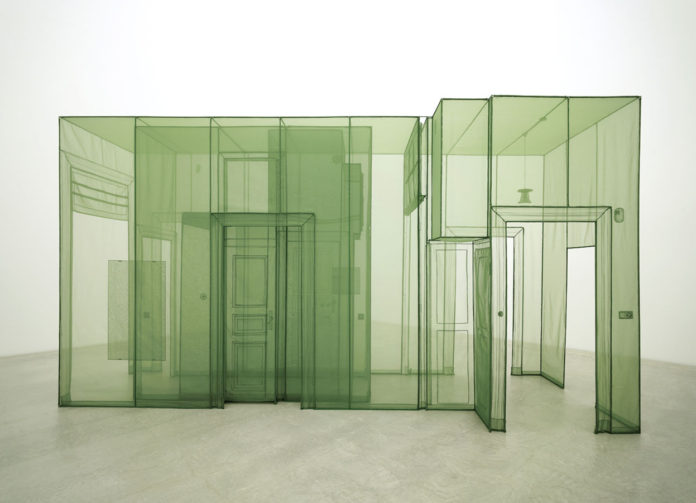 “Between Spaces” (Entre Espacios) is the title for the most recent exhibition at NC-arte Gallery and the first solo exhibition in Colombia by the Korean artist Do-Ho Suh. Born 1962 in Seoul, Suh’s work is grounded in an appreciation of space and the invisible frontiers that exist within structures.

From his childhood in Korea to his moving to the United States in his late twenties, Suh challenges audiences to en- gage with his large fabric structures, one of which occupies the gallery’s central space. Now based in London, the artist who has been deeply influenced by the concept of migration and the different houses he lived in throughout his life, is now being introduced to Colombians, and an important show curated by Claudia Segura.

The artist’s iconic installations highlight the importance of structures as metaphors of settlement and memory. The son of an abstract painter, Suh earned a Masters in Fine Arts in Oriental Painting from Seoul National University. He then moved to Providence, Rhode Island to attend the School of Design and went on to receive an MFA in Sculpture at Yale University. Suh’s time in America caused a change in his way of thinking and being away from home caused him to reexam- ine what exactly “home” meant to him.

This concept of what makes home a “home” continues to influence this installation artist’s work, and now, from his current base in London. “I want to carry my house with me all the time like a snail,” remarked the artist during an interview with the Contemporary Arts Center in Cincinnati. “I’m interested in transitional spaces rather than destinations. They connect to different spaces, but at the same time they separate the spaces. I truly believe that life is a passageway.”

Art as a rite of passage and the experience of engaging with the large fabric structures is the objective of curator Segura, and the floor space at NC-arte an ideal setting to experience the imaginary threshold Suh conveys in this work. The ephemeral structures are built from translucent polyester fabrics and stainless steel tubing.

The artist has an extensive repertoire of exhibitions, from the National Museum of Modern Art in Seoul, to Moma and Solomon Guggenheim (New York), Tate Modern (London) and Tokyo Museum of Contemporary Art, to name a few. The first survey exhibition of Suh’s work in Europe was presented at the Serpentine Gallery, London, in 2002.The first Colombian exhibition for the artist includes a video installation and Suh’s intimate pen on paper sketches. The exhibition runs until Dec 17, so migrate to La Macarena to take in this landmark show that presents the emotional style of an artist who reaches across boundaries.