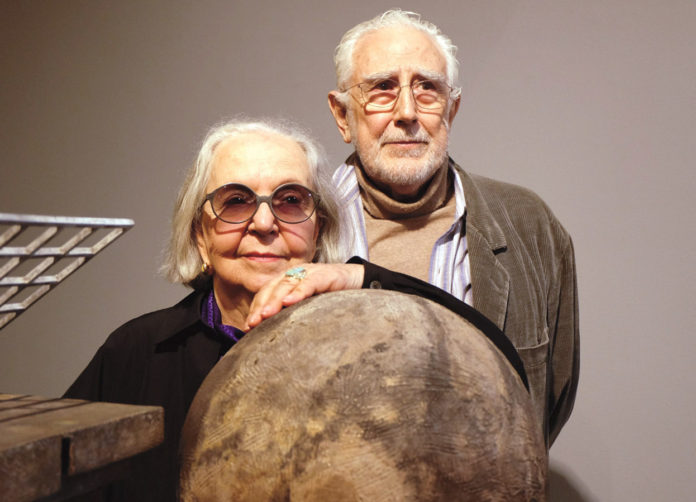 The works of Jim Amaral and Olga de Amaral cover more than a century’s worth of artistic production that began during the mid 1950s when they met as students at Cranbrook Academy of Art in Detroit. “I remember the exact day I met Olga,” recounts Jim, the son of Portuguese immigrants and mother of American-Italian descent. Growing up in the rural community of Pleasanton in northern California, and a place that rings of Norman Rockwell innocence, similarly Olga Ceballos’ early years were spent between a Bogotá household of respectability and the family’s farm in Cundinamarca.

During most of the 1940s Colombia’s reality was rural. The political forces that would unleash one of the most violent periods in this county’s history known as ‘La Violencia’, when the working-class leader Jorge Eliécer Gaitán was assassinated on the streets of Bogotá, ended at the capital’s limits. In the countryside, however, the farmer – campesino– was the guardian of the social fabric.

With upbringings rooted in conservative values and the possibility to “follow their dreams”, the destiny of two art students was forged in the American industrial heartland of Detroit. Jim, who had earned a Bachelor of Arts degree in 1954 from the University of Stanford California, took up Art History and Design at Cranbrook. “I was a terrible student, I couldn’t learn anything,” recounts Jim. But what made the tie and coat culture of the academy worthwhile was spending time with Olga. “She was so special and still is.”

Wedged in a historical moment between the wars of Korea and Vietnam, Jim was drafted in 1955 by the U.S. Naval Construction Battalion “Seabees” to work on an airbase in the Philippines. “I was terrified of war,” recalls Jim of the almost two years he spent with the navy in the Pacific Ocean. “I was out in the jungle.” When he returned to the American West and to an “era of grey flannel suits”, he set his sights on one objective: to visit his sweetheart Olga, who had returned to Colombia, and marry her. In 1957, this country’s artistic duo tied the creative knot. Olga took up weaving commercial textiles, Jim became a carpenter. “We were almost freaks. A married couple like us doesn’t work out very often,” claims Jim. But it did, to the extent that they began to redefine the contemporary artistic landscape of Colombia. “If I had stayed in the States, I couldn’t have done this,” said Jim.

The focus of two landmark retrospectives this year – starting with the Museum of Modern Art’s ‘De la línea al espacio’, and, more recently, an exhibition titled ‘Duo’ at La Cometa gallery, the couple claim that besides the timing being a matter of coincidence, it’s their swan song ending “various chapters in their lives.” According to Jim: “we speak a language other artists don’t understand. Most paint things just to put on a wall.”

Even though Jim and Olga have mastered the understatement, most critics agree that they are two of this country’s most important living artists. Olga’s tapestries are exhibited in the most prestigious museums of the world, including New York’s Museum of Modern Art (MoMa), and Jim’s bronze sculptures have redefined the visual landmarks of the Colombian capital. “It’s important for us to see the physical results of what we have in our minds,” claims Olga. “But, it’s not easy to capture the mind of Jim.”

For these artists, the creative process is what motivates them to keep producing and buck artistic trends inspired by ephemeral concepts and shock value. But, Jim’s erotic illustrations did manage to rattle a self-indulgent artistic elite out of complacency, and his work was shunned, not because of its narrative, but because it was the product of an outsider – the “unsophisticated” gringo, as he explains. Feeling as an emotional hostage in Colombia, Jim retreated as an artist in exile, in the very country that gave him two children, Diego and Andrea, and a workshop in which he could draw and design furniture.

Olga’s hand-woven carpets became very much in demand with Bogotanos, and to own an “Olga de Amaral” was to possess an item of exquisite beauty. As she relinquished the commercial aspect of weaving to create one of a kind works, she emerged as a canonical representative of an art form very much at the heart of pre-Columbian and colonial traditions.

“Besides the spiritual ingredient of going to mass, I was fascinated by the or- nate interiors of churches, where candlelight refracts from gilded altars and inlaid mirrors,” recalls Olga, of how gold became emblematic in her tapestries. From her days as a student of weaving in Cranbrook to being awarded a Guggenheim Fellowship in 1973, Olga de Amaral has been dedicated to the spindle, creating works that emerge as ceremonial shrouds, time pieces, where the past and contemporary are interwoven as delicate fibre, mixed with paint and gesso.

A conventional family environment created the foliage in which their artistic visions could blossom. They took their children on trips overseas to absorb culture and open up creative horizons, beyond an often judgemental and pro- vincial Bogotá, with an artistic elite that was dominated by myopic demi-gods. The first exhibition that made them feel “important” was hosted in 1966 by Miguel Arroyo of the Caracas Museum of Fine Arts. Afterwards, they spent a year in New York City which Jim recalls “eats you alive as an artist.”

In 1970 their sojourns abroad led them to Paris and a “home away from home.” According to Jim, their days in the Saint-Germain-des-Prés neighbourhood resulted in “the most important thing that has ever happened.” He was taken under the wing of art collector Albert Loeb and invited to show at the prestigious Galerie Pierre. A string of exhibitions then followed across Europe.

Working the threads of individuality into each and every work resulted in a life of global recognition for Olga de Amaral, and even though they are both cut from the same cloth, Jim has explored multiple mediums, from guayacán wood to oxidized metal, creating a aesthetic grounded in the mechanical and secretively deviant. “Our force originates from something special,” believes Olga. “We couldn’t be bohemian artists, because we weren’t bohemian.”

Weaving is an intricate part of Colombian heritage, from wool ruanas worn by the campesinos of the Andean highlands to the iconic straw hat of the coast, the sombrero vueltiao. But simplicity in design shouldn’t detract from its functionality, nor undermine the work that goes into every item. For Olga, traditional craftsmanship should enrich popular culture and be a source of inspiration.

The out-pouring of admiration by the museum going public during their most recent exhibitions prove that at the heart of a constantly revolving artistic community, there are bonds cast in iron and stitched laboriously over a lifetime. Even though both artists insist that their work could not exist without Colombia, they have mastered a narrative with such universal appeal, that they stand alone in the history of art.