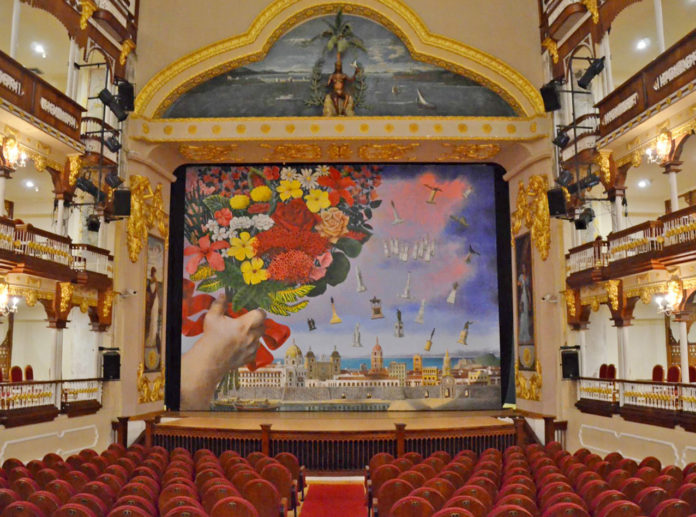 For those who love to read, paradise is a secluded location where there are no people, no noise, no problems – only books and a comfortable sofa. That paradise, dreamed of by many, exists, but not exactly how we imagine though, since there are people, and there is noise in the form of cars and restaurants. Nestled in the Welsh countryside, Hay on Wye is a small market town, that gave birth to a literary giant, Hay Festival. Having turned 30 last year, after an excuse to talk books around a kitchen table, the festival has grown to include several continents, with high profile literary get togethers in Denmark, Mexico, Spain and Peru. When Hay Festival set its sight on Colombia 13-year ago, it took Cartagena in a word storm.

Now, the fact that the name of the Welsh town is “Hay” is also fantastic for those of us who speak Spanish, since “hay” in our language, means something “that exists” – so when we hear “Hay Festival,” our brains understand: There is a festival.

Starting January 25, the colonial port city will host 150 writers and intellectuals for yet another season of talks, book signings, large conferences, live entertainment and film screenings. “So often people truncate or summarize what they want to say so that their entire argument will fit in a text message or a tweet. For a few days, we want to change that. We want to host candid, unhurried discussions in order to explore more profound themes. This is what the festival is about. It is a return to real conversation, a celebration of this,” says Cristina Fuentes, the director of the Hay Festival for Latin America.

During four days, there will be talks on literature, politics, art, journalism, philosophy, and music.

Two winners of the Nobel Prize for literature will also attend: J.M Coetzee and Salman Rushdie. Poetry will be represented by Lee Maracle and Rosemary Sullivan, Valter Hugo Mãe, and Rachel Eliza Griffiths.

The topics of discussion are endless, and if you believe there’s no way of fixing the world, think again: don’t miss the dialogue between Spanish philosopher Marina Garcés and Dutch thinker Rutget Bergman. Tired of hate taking over the planet? Then meet Carolin Emcke, author of the book, Against Hate. Do you eat without thinking about what you are putting inside your body? It’s time to listen to Michael Pollan, creator of the series Cooked, as he analyzes the way we sustain ourselves, and what that says about each of us, and about society.

After being incarcerated by Russian President Vladimir Putin, Nadya Tolokno, member of the punk group Pussy Riot, has become a global activist for freedom of expression. In Cartagena, Tolonko will say whatever she wants, with no one to censure her. Jordi Montero will share his thoughts on what it means to be human considering the mind’s relationship with pain; and, David Riefenstahl will explain why, at times, it’s better to forget the collective past rather than hang on to it.

Scientists Christophe Garlfard and Gabrielle Walker will host a conversation on climate change, and Erling Kagge will explore the importance of silence in our lives. The editor of New Yorker will speak about journalism in the age of lies, or, as they call it now, the age of “post truth.” Gerardo Bongiovanni and Jorge Quiroga, the ex-president of Bolivia, will talk about the rise of populism.

Anthropologist Agustín Fuentes will give a dissertation on the origins of creativity, and Spanish professor and winner of the Global Teacher’s Prize, César Bona, will speak about new forms of education.

If you want to examine the world we live in, gain a better understanding of the past, present, and future, and have fun while doing it, Cartagena is the place to be from January 25 to 29.

As Hay Festival is one of the most coveted events in the literary year, hotels get booked, and unless you have a place to stay in Cartagena, best arrange accommodation soon. Entry tickets to the lectures and concerts can be purchased by registering online at hayfestival.com/cartagena or directly from the box office of the Teatro Adolfo Mejía.

Tickets go on sale Monday 22 until Sunday 28 and are priced $30,000 pesos per event. For the complete schedule of the 13th Hay Festival visit the festival’s website.