Netflix’s Narcos is nothing if not ambitious. With ten hours of largely Spanish-language drama shot almost entirely on location in Colombia, a multinational cast and a Brazilian lead actor, it’s hard to imagine how Narcos ever got greenlit.

But Netflix is famous for taking risks.

Thus we have Narcos. On the one hand, it’s probably the most extensive U.S. production ever filmed in Colombia. On the other, it’s thorn in the side of those who wish the world would finally drop its fixation on Colombia’s cocaine past and acknowledge the country’s massive progress since the Pablo Escobar era.

One of the most pervasive themes in modern Colombian film is a looming, inescapable past.

Indeed it is that progress that allowed Netflix to film in Colombia in the first place. And it is drawing more and more international productions to the country, particular in the wake of a 2012 law granting substantial incentives to film in Colombia.

Colombia deserves a major international production focused not on the nation’s infamous drug industry but rather on its natural beauty, its incredible people, its rich pre- and post-cocaine history or any number of other topics.

But the fact of the matter is that drugs are still a big problem in Colombia.

Even Colombia’s own film industry is rather fixated on the country’s drug-fueled conflict, at least in the background. Well-regarded Colombian films like La Vendedora de Rosas (The Rose Seller), Los Colores de la Montaña (The Colors of the Mountain) and La Virgen de los Sicarios (Our Lady of the Assassins) all deal directly or indirectly with the country’s drug violence.

One of the most pervasive themes in modern Colombian film is a looming, inescapable past colliding with an unpredictable, intimidating future. Protagonists are usually trapped somewhere in between.

It’s a metaphor for the country’s present situation: still plagued by a reputation for drugs and violence, struggling to show the world a better face.

So Narcos probably doesn’t warrant some of the criticism it has received for reviving — and, more problematically, glamorizing — Colombia’s most notorious criminal. But it certainly deserves to be called to task for its shallow, often inaccurate depictions of Colombian culture and life.

The most obvious example is casting Wagner Moura, a Brazilian actor, as Pablo Escobar in a role that requires him to speak Spanish throughout the show. Moura gives it a good shot, but Escobar’s thick Antioquian accent is so distinctive and iconic that it would be tough for anyone but a Paisa to pull it off.

It’s also tough to get a good sense of geography since Narcos often films Bogotá for Medellín. And despite the fact that Bogotá scenes were actually shot in the capital — meaning that the cast and crew knew full well what the chilly, often dreary weather is like — characters walk around in short-sleeved shirts and wipe their brows.

Whether or not you were able to make it all the way through Narcos, here are five other shows, documentaries and movies you can watch on Netflix that depict Colombia’s drug conflict more accurately, or at least with real Colombians.

We all feel embarrassed by or ashamed of our parents at some point. But none of us has anything on Juan Pablo Escobar – a.k.a. Sebastián Marroquín – who offers an unprecedented intimate look at what it was like to grow up in the center of Colombia’s cocaine trade in this award-winning documentary.

The son of Pablo Escobar currently lives in Buenos Aires under a false name. His story, in his own words, is a powerful reminder of the flesh and blood repercussions of the drug conflict.

It’s not technically a Colombian film, but this documentary tells the story of the cocaine trade from the smugglers themselves.

Cocaine Cowboys paints a picture of 1970s and 80s Miami as a city living its glory days, with lavish parties, unbelievable houses and glamorous nightlife all fueled by the cocaine trade.

That’s a wholly unrealistic depiction for the millions of people whose lives were destroyed by cocaine-fueled violence and addiction. But Cocaine Cowboys at least offers insight into the deranged minds of the people who fanned those flames.

Think of Narcos as a quicker, dirtier version of this expansive and mostly well-acted Colombian TV series. El Patron del Mal delivers production values that sometimes skirt telenovela territory, but plotlines are consistently entertaining and the accents are spot on.

It’s also a somewhat more complex depiction of Pablo Escobar than Narcos, presenting a family man, a success story and a nightmare but never a true hero. And being a Colombian production, El Patron del Mal just “gets” the quirks and intricacies of this deeply Colombian story, not to mention the complex emotions it inspires.

More than a few reviewers have called El Cartel de los Sapos the Colombian version of Scarface. That’s a bit of an oversimplification, but the movie does offer an interesting fictional look at Colombia’s cocaine trade in the post-Pablo Escobar era.

Two best friends rise from small-time crooks to drug barons with the North Valley cartel, which operated out of the Valle del Cauca. But a DEA agent eventually tracks them down, leaving them with a tough choice: snitch or face extradition and imprisonment in a U.S. jail. It’s a fast-paced — if shallow — action flick.

Metastasis isn’t about the cocaine trade per se, but the Colombian remake of the wildly popular Breaking Bad works as an interesting, sometimes bizarre translation of that U.S. show’s darkly satirical take on the methamphetamine epidemic.

Crystal meth isn’t nearly as big of a problem in Colombia as it is in the United States, but it’s certainly worth pointing out that cocaine isn’t the only problem drug in the country.

Netflix’s Narcos is not without its merits. If nothing else, it proves that filming a major production in Colombia is totally within reach for international studios. And as Colombia further opens itself up into a post-conflict era, expect more films and shows like it to pop up.

Let’s just hope that those shows, movies and documentaries build on the successes of Narcos and learn from some of its mistakes. And maybe before too long we’ll see an international production about Colombia that leaves its infamous past behind. 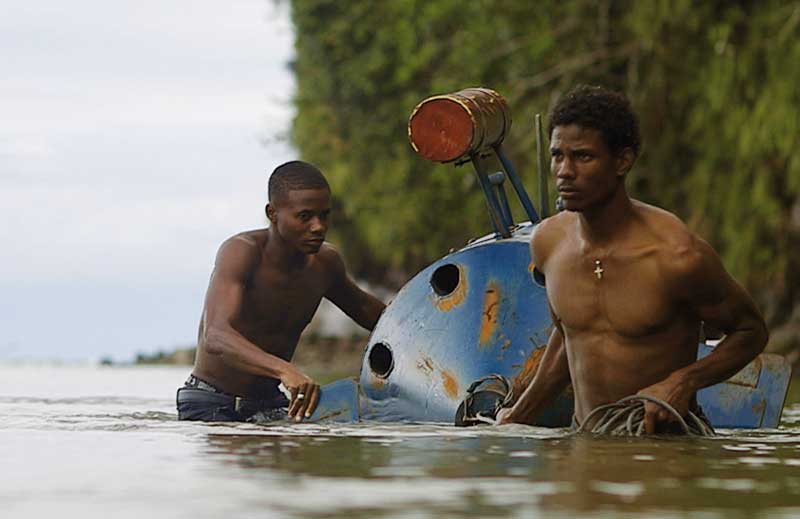 ‘Dirty hands’ in the Pacific